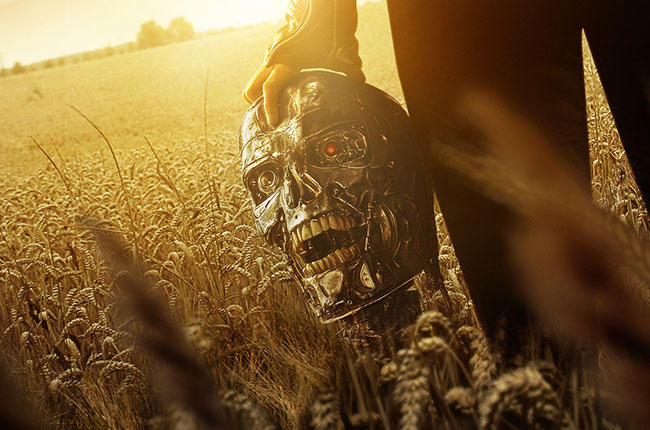 The biggest question for Terminator: Genisys was whether or not it would be more Judgement Day, and less Salvation.  The difference between two films in the same franchise is more than just screenwriters and directors, and twenty years.  I don’t know that I could trust anyone who says they’d rather watch T4 over T2.  There’s no place for that kind of thing in today’s society.

I’m also in the middle ground of fans who like the third film, Rise of the Machines.  It’s nowhere near as good as T1 or T2, but it has its own kind of fun, and I enjoyed that a movie from a big studio would allow that kind of an ending.  But T3 is lumped in with many a third entry in franchises, and disliked by quite a few.  So the unenviable task for Genisys is if it can stand next to the original and Judgment Day. 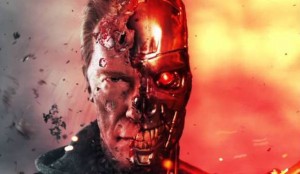 As much as I was looking forward to a reinvention for the Terminator, it does not stand with those revolutionary films.  It’s not nearly as bad as Salvation, but I think I’d still prefer to watch Rise of the Machines over Genisys.  Which pains me to say, because this newest entry isn’t really bad, it just doesn’t live up to its potential.  If not for a few miscues it could have really been a great movie.

Genisys follows the basic story laid out by previous entries, and I swear a few nods to even the third and fourth films.  Going all the way to the 80’s original, human savior leads a revolt of humans in a victory over the machines that have enslaved and exterminated the earth’s population.  However, the program governing the machines, Skynet, launches a final offensive by sending back a Terminator cyborg to kill John’s mother Sarah before she can give birth to the greatest leader in human history.

John sends back Kyle Reese, one of his soldiers and the man destined to father John while in the past, to protect his mother and ensure his birth.  All this is as it was in previous movies, but now as we see Reese sent back, there is an attack on John, and history is changed from what we know it to be.  Reese has double memories of two timelines, another Terminator was sent back to protect Sarah at a younger age, and a few other mysteries linger as to what ramifications these changes have had.

This is just the latest in a series of franchise filmmaking to use the newest plot device, thanks to time travel, of “resetting” a fictional history so as to be able to explore familiar territory in new ways.  The first J.J. Abrams directed Star Trek film did this famously, or infamously, and might now seem to be a way to revitalize other franchises such as Terminator.  And honestly, it wasn’t too bad of an idea, but the execution was just a wee off.

The best I can surmise is that the more digital we get in society, and in movie making, the more the product suffers.  Just as in Jurassic World, digital special effects and a more modern look take away from what we’re seeing.  Watching that movie, and now watching this, I couldn’t help but think how much better the effects looked in the older versions.  This is especially true when you see the T-1000 of Genisys, a creation that doesn’t look nearly as good as his 1991 counterpart did.

These new movies lack that sense of feeling, of a world that’s lived in.  The best comparison would be the original Star Wars movie to the prequels.  The aesthetic is too clean, too refined.  In Genisys, we see future soldiers of humanity who are far more organized and uniform (even with their uniforms) than I remember in the original Terminator.

And in a movie about man versus machine, we need better actors than what we have here.  The person with the most personality is the cyborg for the love of Pete.  I really have nothing against Jai Courtney, except for the fact that he seems to be taking a lot of roles from actors who would be better suited for them.  Here we have a Kyle Reese who could be the stand in for a lower budget Terminator instead of an everyman like Michael Biehn or even Anton Yelchin (one of the bright spots of Salvation).  It’s a real downgrade for the character.

Emilia Clarke, girl from Game of Thrones, is in a tough spot as Sarah.  Who in her right mind would want to follow in the footsteps of Linda effin’ Hamilton?  But she does pretty good in the role, caught somewhere between the Sarah who has yet to discover her importance and the one who escapes from an institution and teaches her son how to save the world.

I will say that J.K. Simmons has a pretty interesting role, and when it is made known who he is, one can see where the writers are going with him.  It’s small for Genisys, but I have a feeling he becomes much more in future installments.  That’s if we can get there through this first movie in what is a proposed trilogy, and it makes the oodles of money it needs to.

A lot of the disappointment with the Terminator movies as we continue along, I think, stem from what could be described as a feeling that the movies are simply retreads of material we’ve already seen, and places we’ve already been.  Not just that, but also because there is quite possibly a gold mine of stories that could come out of the mythology, and we haven’t seen them because those in charge are playing it safe. 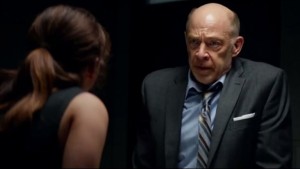 The thing about Genisys, however, is that the conceit of the story has the audience deliberately witnessing ground we’ve already covered as being essential to the plot.  It’s a mix of the aforementioned 2009 Star Trek and Back to the Future Part II.  I’m hoping it’s something that is a necessary hump to do what they need to do in order to move forward.  If not, it might be time to bring in new blood, er, circuitry, or abandon the series altogether before even the original films are tarnished.

As much of a retread is needed for this story to be pulled off, there was one twist that is a HUGE departure from the Terminator mythology, and they gave it away with second damn trailer released for the movie!  I don’t normally care about spoilers, but when you put in the trailer and ON THE POSTER that John Connor has been changed into a Terminator…W.T.F., indeed.  In a movie where we really have seen everything it’s got to offer, why give away the one thing that could have been a great holy shit moment? 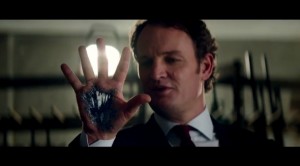 One last note, and we have Marvel to thank for this trend, there is a small scene mid-credits. So, yeah.

The franchise isn’t yet terminated, but it’s going to have to be better than this to survive its own judgment day.