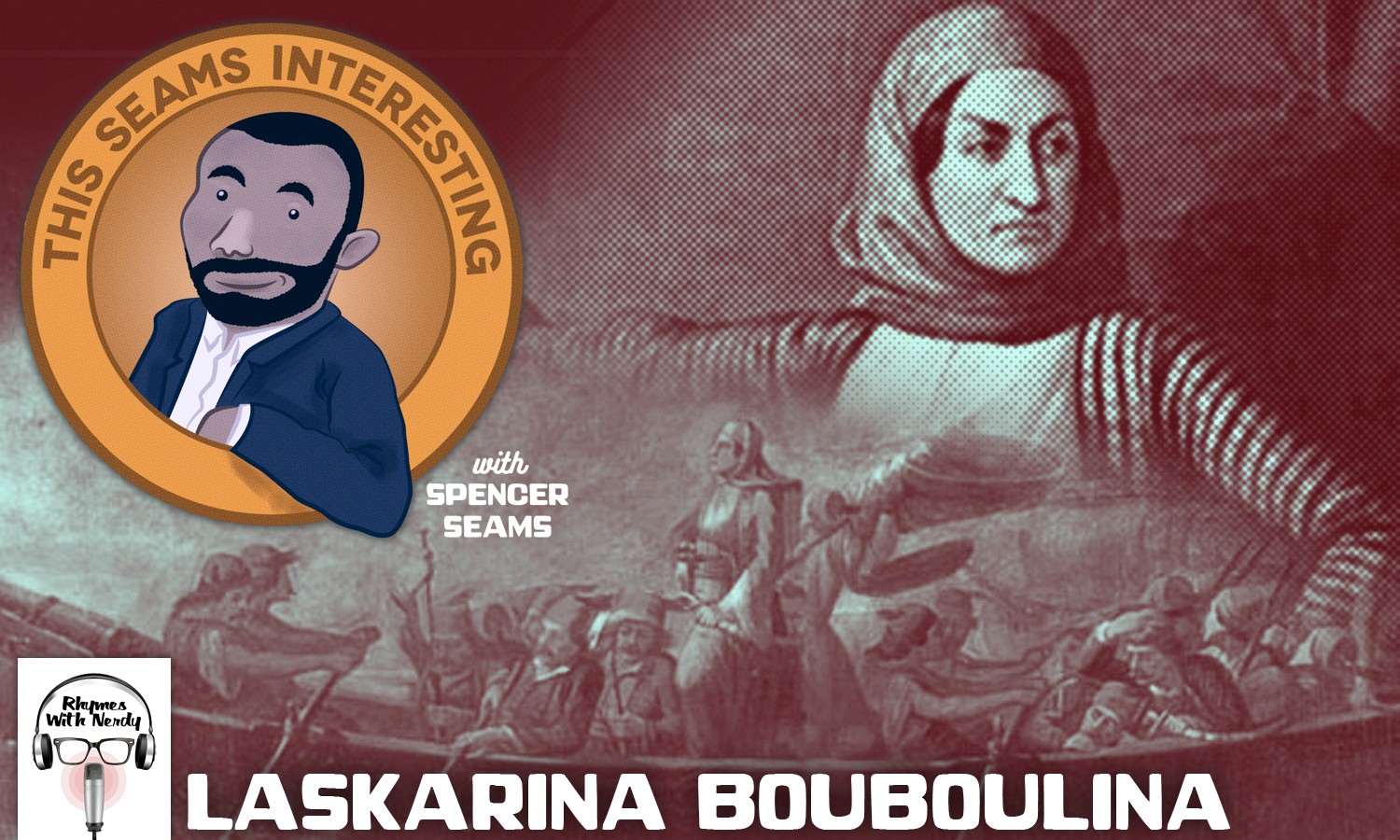 Hello and Welcome, Fellow History Lovers. This Seams Interesting is a column highlighting weird, overlooked, and ignored people and events throughout history.

When it comes to Greek history most people know about Aristotle, Homer, Alexander the Great (I know he was Macedonian but that’s a story for another day), and the Olympics. Arguably the most fascinating aspect of Greek history is the War of Independence. One of the integral figures in the fight was…

LASKARINA BOUBOULINA: Greek Goddess of the Sea, Revolution, and Spetses

Laskarina was born to Stavrianos and Paraskevo Pinotsis on May 11, 1771 on the Greek island of Hydra. The Greece she knew wasn’t the center of intelligentsia from the Classical period. It was a Greece under the boot of the Ottoman Empire since the 15th century CE. By this point, things were changing. There were several attempts at revolt but they failed. The latest around Laskarina’s birth, the Orlof Revolution, involved her father Stavrianos.

He was arrested and thrown in prison for his part. Paraskevo visited him frequently. His health was failing but they had Laskarina towards the end of his life. Her father died in prison when she was still a baby. When Laskarina was 4, her mother remarried a Navy man, Capt. Dimitrios Lazarou-Orlof. This took them from their home island of Hydra to Spetses nearby.

She loved hearing stories about the sea and majestic tales of bravery on the mighty ocean. Not much is known about her childhood. At 17, she married Dimitrios Yiannouzas. He was a rich sea captain with his own fleet. They had 2 sons, Yiannis and Yeorgo Yiannouzas.

After a few years, Dimitrios was killed fighting pirates. Laskarina inherited his fortune and ships. She remarried in 1801. His name was also Dimitrios, Dimitrios Bouboulina. They had 5 kids together. He was also a rich sea captain with a fleet of ships that died fighting pirates. In 1811, Laskarina was widowed again. She inherited even more money and ships. Laskarina successfully and smartly invested which in turn made her and her family one of the wealthiest on Spetses.

Now, this brought the attention the Ottomans at her door. In 1816, they claimed that they had the right to seize her money, ships, and home because her second husband was fighting under the Russian flag during the Turko-Russo War. He was a traitor and enemy of the empire. This was true but Laskarina had a plan. She sought out the Philhellene Russian Ambassador in Constantinople. He liked her and understood her anger. Czar Alexander, gave her a house in the Crimean Black Sea region of Russia to stay in until the Ottomans gave up. At this time, she joined the Filiki Etaireia, a revolutionary Greek group that was scheming another rebellion. In English, Filiki Etaireia means, “The Friendly Society.”

After 3 months in Russia, she returned to the Spetses. Filled with the spirit of revolt, she bought arms, built warships, and raised a private army. She was an ally to the revolutionaries, and aided them with soldiers, ships, and money. The lead ship of the fleet, The Agamemnon, was built for her specifically. She would lead naval assaults on the Ottomans. Not only was she a beneficiary to the cause but also she trained as a soldier and made it the rank of Admiral.

The Ottomans became suspicious of all this odd behavior of guns, ships, and strange people around her. She paid off the Ottoman officials inquiring about this with a hefty bribe. They left her alone after their payday.

The Greek War of Independence broke out March 13, 1821. Her first major victory was at Nafplion. The Ottoman naval fort was armed with 300 cannons. The Greek naval siege didn’t work so they landed nearby at Mili. Laskarina organized her troops and led a land siege at the powerful fort. After a long and arduous battle, they took the near impenetrable fort. She also fought in the Battles of Monemvassia, Siege of Tripoli, and Haradros. Her son, Yiannis, was killed at Haradros.

As a reward for the victory of Nafplion, she was given a house, the Greek forces took. In 1825, she sold the house. Nafplion was rife with political unrest. The Greek war hero and important leader for the Greeks, General Theodoros Kolokotronis, was sent to prison at the time. She saw the writing on the wall and left for Spetses.

Turkish-Egyptian forces were on the war path to take back what the Ottomans had lost. Laskarina and his officers were working on war plans when they got word of this oncoming attack. The Koutsis, another rich family on Spetses, had a major problem with Laskarina. Her son, Yeorgo had eloped with a Koutsis. One of Koutsis shot Laskarina for what her son did. She died from the gunshot wound.

Laskarina Bouboulina was made an admiral in both the Russian and Greek Navies for service. She has been a national Greek hero since her untimely, petty death. Luckily, the Greeks with help from Russia and others won. Even though she didn’t do it alone, Laskarina Bouboulina was a major player in making the Greeks a freed people and establishing Greece as we know it today. She rose from the ashes into an icon of bravery, courage, and determination.

Next ArticleCan We Just Be Friends? Episode 73