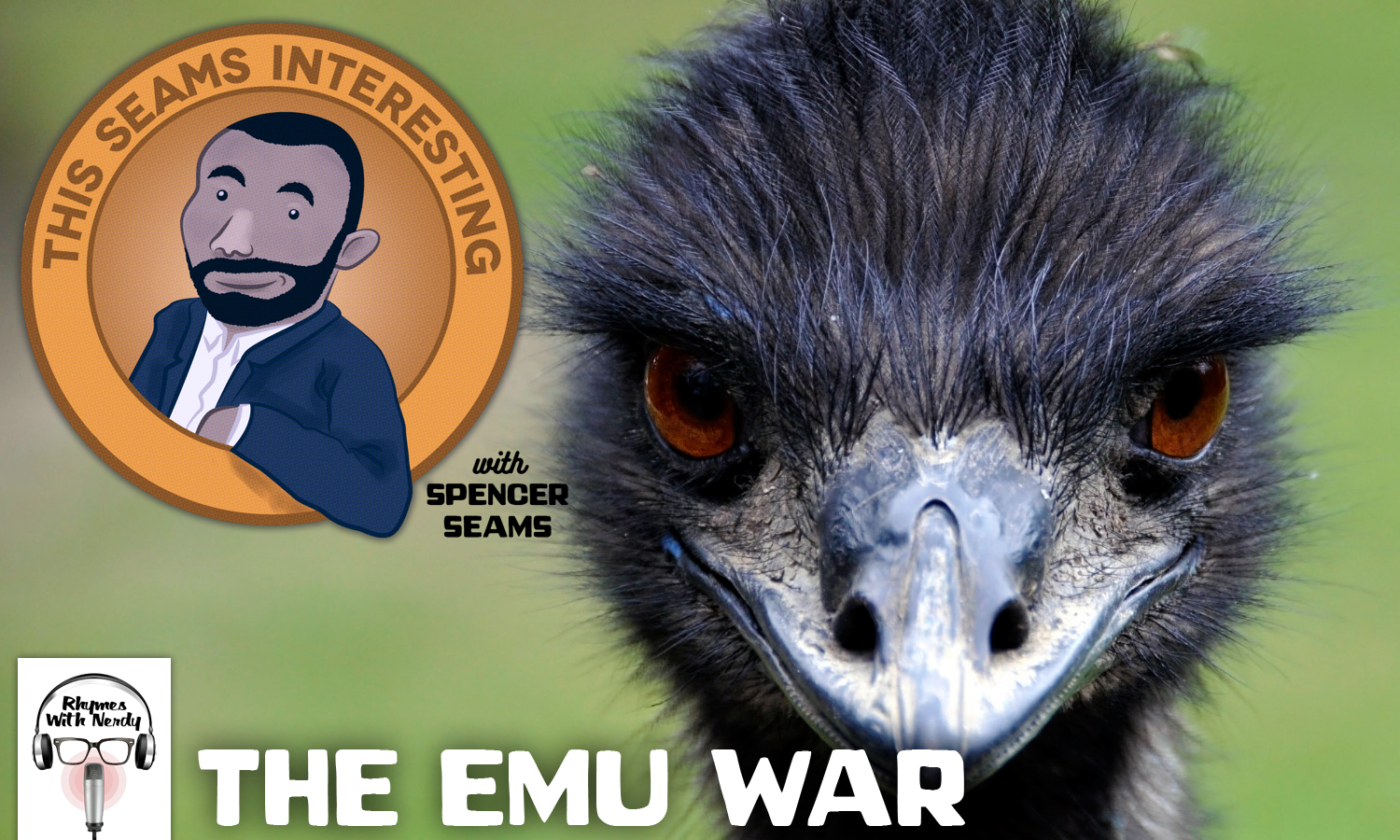 Welcome to the inaugural edition of This Seams Interesting. This will be a monthly series highlighting interesting, weird, and overlooked events and people throughout history. June’s topic is…

EMU WAR: Birds of a Feather Stick Together

What do you get when you combine the Great Depression, the Australian Wheat Board, the Lewis Automatic Machine Gun, Emus, and World War I? The Great Emu War of 1932, that’s what.

Despite the name Emus weren’t the initial cause. This chain of events starts during World War I because of wheat. With thousands of soldiers returning to Australia, the Australian Wheat Board (established in 1915, under the Labor Party’s Billy Hughes administration) figured this was a golden opportunity to get a mass of new farmers to Western Australia. Farming in this area is known for being difficult. It would boost the national economy and give veterans jobs. The primary crops grown in this region are wheat along with other cereal grains. In order to get the soldiers interested in growing wheat, the Agriculture Department told them that they would receive subsidies for these crops. It worked. Thousands took up this opportunity.

Naturally, things were supposed to go great from here but they didn’t. The Agriculture Department never fulfilled their promise of subsidies. On top off that, the price of wheat was on the downfall and kept falling. The Great Depression hit in 1929, this only sunk the situation further. In the fall of 1932 around September. Roughly 20,000 Emus migrated to this newly transformed farmland utopia. It had plenty of water and food. The food that these flightless fowl loved so much was wheat. Also there was a drought ravaging Australia at the same time. The winter rains were one of the key sources for irrigation. The Emu only made things worse.

Prior to this however, the ex-soldier farmers fought back. A byproduct of the Emus coming through was also allowing rabbits and other pests to eat the crops along with them. The farmers killed as many Emu as possible on their own but this didn’t work given 20,000 more Emus would come through a few years later.

Emu went from a protected species to “vermin.” The only logical conclusion to this problem was the Lewis Automatic Machine Gun. Step 1 was simple, kill Emu and thus stop them from consuming the wheat fields. This was the solution the farmers proposed. The farmers didn’t go to the Minister of Agriculture, who was at the time Joseph Lyons (he was also the current Prime Minister). Charles Hawker, the previous Minister of Agriculture had retired in protest due to getting lower pay on September 23. The farmers didn’t trust the Agriculture Department so they contacted the Minister of Defence, George Pearce. He agreed to it but with two conditions. They were; only trained soldiers can operate the guns, and a cameraman from Movietone will film the campaign.

The Lewis Machine Gun was chosen because the veteran farmers saw how powerful it was in WW1. This was their only hope. The Royal Australian Artillery sent 7th Heavy Battery commander Major G.P.W. Meredith to manage the campaign.

So far only humans have been discussed, here’s a little information about Emus. They range between 5 and 6.5 feet tall when fully grown. Emus travel in large groups across the harsh Australian outback. They migrate to the North for the summer and South for the winter. They can jump up to 7 feet. In a sprint their stride can go up to 9 feet. Plus they have excellent eyesight. Intelligent and savvy, they swiftly adapt to their environments and challenges presented their way. These birds aren’t dumb dumbs.

On October 18, 1932, Maj. Meredith brought 2 Lewis Machine Guns, 10,000 bullets, 2 soldiers to operate the weaponry, and a Movietone cameraman as per the agreement. They hoped to encounter a mob of Emu soon but it rained and the Emu scattered before Meredith’s men could engage. The next few days followed a repetitive pattern. They see a bunch of Emu, get closer to Emu, shoot at the Emu, and the Emu run away. Meredith underestimated how fast and smart these birds were. After a few skirmishes, the Emus figured out the range of the guns. So they if saw Meredith and his men they knew how far to run to and be safe. So Meredith came up with a brilliant idea, catch up to them with jeeps and shoot them from there. This didn’t work. The gunners couldn’t stabilize the machine gun enough to get a clear shot when speeding through the outback. No Emus were killed using this tactic. You can only imagine how frustrated Meredith had to be by this point. The Emus were winning. Well, they kept eating delicious healthy wheat.

The humans figured that if they wait at a watering hole a pack of Emus would eventually stop by. A pack of 100 or so Emus did stop by a nearby watering hole where the soldiers were waiting. They assumed that one machine gun would be enough. After 12 bullets it jammed and the Emus escaped. They fixed the jam but it was too late. They continued ambushes but it wasn’t enough. Everything they tried didn’t work. Every place the Emu were ambushed, they never returned. It was an endless game of catch-up. Remember the thing that caused this whole thing was wheat.

The Parliament recalled the effort on November 10, 1932 because it was a waste of time, financial sinkhole, and embarrassing. They had used 2,500 of the allotted 10,000 bullets. A few days later though it was resumed. It was still a failure. They killed more Emu but not enough to stop them going through wheat field. On December 10, 1932 it was recalled for good. Meredith had spent 9,860 bullets out of 10,000. No humans were killed. Some Emu were killed but the numbers aren’t definite. Meredith claimed over 2,000 birds were killed but this is most likely bullshit. It was never confirmed. It’s speculated to be in the hundreds not thousands.

The Australian Royal Army lost the “war.” It was barely a war. Meredith himself said it would be good target practice. Which it was but at the cost of federal money and even more irritated farmers that had to let their livelihood die out. The Emu continued their rampage on wheat. The farmers requested military action in 1934, 1943, and 1948. They were declined each time.

The primary reason it isn’t famous, has to be it’s embarrassing. It’s perfectly understandable. This was a perfect storm of overconfidence, poor planning, and bad luck. On paper it was supposed to be a breeze but these feathered flightless fowls outlasted and outsmarted the Australian military and farmers in Western Australia. At its core this sounds like a B-movie you’d see on MST3K but it isn’t.The craziest thing about this was that the Australian government or anyone at all thought this was a good idea. The only good that can be gleamed from this is that it shows only quickly a grassroots, local issue can get federal attention. Humans lost a war to Emu, this really happened.

Next ArticleCan We Just Be Friends? Episode 45