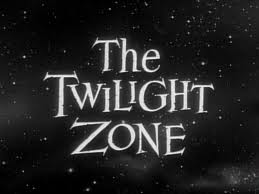 “There is a television program, an elegant, enigmatic element of entertainment that engaged and ensnared the collective consciousness of American culture. That very program challenged, changed, and contorted culture considerably for decades afterwards. That program is, The Twilight Zone.”

Today at exactly 10:00pm will be the fifty-fifth anniversary of the aforementioned, The Twilight Zone. Everyone knows a few of the iconic episodes, ‘the one with a crazy twist ending,’ ‘the one with the Shat man on a plane,’ ‘the one with the talking doll,’ ‘the cookbook one,’ etc. Some of you reading this might be thinking, “So what?! I care about new things: cool, modern and sexy things like Game of Thrones, not boring ole’ Rod Serling and Buck Houghton.” Well, for those of you thinking that, George R. R. Martin wrote on the 80’s reboot of TZ. It unlocked the floodgates for nerdy entertainment in pop culture like Game of Thrones.

The Twilight Zone ran for five seasons, 1959-1964. In the fourth season they experimented with the hour long format but reverted back to half hour format for the final season. Not every episode was amazing, there were a few stinkers here and there but they hit more than they missed. Rod Serling created, narrated, and wrote the show with a staff of other highly influential writers like Richard Matheson – I am Legend (1954) and George Clayton Johnson – Logan’s Run (1967). The show tackled important social issues like war, race relations, and love struck computers much to the chagrin of CBS. There were numerous cases of ‘before they were famous’; Billy the Shat man in Nightmare at 20,000 Feet, Charles ‘No Dice’ Bronson in Two, Richard ‘Jaws’ Kiel in To Serve Man, Cloris Leachman in It’s a Good Life, Richard Donner directed Nightmare at 20,000 Feet, Don Siegal directed Uncle Simon, and countless others.

On paper there is nothing mainstream about it. There were aliens, parallel universes, time travel, immortals, androids, monsters, and cowboys. Those things aren’t what most people are interested in but somehow Rod Serling and crew made it accessible. It hit at the exact right time at the exact right place. It wasn’t the first show like it however. Anthology shows had been since early radio. A few other TV shows laid the foundation. They were Tales of Tomorrow (1951-1953), Alfred Hitchcock Presents (This premiered exactly four years before TZ, October 2, 1955; 1955-1965), and One Step Beyond (1959-1961). All of these are on DVD, Hulu and Netflix, if you’re curious.

My personal experience with TZ is odd. As a kid I always caught it in passing. It was until very recently ‘that weird show my mom likes.’ The only episode I knew of was Eye of the Beholder. The pig faces were permanently branded onto my brain. At the time it registered as confusing, boring, weird, and for old people. I noticed earlier this year, it was on Netflix and figured why not give it a shot. I instantly loved it. It felt like when you get a gift from your grandparents but you dismiss it immediately then, a year later you realize just how awesome it is. It’s become my new go-to thing to watch and I discovered a whole new dimension of TV. So let’s celebrate this momentous day by joining Rod Serling in The Twilight Zone. 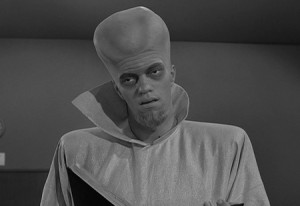 Number 12 Looks Just Like You – Season 5, Episode 17; This is similar to Eye of the Beholder. It’s about society’s standards of beauty and the pressures that come with it. Eye is too famous for its own good and lost some of its effectiveness. No. 12 takes the theme really runs with it in a cleverer way. It’s my favorite episode.

Judgment Night – Season 1, Episode 10; I have a soft spot for the military episodes. This is the story of a German soldier in WW2 that suddenly appears on a British civilian ship. As you watch you’ll learn how and why he got there. It’s like a Greek Myth with Nazis.

The Obsolete Man – Season 2, Episode 29; This is a beautiful episode much in the vein of Fahrenheit 451 and 1984. A librarian, named Romney Wordsworth, gets the death sentence for being reading books. He’s in a world run by smug Nazi jocks. He gets to choose his own style of execution. It’s the perfect example how to have a simple message with layers of meaning behind it. Warning, it’s very heavy-handed. However, I can look past that and really enjoy it.

Mr. Dingle, the Strong – Season 2, Episode 19; Usually the comedy episodes don’t work but this one is amazing. The scrawny and weak Mr. Dingle gets super strength from Martians for an experiment. Imagine if Milhouse was given superpowers from Kang and Kodos and that’s this one. If you don’t like your dish of TZ served goofy, you will not like this. It’s extremely goofy. Also Don Rickles is in it.

The Monsters are Due on Maple Street – Season 1, Episode 22; This is a classic episode. I don’t have much to add that hasn’t been said before. Just watch it if you haven’t and again if you have.

People are Alike All Over – Season 1, Episode 25; I don’t want to say too much besides a couple of astronauts go on a space mission and things take a crazy turn. It’s more fun if you go in with nothing to expect.

The Changing of the Guard – Season 3, Episode 37; Imagine Dead Poet’s Society (1989) in the Twilight Zone, it’s basically that. A young Donald Pleasance with terrible old makeup and a weird beard stars in this bittersweet Christmas tale. It’s one of the best sentimental episodes.

The Big, Tall Wish – Season 1, Episode 27; This is about simply believing in magic and the power of wishes. It’s also about alternate realities. This is a refreshing change of pace with a nearly all-black cast. It’s one of the most interesting episodes in that, it’s very grounded compared every other episode and exudes an infectious air of childlike innocence. It’s gravely underrated.

I am the Night – Color Me Black – Season 5, Episode 26; This is another heavy-handed one. It might be a little much for some but should give it a shot. A man is sentenced to death and the town excitedly waits for his death. The sky is getting progressively darker as they get closer to the hanging. Again, the message is very obvious.

The Mind and the Matter – Season 2, Episode 27; I knew I was going to love this one once I saw who was starring in it, Shelley Berman. He’s a fantastic standup from the 50s and 60s. Our hero, Archibald Beechcroft, learns how to change reality with only his mind. It’s similar to the movie Lucy (2014) but smarter, better and making a point.

-Five Characters in Search of an Exit – Season 3, Episode 14

-The Masks – Season 5, Episode 25 *only episode directed by a woman and an actor/actress from another episode, Ida Lupino

Like all right thinking people, I’m a fan of The X-Files. Yes, there were those two seasons where Mulder was replaced by some liquid metal NEW YAWK COP and there were supersoldiers and whale songs and who knows what the fuck Season 9 was trying to do, but I remember the good before the bad.…

You know that movie where the average, normal guy, played by a handsome Hollywood hunk, meets an equally regular and relatable woman, played by a bodacious babe. Not that one, you know the one where they fall in love then fight then make up and get married and have a baby. No, the one where…

Next ArticleEpisode 43 - The 12th Doctor!