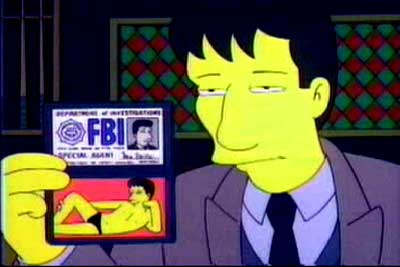 Like all right thinking people, I’m a fan of The X-Files. Yes, there were those two seasons where Mulder was replaced by some liquid metal NEW YAWK COP and there were supersoldiers and whale songs and who knows what the fuck Season 9 was trying to do, but I remember the good before the bad. End your DVD collection with the seventh boxset and you’re good. Oh, I Want To Believe was fine too and a 100% accurate depiction of homosexual relationships. I was prepared to leave it at that, give or take some “authorized” comics that revealed the Lone Gunmen faked their deaths and were working underneath the Arlington cemetery, and news of the FOX six episode miniseries left me with mixed emotions. It could be good, but it could be shit, you know? I’m a fan of letting things end. Franchises be franchisin’, I get it, but sometimes things can end with dignity. You don’t need to have a fucking Freaks and Geeks comic from IDW or Brisco County Jr.: The Next Generation. Nonetheless, here we are, and I’m happy to say that not only is the first episode of X-Files Season 10 not terrible, it shows that taking the series out of the mothballs is worthwhile, that the creative team (creator Chris Carter, the Super Morganio Brothers, James Wong) still has things to say and that they’re worth saying. That said, they make a mistake right off the bat in titling the debut episode “My Struggle.” Sure, Mulder believes there’s a small cabal of rich and powerful individuals who use their influence to run the world, that they may be less than human, but…um…what point was I trying to make again? 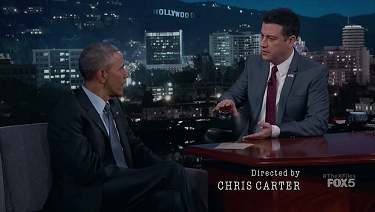 Early on the episode introduces a new yet familiar villain.

Right off the bat astute viewers will know the premiere is written by Chris Carter because the episode begins with a long-ass voiceover by David Duchovny, reiterating the premise of the series and filling in the gaps between 2002 and today. It’s followed by the classic series opening with the addition of Mitch Pileggi as Walter Skinner in the main cast. Everything else is the same, and that’s a relief coming from someone who fucking hated the last two seasons’ openings with that falling David Duchovny stunt double bullshit. When we last left our heroes, Mulder and Scully were living together, he a hermit/bum and she the breadwinner doctor at Our Lady of Sorrows Hospital (“Lady at Sad Time” in my notes). Now they’re apart, Mulder watching Jimmy Kimmel clips on MindQuad (YouTube for bums) and Scully is helping earless children…have ears, I guess. Chris Carter has indeed broken them up and it’s created a tension between the characters. It’s an annoying but understandable change, because I have to imagine Scully would eventually get sick of the chronically unemployed Mulder saying “hey, Scully, did you see this about crisis actors? I’ve seen the same woman at Sandy Hook and Aurora” and “people take too many showers, Scully”. Frankly it’s a miracle Mulder survived the break-up; can you imagine him even shopping for groceries? By week two of post-Scully living he’d be running on Cheerios dust and orange juice pulp. I’ll be optimistic and say Mulder looking like garbage throughout this episode was an acting choice on Duchovny’s part and not a lifestyle choice. Despite the breakup, the two characters’ chemistry is as good as ever. That’s a quarter of the battle right there.

Skinner reunites them by asking the two to meet with Tad O’Malley (Joel McHale, Deliver Us From Evil), an Internet TV host who believes in the second amendment and 9/11 being an inside job. Alex Jones if he didn’t look like a fat piece of shit. Flimsy excuse for a reunion, yes? I like to think that Skinner is a secret shipper and looked for any contrivance possible to bring his favorite couple back together. “Yeah, uh, this guy on the Internet wants to talk to you both…no it’s not a sex thing…” O’Malley believes in UFOs and has a house in the middle of nowhere with a perky Russian girl to show Mulder and no, again, it’s not pornography. Remember, the only actor to reprise their role in The Sex Files was Mitch Pileggi, so. Sveta, played admirably by Nina from The Americans, is a multiple abductee with tons of marks on her belly and the alien-derived ability to determine the cause of the Mulder/Scully relationship deterioration. Oh, and she can sometimes move shit with her mind. She’s Jean Grey before she became the Phoenix, minus the implicit and explicit sexism. With some prodding she admits what did done tooked her babies away was men, not space people, further creating an emotional bond between her and Scully. 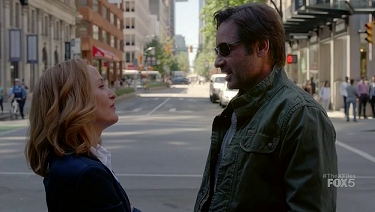 “Mulder…you…uh…so how about those Knicks?”

Meanwhile, Mulder falls prey to what now amounts to a recurring theme on The X-Files: overinvestment in a new conspiracy. Upon realizing Sveta was abducted by men, not moon men, he basically gets really high on cough syrup and bewilders his ex-girlfriend and his former boss with phrases like “fiction masquerading as fact” and “we’ve never been in more danger.” Pepper his speech with a couple of “man”s and David Duchovny would be playing my best friend from high school.

See, after hearing Sveta and going to see an ARV with his new buddy Tad, Mulder’s figured out what he figured out in Season 5: this ain’t about fucking aliens, it’s dudes pretending to be aliens. They’re using alien technology against us for…I dunno. A doctor from Roswell who’s now cosplaying as Simpsons writer George Meyer tells Mulder he’s close now that he’s been disabused of that faceless aliens setting people on fire bullshit. At this point I think it’s less that Mulder wants to believe and more he’s gullible as shit. God, if he had Facebook he’d fall for so many hoaxes. “I have to post this notice on my wall, Scully, or else Zuckerberg can use all my photos for commercial gain.” You’ve seen fucking spaceships, shapeshifters, your son can move objects with his baby mind, there’s been nine seasons of that shit and now you’ve gone for a new Alex Jones-tinged bundle of conspiracies because it’s the 21st century and a black man’s in the White House?

Joel McHale isn’t especially good in his role as slick stand-in for any number of tin foil hat wearers, his role in the episode consisting of being the Eddie Haskell to Mulder’s credulous Cleaver boys. “That’s a lovely suit you’re wearing, Ms. Scully! Can Mulder come out and conspiracy?” The introduction of yet another “everything you know is wrong” plot point justifies everyone who says the mytharc of the series is mired under a pile of gaffes and bad puns. 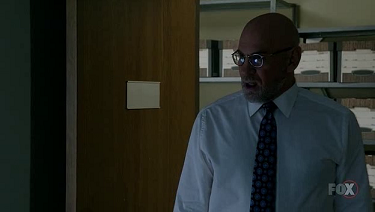 They missed a great opportunity to have Skinner open up the X-Files office, only to find Mulder sleeping on the floor, using the I Want To Believe poster as a blanket.

Scully brushes off the Mulder/O’Irish theory that is backed up by a clip montage as borderline treasonous, and the next day Nina from The Americans is admitting to a shitload of reporters that Tad paid her to lie about alien pregnancies and the like. “My Struggle” never establishes how popular Joel McHale is supposed to be, whether he’s Internet popular (Hannibal) or real people popular (The Big Bang Theory). Either way he’s rattled the cages such that THE MAN takes his website offline and the military blows up that alien replica vehicle that was shown off earlier. As for Sveta, an alien craft or humans joy riding on an alien craft blow her car up. She’s probably dead, but you never know, as goddamn explosions didn’t kill a now smokin’ through the throat Cigarette Smoking Man. Although the show makes some timely references to Uber and Billiam O’Reilly, I’m happy that they didn’t revamp CSM as a vaper. He’s unhappy that the X-Files has reopened; Mulder and Scully saw no other option, and someone wrote “DON’T GIVE UP” with the dust on Scully’s rear window. Scully is motivated partially by the fact that she got test results confirming both Sveta and she have some alien DNA all up in the genome, whereas I think Mulder misses being a person who has to shave regularly and know what a W2 is. I like how the episode establishes/restablishes that Skinner is gay for Mulder and would happily restart the X-Files if given the opportunity. This element helps to explain how two former FBI agents can get their old jobs back without a hitch 14 years later. Nepotism is great. 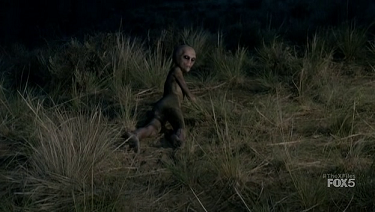 Alien practicing its Maxim pose in its final moments

From what I can tell, the purpose of this miniseries is to tell more stories with these characters and nothing more. Yeah, there’s mythology, but it’s not as though Carter and co. are taking six episodes to conclusively end things or provide answers at a higher rate than the drip feed so associated with the series. They’ve already trotted out the line of “well, if the ratings are good and it’s positively received, we’d love to do more”. Determining a TV show’s purpose and judging it based on that is necessary, and by that metric so far Season 10 is a success. It acquits itself in dealing with the fact that the nature of conspiracy theory has changed in the last decade and a half, becoming much more of the survivalist strain that was a brief patron of the 90s. The means of communicating conspiracy theories has changed too – the Lone Gunmen with their newspaper is as antiquated as newspapers now (I get all my news from Buzzfeed listicles). The script thankfully integrates this aspect without coming across as an old man trying to keep with the times. That does make me kinda want to see a revival that just keeps beefing it on the contemporary culture. Like, an episode about butt chugging that’s also about ghosts, or Scully having to go inside the Internet to stop a cyberbully. Mulder matches wits with an MRA whose hat tipping causes things to set on fire! The good thing about Mulder and Scully is they can star in enjoyably awful fare as opposed to the Doggett/Reyes pairing that’s just awful. 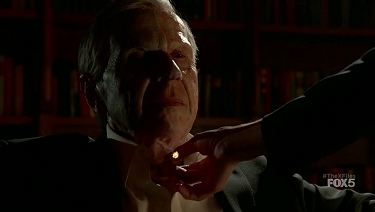 Goddamnit, FOX, you can’t show this! What if impressionable kids see this and get tracheotomies to emulate their favorite character who was last seen before they were born?!

“My Struggle” isn’t a great episode, and in some parts it’s not even a good episode (Chris Carter has not gotten better at info dumps with age). But it was necessary, a dose of medicine to get down so as to facilitate the rest of the miniseries. I have seen worse episodes of the mytharc that try to reposition it or place it in some sort of context – most of Seasons 8 and 9, for example. The important things are present in this premiere, like the chemistry, the mood, the atmosphere, even Mulder’s dry and sardonic sense of humor. I have faith that with the assembled creative team that this will only improve. It’s hard to fuck up a Darin Morgan script, after all. I’m on board to see what happens next and admittedly I’m susceptible to the allure of “your favorite characters, back and older than ever”. It feels like classic X-Files: shot in Vancouver, scored by Smallville‘s Mark Snow, dudes meeting in secret for reasons that don’t involve oral sex. It’s a better use of FOX’s timeslot than Gotham.

Next ArticleDeliver The Profile Episode 14: The Brotherhood of the Traveling Pornography