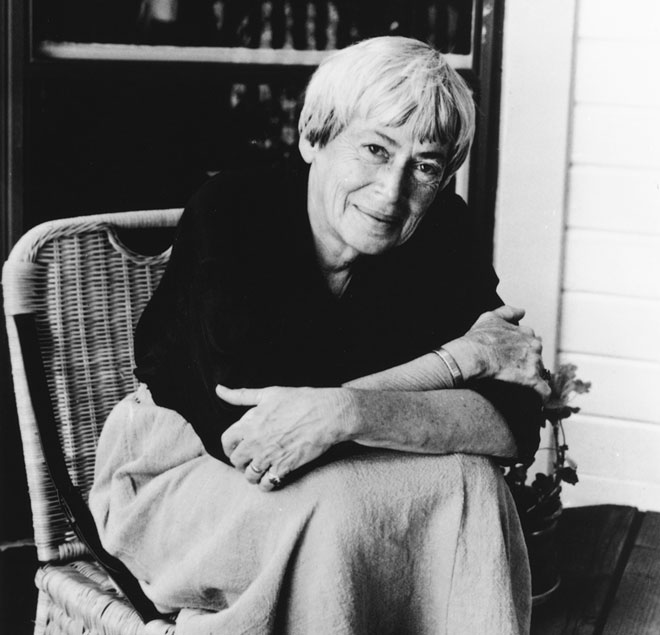 When most people think of science fiction/fantasy writers the usual names that pop up are Octavia Butler, J.R.R. Tolkien, Ray Bradbury, H.G. Wells, and, of course, Ursula K. Le Guin. Today Mrs. Le Guin celebrates her 85th birthday. For 85 years we’ve been lucky to have this wonderfully talented woman grace us with her writing.

I first heard of her only a few years ago when I discovered a Syfy movie called The Lathe of Heaven. When I hear of a Syfy movie my mind jumps to something consisting of forgotten 90s cultural icons, horrific CGI, pointless story, and colossal animals but this was different. The plot was intriguing and actually sounded good then I looked it up and saw it was based on a book. In place of watch a Syfy movie I bought the book. Prior to this however I didn’t like science fiction at all. Star Wars and Star Trek never hooked me as a kid thus kid version of me assumed science fiction was lame and boring. This book completely changed my mind. I had no idea science fiction could be interesting, engaging, weird, and cool. I started reading more of her catalog and started reading more science fiction. The Lathe of Heaven is the perfect sci-fi/fantasy novel. It’s extremely accessible, thought provoking, dense, and endlessly engrossing. Needless to say, it’s one of my favorite books.

Ursula K. Le Guin was born in 1929 to an anthropologist father, Alfred L. Kroeber, and a writer, Theodora Kroeber. Ursula was the baby and had three older brothers. Despite growing up in the Great Depression her family wasn’t affected by it. She has said that her parents were very encouraging and wanted their children to pursue what they loved. Ursula attended Berkeley High School, 1943-1947, where she attended and graduated with another notable sci-fi writer, Philip K. Dick. However, they didn’t know each at the time.

She received a B.A. in Renaissance French and Italian Literature from Radcliffe College in 1951 and a M.A. from Columbia University a year later. She continued down that path studying in France, but met a young historian, Charles Le Guin while there. They married later that year and he continued to get a Ph.D. and she became a French teacher. They had three children Elizabeth, Caroline, and Theodore.

She always had an interest in writing. The first short story she tried to get published was rejected but she was also 11. She stopped submitting anything for publication for a while but continued refining her skill. In the 1950s she wrote 5 novels but each was rejected for being difficult and inaccessible. She kept on writing. In 1961 things changed. She finally was published in The Western Humanities Review. Then had three more stories showed up in Fantastic Stories of Imagination. That was only the beginning.

She is mostly famous for The Left Hand of Darkness (1969) and The Lathe of Heaven (1972) and for good reason. They are truly classics of science fiction/fantasy. The Lathe of Heaven is a study of the difference between dreams, reality, and how we perceive it. It’s written in a stripped down, simplistic way so that you don’t have to be a fan of science fiction to fully appreciate and completely understand it. A high school kid that doesn’t like reading could read this and it will make complete sense. It strikes a perfect balance being true blue science fiction/fantasy and also being very accessible. The Left Hand of Darkness is on the opposite side of spectrum. It’s hardcore sci-fi. It’s not that accessible but it’s still great. This is a testament to her skill as a writer. She can go between complex and simplistic without losing anything in between.

One of the most important things to bring up in reference to Ursula K. Le Guin is glaringly obvious. She’s a prominent woman in the world of science fiction/fantasy. This may not seem like that much of an accomplishment but she is one of few women to reach godly levels in this arena. She’s won several Nebula, Hugo, and Lotus SF awards among other awards. The only other woman that writes sci-fi/fantasy that reached this level I can think of off-hand is Octavia Butler, and that’s unfortunately about it. It’s refreshing to see this just for diversity’s sake. If it’s possible for her to be successful in this field then that makes it easier for more women to join her and Octavia Butler up in Mount Olympus.

The role of gender and its effects on society is a frequent theme and backbone of her stories. Specifically, The Left Hand of Darkness, tackled this. It’s the story of an emissary visiting a world where gender is irrelevant, the people can switch between male and female. This of course has many shockwaves in that society. This and everything else she wrote utilizes psychology, sociology, and environmentalism to analyze and dissect society through a sci-fi/fantasy lens.

Mrs. Le Guin is without an ounce of doubt one of the best writers of the 20th century. Her mark on science fiction/fantasy changed it forever. She added a much needed new and interesting voice to a genre that’s still prominently white men. Even now, she’s still writing and putting out great, intriguing work. If you haven’t read anything by her, do yourself a favor and start with The Lathe of Heaven.

If you’ve read my previous articles on authors (Ursula K. LeGuin and Philip K. Dick) that I really love and appreciate, there’s a recurring element. It is movies. This one is no different. I had recently started high school and just discovered Stanley Kubrick. I wanted to watch A Clockwork Orange but learned that there…