Today is a very special episode of my column.  It is an after school special of sorts, dealing with a serious topic.  Mainly because I hadn’t thought of anything, and the following happened to hearken back to something I had thought about touching on in a previous column.

The Minnesota-based company Target (who should have fired all their PR people months ago) has yet another notch on the belt they’ve been using to beat society lately.  On the heels of data theft (which I really don’t blame them for), layoffs, and all around crappy management of those issues, Target has added a Photoshop scandal to the mix.  It seems that the retailer thought it best to alter the image on a product featured on the company website.

The image was for a swimsuit and the alteration made the model look as though the gap between her legs could house a small family of beavers (pun intended).  Needless to say, though I will, someone saw it and the image spread like wildfire across the Interweb.  Target had the image removed, but not before it had become controversial.  You know, the usual stuff about women and their self-esteem.  Though, the truly upsetting aspect to most people was the mess about the swimsuit being in the JUNIORS department.

So not only were there doctored photos of a female with enough room for a kayak in her crotch, but the female is supposed to be in junior-sized clothing.  Meaning she herself is an age fitting that apparel.  And the people already don’t like an idealized, unreachable body image put forth to shame women, but now it’s geared toward impressionable young girls.  The Bullseye missed the mark on that one (puns!). [Here’s a link to an actual news story about the whole thing.]

That brings us to our little world, and the sweet, innocent (or ignorant) nerds who occupy it, asking what all this fuss over canyon crotch has to do with us.  It is a double-edged sword, this here issue, putting nerds in the role of both victim and culprit.  We geeks, as accepting and tolerant as we are (a fairly natural disposition I will write on in the future), can also be the most critical.

The issue of body image is a very relevant one in the world of nerds, especially in comic books.  While the work of many popular artists is fantastic to look at, it doesn’t exactly represent the reality of a human being’s anatomy.  One argument in the favor of the artist and others involved in comics is that these characters are not normal human beings.  We have everything from an alien from the planet Krypton to mutants of all shapes and tail sizes.

This, however, leads to two problems.  The first is the very reason many nerds are so into escapist entertainment- our insecurities about ourselves.  While we feel as though our love handles can be used as floatation devices, and our asses are the best thing to land on in case of a fall, we are escaping to a world of ideal people and situations that can also have that affect on our psyche just as much as our peers.  Superman might stand for truth, justice and the American way, but he’s buff and we are sad and flabby (which is getting to be the REAL American way).

The second problem is that when these properties are adapted from comic books to other mediums, such as television or film, the fans of said characters are extremely critical.  Though, I do want to be very specific here, because it is a very fine line that ends up getting nerds into a kettle’s worth of hot water.

Complaints about casting of certain actors as certain characters are NOT a reflection of any nerd’s views on the demographic from which the actor comes.  It is instead a reflection of many fans’ strict adherence to source material.  However, this often gets confused as something it isn’t.

Two really big examples in the last six months have emerged that illustrate just that point.  The first, and one I had planned to touch on when I first started writing these, deals with Wonder Woman in the sequel to Man of Steel.  The very fact that the character has to join the ranks of a seemingly ever-growing cast of heroes aside, the casting of the Amazonian goddess is what I want to focus on.

It was announced that WW would be played by an actress named Gal Gadot.  She has done a few projects, but her most notable contribution to film is the Fast and Furious franchise.  I’ve seen all but one of those movies, and have seen Gadot’s photo in articles about her WW casting, but couldn’t for the life of me pick her out of a lineup.

Other nerds very well could, and have picked apart her casting in the Supes sequel since day one.  They have called her too skinny, short, and other things that are contrary to the normal vision in the collective conscious of what WW should look like.  All in all, the nerd community at large has treated this actress with the near vitriol they welcomed Affleck with when he was announced as Batman.

I found the whole thing funny, too, for superficial reasons.  As the stereotype of a nerd is an overweight, pimply-faced, antisocial reject who lives in his/her mother’s basement, I had to wonder what would give such a creature the gall to attack a woman based on her appearance.  My first inclination was that she was hot, and the representation of a female that some X-Box playing trolls could never bag or ever be.

But then I remembered the history of comic book movies, and how the smallest changes can incense a fan base.  Whether it’s leather uniforms for the X-Men or organic web shooters for Spidey (neither I minded), nerds hate change.  They even bitched when Laurence Fishburne was cast as Perry White in Man of Steel.  I though that was great, actually, as I’d already decided black actor Delroy Lindo would have been awesome in the same role.

Another recent casting that changed the racial identity of a character came in the form of Michael B Jordan as Johnny Storm, a.k.a. the Human Torch, in the Fantastic Four reboot coming from Fox.  Jordan got the gig from what I understand, because he was in the movie Chronicle by the same director as the FF reboot.

But of course nerds had to put their nerdy feet in their nerdy mouths and cry foul.  Thanks for getting us labeled racists, you a-holes.  However, this is also a case of mistaken ignorance.  If you read the comments on message boards and whatnot, you get the obvious morons who just hate black people, but you also get the real reason nerds don’t like the casting.

First, most nerds don’t like anyone cast in the movie so far.  Second, Sue Storm is white and she and Johnny are supposed to be siblings (leading some to believe adoption or a mixed family unit is in the cards- pointing to the greater issue of how much Fox is deviating from the source material).  Third, and the most given answer?  Survey says…he’s not black in the comic.

People with other publications have tried to reconcile the nerd sentiment with the rest of society, and have kind of failed.  They have pointed to the character of Nick Fury, who was traditionally white, but changed to a Samuel L Jackson-like black man when Marvel created the Ultimate universe in their books.  Jackson was later cast in the role when Fury appeared on screen in the first Iron Man, and people celebrated. 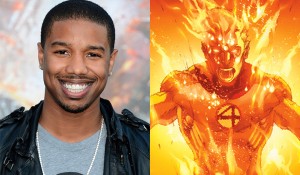 The attempt to justify the difference was that there was no Johnny Storm who had ever been black.  If he had been black in the Ultimate universe or the even newer, shinier NOW universe, nerds would be more accepting of Jordan’s casting.  To that I say nay.  Nay, I say.  The truth was, Nick Fury had turned into kind of a wuss and needed revamping.  And there ain’t no bigger badass as Sam Jackson.  Plus, people complained about the change in the comics, too, though not as much as these recent casting announcements.

This is a discussion that could go on and on, but frankly I’m getting tired.  Literally, my eyes are strained and I want to fall asleep.  So what I’m saying, if I’m saying anything at all, is can’t we all just get along?  Nerds need to let go of their preconceived notions of characters in the world of fantasy.  If WW is a truly Amazonian goddess, she wouldn’t need her strength to be derived from physical muscle alone (and would you really want someone like Chyna to play the part?).

And who cares if Johnny Storm is black?  He’ll be on fire half the time, anyway, and black or white won’t matter.  Fire is orange, dammit, no matter who’s on fire.  Comics have always been on the cutting edge of pushing the envelope of social tolerance (remember when Lois Lane was black for an issue?), and if Johnny and Sue are part of a mixed race or adoption friendly family in the new movie, great.

So let it go, nerds.  Then maybe we won’t have to worry about how a dumbass photo on a website makes somebody feel because they’ll have learned shit like that doesn’t matter.

It’s very funny to me how so many things can converge coincidentally during one span of time, so much so that they prompt me to change the subject matter of these little ditties I write.  This week is quite possibly the most serendipitous of all the instances thus far, and I couldn’t be more happy…

Next ArticleAnd Now Kiss: An Introduction to Shipping