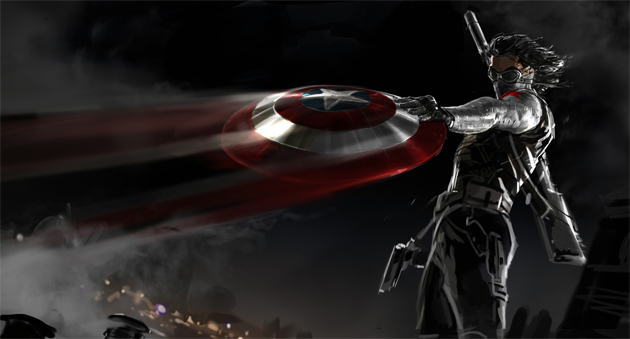 I wrote this earlier in the week, folks, before I knew I’d be seeing Captain America: The Winter Soldier a whole day early.  That’s right, I saw it Wednesday!  Na-Na-Na-Naboo-Boo!

Though, I left the following column alone as it was- a pre-viewing piece.  Happily, I can say with great certainty that just about everything to follow from my original bit is spot on, and the movie is a helluva flick.  But I hear there might be a podcast coming for that, so I’ll reserve my thoughts for later.

Watching Marvel’s Agents of S.H.I.E.L.D. this week, they had an extended scene from the new Marvel Studios’ flick Captain America: The Winter Soldier (I’d like to point out this is the first Marvel Studios sequel to not have a number behind it, just the subtitle. Don’t know if that means anything, just thought it was interesting). What good IS a TV show if you can’t promote other stuff?

During the commercial, they said, “See it Friday!” My response to the silly bastards was they know darn well most places have a Thursday night show, and most nerds and Marvel movie fans are going to go out then to see it if they can help it. I know I’m going Thursday night.  And then Friday. Then again on Saturday. And that’s if the movie sucks. Imagine how many times I’ll see it if it’s good?

By most accounts, it sounds as though it is a great movie, and an awesome, game-changing addition to the Marvel Cinematic Universe. Of course, many critics (as well as “regular” people- in social, movie-going status, not bowel situation) are calling this one of the best MCU flicks, and Marvel’s ‘The Dark Knight’.

Now, I’m trying to not get as giddy as a school girl hearing something like that, because hyperbole is usually pretty high when these movies come out. Though, it has to say something that this is the ninth (?) Marvel Studios movie, and that’s being said. Most franchises can’t boast that kind of critical acclaim. Winter Soldier has a lot going for it, though.

When it was announced that a Captain America movie would be a part of Phase One of the MCU, it was met with one question- will they change the title? Of all the questions asked about this movie from the very beginning, the one I remember most had nothing to do with characters, or plot, or how it fit into the scheme of things with the other Marvel movies. Sure, those issues were all there, but for many muggles talking about it, they were concerned with whether people in other countries would be turned off by a movie with a hero draped in red, white, and blue.

I suppose it wasn’t really a stretch. The United States had done a pretty good job of tarnishing our reputation as far as foreign policy was concerned. Not saying I agree or disagree, it’s right or wrong, or the tarnishing has been deserved. But the sectors of the globe that disliked us seemed to dislike us even more, and those that were indifferent seemed to view us out of the corner of their eyes a little more suspiciously. So when a movie featuring a character that looks like our flag comes tearing out of the gate, I suppose, for those people, it’s hard to not tread lightly. They’re probably wondering if there isn’t some condescending, preachy manifesto along with it.

But those people misunderstood the very nature of who and what Captain America is. I use ‘misunderstood’ because after people actually saw the movie, all the bullshit should have gone away. Of course there’s still hate for the movie simply because it says America in the title, but those aren’t the kind of people anyone is most likely wanting to be associated with. In the end, the ideals of the character, and the story told, are ones that every person can identify with, and can be lifted by.

First and foremost, the plot is a period piece. Director Joe Johnston (the awesome Rocketeer, and serviceable Jurassic Park 3), wanted to do an action movie set in the 1940’s, and make it as exciting and engaging as anything modern day. That put the story back to a place in time when good and evil were more easily defined, and America was a shining example, and a knight in shining armor to many.

Second, and possibly more important than the setting of the story, is the character of Captain America himself, Steve Rogers. Without good ol’ Steve, there is no Captain America. Steve is chosen because of who he is- his morals, his values, and everything good about him. That’s what makes who he becomes so wonderful, America is just the branding. He might be a young white guy, but he’s the underdog and everyone loves the underdog. Especially if they have a heart of gold.  He stands for what is right when the odds are stacked against him, and his does it despite any fear he might have.

Third, the movie sets up the whole idea of the MCU and the Avengers despite being the last solo flick before the big team-up. Super ultra mega producer Kevin Feige has said (and this is based largely on the comics) that in the chronological timeline of the MCU, much that follows the origin of Captain America is an attempt, and result of trying, to recreate him. The Hulk being the biggest example of this (pun, maybe- and, the entirety of the MCU is not necessarily beholden to this notion, btw).

It also looks as though The First Avenger has set The Winter Soldier up for some pretty big pay-offs. You get who Steve is, and what his ideals are. There’s the friendship that takes an odd turn when Cap faces down the titular character. Who could forget the Agents of S.H.I.E.L.D and how the events of this movie will most certainly impact the television show Agents of S.H.I.E.L.D. Quite possibly one of the biggest threads I’m looking forward to seeing continued is the story with ass-kicking agent Peggy Carter.

So this movie can be released unfettered by the question of will the rest of the world shy away, because they don’t care about the title, they care about the drama. There are things to find out, and continue, from the first flick. And we also have to see how it ties into all the other MCU flicks, past and future.

Not only does the movie look to have a lot of relevance to the MCU, but it also appears to have some relevance to our current political climate as well. The theme of The Winter Soldier seems to be all that was good is being perverted by the world we live in- Bucky turned into the character of the title, S.H.I.E.L.D. becoming more nanny state, and even Cap’s uniform becomes more militaristic and imperialist. I’m guessing from what I’ve seen in the trailers that Mr. Rogers does an about face, resulting in his use of the old uniform. I’m quite certain the wardrobe change is a physical representation of a character/story arc.

So what I’m saying, if I’m saying anything at all is I’m excited as much for The Winter Soldier as I was for The Avengers. Everything about it looks to be a giant step up, and step forward from the first one, and that’s saying a lot because I friggin’ loved that movie. This has that feel of being larger in scale, and smaller in terms of dealing with character. Never mind the flick is supposed to create interesting changes for Marvel’s solo TV show, and lead up to the next Avengers movie just as The First Avenger did (especially with a reported end credits sequence I won’t discuss here…but, well…ok, I won’t spoil it. Yes I will. No I won’t. AAAAAAHHHHHHHH!!!!!! Must.Not. Spoil.