Stop the mutha-luvin’ presses for a special freakin’ announcement!  I’ve pre-empted my next post about bashing a little on DC Comics (something I like to do) with sucking the expletive deleted of Marvel Studios (which is something else I really like to do).  On Tuesday, Oct 28 in the year of our Lord 2014, Marvel Studios announced their slate of flicks through 2019, giving me five years of orgasm in one half hour.  To commemorate, Pandora read my mind and is playing the Soundgarden song from The Avengers as I write this. Meant. To. Be.
Without further ado…Marvel Cinematic Universe: Phase Three (excluding Ant-Man in 2015, of course).

Captain America: Civil War (5/6/16)
Being a sequel, this is just going to follow the pattern of Marvel sequels.  If it looks HALF as good as The Winter Soldier, it’ll make huge bank.  If it IS as good as TWS, it’ll make phenomenal bank, and keep this train a chuggin.’  The fact that RDJ is reprising the role of Tony Stark in this is like a mini-Avengers, and on its own cements this as a hit.

Doctor Strange (11/4/16)
One of the longest rumored characters, and most oft-asked about is official.  And if Benedict Cumberbatch plays him as rumored, fans will see this a million times over.  Now that we’ve had the cosmic Marvel influence introduced with Guardians of the Galaxy, the Sorcerer Supreme will bring the magic and supernatural to a very sci-fi cinematic universe.

Guardians of the Galaxy 2 (5/5/17)
See what I said about Cap 3, except an even bigger hit.  The little movie that could (for the record, i knew it would be amazing from the start), will bring us one step closer to hopefully joining the Earthbound heroes and our favorite rag tag group of outer space antiheroes.  I am Groot!

Thor: Ragnarok (7/28/17)
The only real oddball to me.  It’s kind of a clunky title, and I am somewhat assuming they are still using standalone Thor films to further the larger MCU.  But the first two were enjoyable fun, so I’m definitely on board with it.  I do expect this to be his last flick, however. 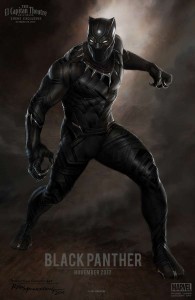 Black Panther (11/3/17)
Three Marvel movies in one year?? Heck yeah.  And we get the perfectly cast Chadwick Boseman (42) as the titular character of the famed Wakandan prince.  This is another one that people have been clamoring for, and it looks like Avengers: Age of Ultron is planting more than seeds with at least one location and character in that movie. Boseman even joined RDJ and Chris Evans on stage at the announcement, and we not only got a title card, we got some concept art, too. And, I’ll toot Marvel’s horn for them- a black hero headlining his own flick.  Nuff said.
Avengers: Infinity War (Part One) (5/2018)
You read that right.  PART ONE.  Joining the ranks of movies split into multiple parts, but surpassing the ones who have with people actually giving a shit, Marvel promises to pay off over half a decade of teasing Thanos and his devices in the background.  What will this hold for the MCU?  What characters will this bring together?  Where will the battlefield(s) for this war be?  We have a long while to speculate.

Captain Marvel (7/5/18)
That’s Carol Danvers’ Captain Marvel to you.  Again, horn tooting for Marvel- female superhero, star of her own movie, and the competition’s attempt looks pretty trite right about now.  Really, I have the least to say about this one so far.  Partly to do with the fact that as we get further out for release dates speculation becomes a little moot. From what head honcho Kevin Feige had to say, this is very much dealing with her earthly and cosmic origins.  The placement of this movie between the two installments of Infinity War makes me wonder if there is some greater meaning to it.  There are already folks bemoaning the fact that Black Widow doesn’t get her own movie, but you’re getting Captain friggin’ Marvel!

Inhumans (11/2/18)
Again, a cosmic movie.  But much larger than GotG was.  This will benefit in no small part to the unfettered success of Star-Lord and friends as they continue to bulldoze the box office even now.  I’m not all too familiar with the Inhumans storyline, but it certainly does jive with what seems to be going on with not only the MCU, but TV’s Agents of SHIELD as well.  The release of this movie the same year as Captain Marvel, and preceding Infinity War Part Two can’t be coincidental.
Avengers: Infinity War (Part Two) (5/2019)
I’m just going to go ahead and guess the shit to end all shit for Marvel movies.
There you have it.  A month after DC Comics and Warner Bros bored me to death with a slate of movies that should have been released years ago, Marvel has me looking forward to the next 5 years at the movie theater.  I would never have thought watching Iron Man in 2008 that I would have a library of films like these cataloging such a varied and interesting group of characters that aren’t just up on the big screen, but sharing the same universe.  This is comic books come alive, and only the most cynical person, long dead inside, could have anything bad to say about this.  Especially given Marvel’s track record of producing films of the caliber and fun that they have, it would take a Galactus-sized folly for this to fail.

I Am Groot (And So Can You)

It’s easy for me to review this movie without talking about any of the plot, which is good because I wasn’t really thinking about writing a review until it was broadcast via the Facebook. I was actually just going to write something fawning all over Marvel and this crazy idea for a movie, and how…