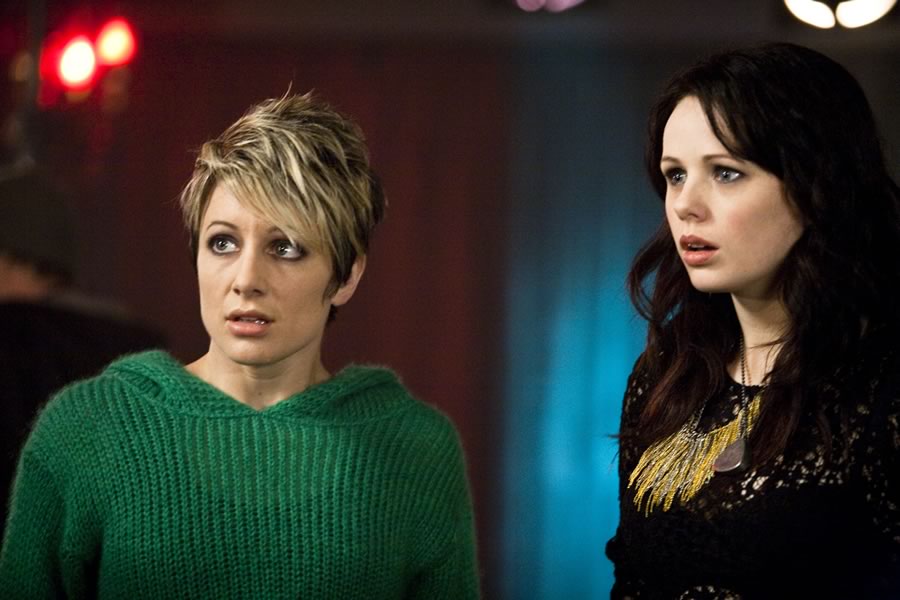 The Johnsons brothers aka the Norse gods in human form are searching for Frigg so they can get their full powers back. Last time some stuff happened. Axl, Olaf, and Anders finally saw the goddesses face to face. They met Thor. He’s a big drunk dummy and bad dad. Ty, who I just realized might be part vampire, is dating Anders’ assistant, Dawn. Mike didn’t have much to do thank goodness. The Goddesses were finally relevant. Anders got punched in the face, it was pretty sweet. A quick reminder of who’s who; Axl is Odin (the super mega awesome god), Anders is Bragi (god of poetry), Olaf is Baldr (god of light and purity), Mike is Ullr (god of games and skiing), Ty is Hoor (god of winter), Michele is Sjofn (goddess of love), Ingrid is Snotra (goddess of wisdom), Stacey is Fulla (Frigg’s handmaiden) and that other dude is Thor.

Episode 7 aka “Bad Things Happen,” starts where the last left off. Axl and Mike are building a house. Axl is interning there and not making money thus furthering the mystery of who pays for his rent. Some dude steals Mike’s truck but who cares Mike is boring. Axl and Zeb are hanging out later then Gaia shows up with a handsome man. It’s her boyfriend, Jacob the Jeweler. Apparently they hooked up the weekend when Axl was busy with Thor’s daughter. Gaia and Jacob go spend a lover’s weekend together. Axl and Zeb decide to drink their feelings away for the weekend instead of find jobs to pay their rent.

Axl can’t get drunk so they break into Anders apartment. Axl uses his powers to rip off the front door. Zeb is suspicious. Mike and Valerie got in a fight over money stuff. He goes to a bar and gives in finally does something interesting, uses his powers to win money. His god power is winning at games. He plays darts a little too well. Seeing people play darts is extremely boring. They did a five minute montage of not exhilarating darts.

Axl and Zeb hang out and keep drinking at Anders place. Axl still can’t get drunk enough to forget about Gaia. Suddenly three very attractive ladies stop by. They’re looking for Anders. They noticed the door was broken and saw that as an invitation, the classic sign. Zeb tries to hook up. Axl is too sad. They party for a bit. One of them pulls out a white powder. It’s “like coke” apparently. Axl and Zeb without question snort lines. Mike moved from a bar to a casino and wins a bunch of money. He gets questioned for cheating and ends up getting the cute redhead blackjack dealer fired. They hang out for the rest of night. She wants to know his secret.

The blackjack dealer challenges him to numerous arcade games and he always wins, in another boring montage. Valerie calls he ignores it. The cute redhead dealer invites him back to her place he honorably declines. Back at Anders’ place, Zeb is partied out. Anders shows up, they party. The ladies reveal their plans. They were wronged by Anders and will neuter him. Anders snorted the “coke” which was horse tranquilizer; Anders is out. Axl is still sober and handcuffed to a chair. He breaks free and saves Anders. He declares that Anders will be celibate since he’s Odin. Zeb learns Axl’s secret. Mike learns that Rob woke up from his coma, the end.

Episode 8 aka “I Can Give You Frigg,” the goddesses are having a meeting. Ingrid is late, she had a surf lesson date with Olaf. They debate on what to do about this stupid scam thing that Anders started to find Frigg, it’s not worth getting into. Basically it will expose who is of Norse blood thus finding Frigg. Olaf, Anders, and Axl are hanging out, Anders shows off his plan. I have a feeling Frigg will be important to this episode. Mike is stressed about the Rob thing. After the coma, he married Rob’s fiancée, Valerie. Anders has a plan to make money off of Rob waking up. It’s vaguely defined. Basically Valerie and Rob will be hanging out a lot and maybe rekindle their romance.

Rob and Mike hang out at the bar where the coma happened. Rob is adjusting to new technology. They talk about boring Mike stuff. The goddess Stacey visits a butcher’s shop and is mystified by the clerk. It’s Frigg. Her name’s Eva, a goth singer-songwriter/butcher. Rob moves into Mike’s home so now Olaf needs to find a new home. He goes to Anders. Michele and Stacey go see Eva perform and she’s a special lady. She might be Frigg. They keep Eva a secret.

These episodes were boring. I don’t have a strong opinion one way or the other. Mainly it’s because too much Mike. I don’t want to see his boring life anymore. I want to see Ty and Dawn’s romance grow and develop into true love. That being said, Ty and Dawn only show up once during these two. The goddesses are finally relevant to the story but too little too late the fun vacuum aka Mike is right there. I can’t put into words just how boring Mike is. I understand he’s the responsible one aka Dan McCoy aka Cyclops but at least make him interesting. I don’t care about his marriage problems. Valerie is just as boring as he is. I want her to cheat with Rob then at least something happen. The mystery of how Zeb and Axl pay for anything continues. I want answers, Who Pays Their Rent!? There still is no mention of a job or anything from them. I’m now realizing I want the show to be The Notebook or an Amanda Seyfried rom-com but replace Ryan Gosling with the Norse Winter god vampire named Ty and Rachel McAdams with the adorable and interesting Dawn. They’re the best part of the show easily. However, I can honestly say that I like this show. I never thought I would, anything is possible. It’s not great but it moves at a good pace and is interesting enough to keep my attention. I now have two episodes left of Season 1.

Next up the conclusion of season 1, “Hunting Reindeer on Slippery Rocks,” and “Every Good Quest Has a Sacrifice.”

Hello and welcome, this is This Seams Interesting. It’s a monthly column looking at weird, interesting, and overlooked people and events throughout history. October’s topic is…   MONGOLIA UNDER BOGD KHAN: Two Revolutions for the Price of One   When it comes to the Mongolian history, most people stop at the death of Genghis Khan…

This Seams Interesting: The Walker Brothers

Hello, I’m Spencer Seams and you’re reading This Seams Interesting. It’s a monthly column looking at weird, interesting, and overlooked people and events throughout history. July’s topic is…   THE WALKER BROTHERS: 60 Years Before Jackie Robinson There Were The Walkers   Moses Fleetwood Walker (nicknamed Fleet) and Welday Wilburforce Walker are two of the…

Next ArticleEpisode 42 - The Strain!