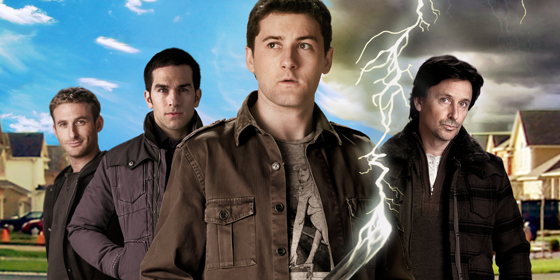 Syfy channel is famous for a few things; original films, the Battlestar Galacica reboot, and reruns of other shows. Recently it started airing the New Zealand show, the Almighty Johnsons. I know I’m a little late on this, they started airing it in July. So I will cover two episodes at a time. Five seconds into seeing a promo I knew I had to watch this show. Some of you reading this are familiar with the series for those of you that weren’t, it’s a dramedy series where the Norse gods are driven out of Scandinavia, go into human form, and restart their lives in New Zealand. Over the years they reincarnate every so often but at the cost of not having complete control of their powers. In order to get their full powers Odin has to meet his soul mate Frigg.

The show opens with Axl Johnson, played by Emmett Skiliton, going to a liquor store for party supplies. It’s his 21st birthday party that night. There’s a mysterious lady wielding a knife parallel parked scoping out our birthday boy. He crosses the street. The lady tries to runs over him. She apologizes. They go to the party. Axl gets some one on one time with her jumping on the trampoline, you know that classic move. They hook up on a trampoline the best place for hooking up. She pulls out that knife. An earthquake conveniently hits at very moment. She loses the knife. Party’s over and everyone leaves including that mystery girl. He hangs with his roommate, Shakira, rest of the night. The mystery lady in league with Norse goddesses that are after Axl for unknown reasons.

Now, we’re introduced to Axl’s brothers. There is Ty Johnson aka Hoor, played by Jared Turner, the god of winter. He has a refrigerator repair business. Anders Johnson aka Bragi, played by Dean O’Gorman, he’s the god of poetry and the ladies’ man. Mike Johnson aka Ullr, played by Tim Balme, he’s god of the hunt and games. He’s the boring one like Cyclops in X-Men. Olaf Johnson aka Odin, played by Ben Barrington, he’s allfather of the gods and the family oracle. He’s Axl’s cousin. Individually they see crazy weird things happening around New Zealand including a sea of blood, a bizarre symbol in a field, earthquake, and others. This can’t possibly mean anything. Olaf warns them that there is one weird sign left then they need to worry about, Odin with two hearts. That probably won’t happen. They are planning something special for Axl’s 21st but what could it be?

They pick up Axl and take him to the woods. At this point it’s revealed they’re Norse gods in human flesh bags. They have to hide their powers from the public. Axl is freaked out and then learns Olaf isn’t his cousin but his grandfather, wait…what!? He is given a magic sword and told to strip naked, hold the sword high, and go into a magic circle. He does. Lightning from the sky zaps the sword with a mighty blast knocking everyone to the ground. Olaf is out cold. Our birthday boy suddenly feels like a god and doesn’t seem to care about his grandfather cousin. They rush Olaf to Mike’s house. He’s mumbling crazy stuff. Axl is Odin now. So who is Olaf?

A second 21st birthday party is going on. Olaf is out. Axl gets drunk and crazy. He meets a pretty lady, a secret goddess, who challenges him to catch her. He accepts the task. She runs into the night. He follows. The rest of the Johnsons don’t know where Axl. Olaf is awake, and dancing like Johnny Travolta in his prime. The goddess, shoots Axl with an arrow with a special heart shaped arrowhead. He catches the first one but she fires again. She hits in between his ribs, a second heart. The gods and goddesses are very upset by this. This is the one thing no one wanted. Axl now has to find his soul mate Frigg, if not then he and his family will die. End of Ep.1 “It’s Kind of a Birthday Present.”

Axl is out of the hospital and hanging out with his bro, Anders. Since he’s the one that gets laid a lot sex comes up. He has to sleep his way through New Zealand to find Frigg. Axl is still a virgin. Anders proceeds to shame and insult him but promises to get him with the head cheerleader of the basketball team he’s part owner of. Basically, he becomes his brother’s pimp. It’s gets a little/lot sexist here and that’s just the beginning. Mike and his human wife, Valerie, are having problems with having a baby. Do you get the theme of this one? Meanwhile during all this, Axl is casually seeing Shakira’s friend Jaime. Shakira really likes Axl and versa vice but no one has made a movie. Anders keeps shaming him for being a virgin. Shakira is jealous about the Jaime thing but is nice about it and stays out of it.

Mike visits the hospital. His buddy Rob, who’s been in coma, is talking. He’s mumbling things like Olaf. It’s all Mike’s fault for the coma. Later that day Axl shows up in the locker room at the Basketball stadium. In order to impress this blond bombshell he has to be the mascot. He reluctantly accepts, he gave up a date with Jaime for this. The other mascot is there. He’s a rabbit. The game starts and the bunny man asserts his dominance. Cut to the end of the game and the mascots are locked in combat. Everyone sees it. The fight is broken up. Anders uses his powers of poetry to woo the cheerleader and convinces her be into Axl. They go to Anders’ bachelor pad. Anders hangs in the family room while his brother has sex for the first time in his bedroom. It gets weirder. She falls asleep at some point and he finishes. He freaks out. It’s gross and uncomfortable. Yep, the climax is a date rape joke. He runs completely naked into the family room where the rest of Johnsons are angrily berating Anders for abusing his powers. The brothers leave. Mike warns Axl about using his powers. Jaime doesn’t like Axl anymore because of the pimp situation, so Anders ruined that for him. Also Rob psychically talks to Mike. End of Ep. 2, “This is Where Duty Starts.”

The tone of the show was not as goofy as I was expecting but it’s only the first two. In general the show is has weird tonal issues i.e. it switches from goofy to serious not that successfully. It feels unintentionally jarring. When the tone switches it gets kinda dull. Emmett Skiliton is a little grading at times but overall good as a kid who just got superpowers with the fate of his family on him. It’s enjoyable. The goddesses are barely in it. I get it, it’s setup for later but they add a nice balance to the overt bro-ness of everything else. The performances are good. A few people are irritating but they aren’t seen very much yet. Next up Ep. 3, “God’s Gift to Zebras” and Ep.4, “You Gotta Love Life, Baby.”

Next ArticleZebras and Apple Martinis