I hate to be dipping back into the Ron Zimmerman well so soon after my last foray, but it’s a fertile source of hackery. As I’ve said in a previous column, Zimmerman had a burst of work at Marvel for a year or two and then essentially faded away. His heavy hitter projects include Rawhide Kid, Ultimate Adventures and Get Kraven. But he also received some other work, such as a fill-in for the Marvel Knights volume of the Punisher. Now, I’m a Punisher fan, Garth Ennis’ interpretation especially. I remember picking up this month to month and being dispirited that smack dab in the middle of a Ennis/Steve Dillon run was something by this fucking dude. Given Punisher is a right-wing fantasia even on his best days, it’s pretty easy to make a lousy comic starring Frank Castle. But Zimmerman goes above and beyond.

It’s impossible to overestimate how stupid this all is. As many Punisher comics do, this one begins with Castle mowing down a group of Italian stereotypes. They’re clearly modeled after The Sopranos; there’s a Tony and a Paulie for fuck’s sake. The Tony says something that sticks with Frank: “Capone himself would’a gave this the green light [referring to a proposed gang war with expected collateral damage]”. Al Capone, he thinks. Al Capone is the Adam of organized crime! Rather than let that fairly trite observation lie, he goes to his buddy Nick Fury and the next thing you know the fucking Punisher is in the Baxter Building, getting ready to travel back in time to 1920s Chicago so he can assassinate Al fucking Capone. What?! 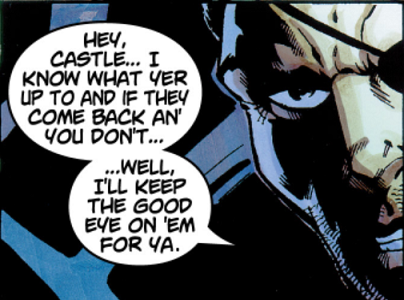 “I’ll be the Paul Rudd to your Judd Apatow, Frank.”

For reasons that will become apparent at the end of the comic, Fury’s and Reed’s motivations are irrelevant but still worth exploring within the context they’re presented. Fury goes along with it because Castle asks for a favor, “and by doing it I’ll do you one. A big one”. Note: Fury doesn’t fight organized crime, he fights superspy organizations like Hydra, unless they too can be traced back to Capone’s malign influence. Reed’s involvement doesn’t even receive an explanation. It’s dark and edgy and cool to make Mr. Fantastic ethically and morally compromised, but this still doesn’t make any sense. Why would he blithely let a mass murderer muck about in the timestream? You have to assume everyone’s on a daily supply of stupid pills. The way this comic goes Zimmerman may as well have had Punisher drink from a carton of time juice like in that episode of Get A Life.

Castle arrives in 1929, as evidenced by the newspaper headline “STOCK CRASHED!!” and Louie Armstrong music omnipresent in the background. He hails a cab to Cicero where he plans on getting close to Capone by working for him. His resume consists of beating up a who’s who of Capone cronies in front of the big man and, for good measure, tossing a mook’s arm on the table. Admittedly, chopping off a guy’s arm and using it as evidence of your prowess is pretty cool. Capone tasks Frank with killing Hymie Weiss and Bugs Moran, two real historical figures. He does so with ease; a lot of the comic is wordless panels of Punisher mowing down people. Someone describes Frank using a “jujitsu chop”; was that common vocabulary in 1929? I don’t think so, but that’s neither the first nor the last anachronism in the comic. Capone invites Frank and all his other underlings to a dinner which he uses as cover to gather all the skimmers and cheaters in the organization in one place. 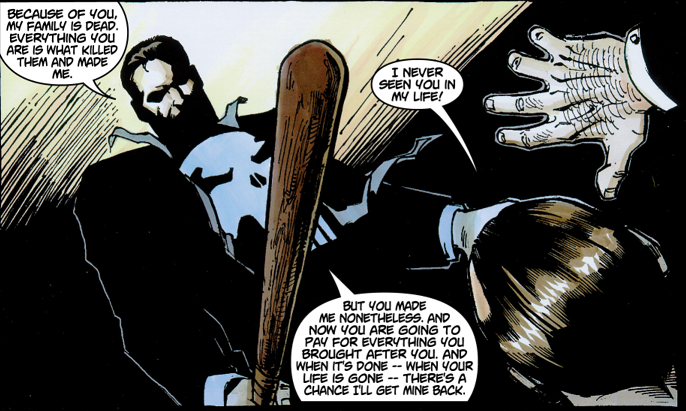 “Trust me, if I kill you now, Tom Hardy won’t star in a movie about your syphilis years!”

Naturally, Frank escapes his restraints and rips open his suit to reveal his skull chest emblem. Zimmerman tries to deepen the relationship between the two characters but it’s still ham-fisted and ridiculous. “Because of you, my family is dead. Everything you are is what killed them and made me.” No one more than the Punisher knows that crime has no root and that his war will never end, so him thinking that wiping out ONE mob boss in the late 1920s will suddenly prevent the prominence of organized crime in subsequent decades is moronic. A fight ensues, Castle tries to trigger the time machine but isn’t able to quantum leap into the time hole, Capone’s boys end up shooting the both of them. Both bleeding out, Frank takes a razor and finishes the job. “I did it, honey” he says with his last breath. But if he prevents all mafia executions and saves his family, he renders null his reason for going back in time in the first pla–no, I’m not going that road. I’m not watching Primer again, and not just because the director turned out to be a shitbag abuser!

Here’s the kicker: none of it happened. The final page shows Frank’s alarm clock buzzing, him ruminating that for once he got a peaceful night of sleep. Okay, so already the story is terrible, but making it a fucking dream is the cherry on top. Why even publish it? As an exercise it provides no entertainment or insight and making it a dream is one final “screw you” to the reader. I didn’t expect Castle to kill Al Capone and that being the status quo of the Marvel Universe, but “it was all a dream” is a cop-out that is rarely, if ever, satisfying. It adds no insight to the character. Wow, the Punisher dreams of killing? No shit. It’d be surprising if he didn’t dream murder and instead was, like, a struggling sous chef or something. The comic would still suck because it’s written by Ron Zimmerman, but at least it would be a change of pace.

Now, you’ll remember from my dissection of his Spider-Man meets Jay Leno “comic” that the telltale sign of a Zimmerman is idiotic and obtrusive pop culture references. You might think to yourself “but this comic takes place in Depression-era Chicago, that ought to preclude his usual shenanigans”. Well, you’re wrong. There’s plenty of namedropping, not just the Sopranos “homages” I brought up earlier. Frank takes a cab to Cicero and the cabbie talks about how hot Joan Crawford and Billie Holiday are. Then the guy talks about women getting the right to vote as though it’s suddenly happened as opposed to something that occurred a decade ago. Much of this makes sense only if you accept Ron Zimmerman’s research consisted of falling asleep during The Untouchables. The whopper comes before the time travel dream when the following exchange occurs between Nick Fury and Reed Richards.

Marvel of this era was obsessed with Smallville. To wit: the head of the company once published a half-assed parody of it titled Marville. (Stay tuned for a column on THAT.) I’m surprised Zimmerman didn’t sneak in a dig at “AOL Comics”, a moniker for DC now rendered ironic considering Marvel’s current ownership. …Also, just let it marinate that the smartest man in the Marvel Universe watched Smallville. I would pay cash money for Reed Richards’ reviews of the Amy Adam fat vampire episode or the one where the dad from Wonder Years is a firepowered coach.

Another failure with the comic is the inability to make Al Capone stand out as a character. Seeing as how creating an indelible portrait of the mobster would require “research” and “thought” and shit, it’s no surprise he comes off as a generic organized crime figure, no different than any other the Punisher mows down in his monthly jaunts. Capone also lacks in presence and menace. A better writer might make that the point of the issue, demythologizing Al Capone and showing him to be just another thug, but Zimmerman’s obviously not that. So what the fuck is the point? Give opportunity for the artist to draw the Punisher with a tommy gun, I suppose. Even then the results are less than stellar, a few nondescript pages in a montage at best.

The saving grace, if there is one to this mess, is that the art isn’t bad. Mike Lilly on pencils and Rodney Ramos on inks do an adequate job illustrating something that never should’ve been illustrated. The issue often uses shadow to obscure part or all of the Punisher’s face; the result is he looks otherworldly, almost demonic. It’s a nice touch when it occurs. There’s one panel that’s a Nighthawks homage for some reason. Make no mistake, the artwork isn’t excellent; it’s about what you can expect from a journeyman artist tasked with a dumbass assignment. I just want to emphasize the problems are on the scripting level. 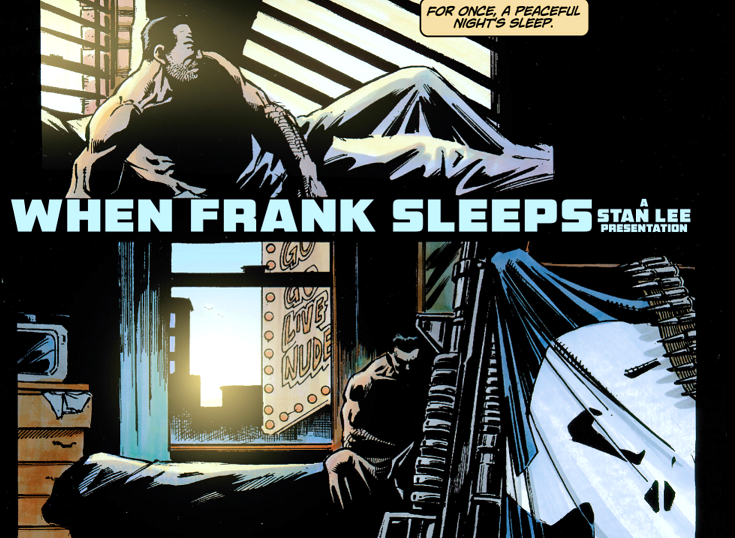 Do Franks Dream Of Slaughtered Sheep?

In the 15 some years since its publication Punisher #8 has rightly fallen into obscurity. Yet in all their infinite wisdom, Marvel recently collected this issue along with likewise forgettable fill-in arc “Taxi Wars” because I guess everything needs to be reprinted eventually. This is how a new generation of aging fanboys will get to read this shit, unfortunately. I’m a Punisher superfan and despite that I won’t put this collection in mine. (Other exclusions include Nathan Edmondson’s racist as shit run–yes, racist even by Punisher standards.) Punisher #8 isn’t worth it even for trainwreck value. Yes, it sucks, but it does so in a “why did anyone see fit to publish this?” way, not a “you gotta fucking see it to believe it” way. I’ll be charitable in saying the premise isn’t irredeemable as long as one took a gonzo approach to it. Inglorious Basterds would be a good example. Zimmerman doesn’t and the result is stupid dreck.

Next ArticleMore Like Heroes in CrisiSUCKS: A Review by Ronnie Gardocki and Chris Ludovici, AIA