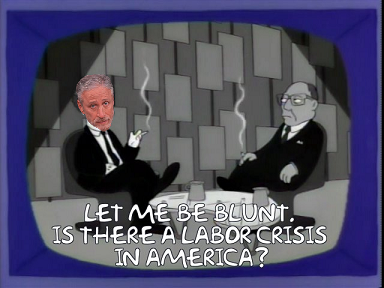 The Problem With Jon Stewart by Ronnie Gardocki and Dr. Daniel Daughhetee

The Problem with Jon Stewart invites a lot of easy jokes. “The Problem with Jon Stewart has a lot of problems”, “The Problem with Jon Stewart is Jon Stewart”, etc. Yet those tepid barely jokes you’ll see in the headlines of The Guardian are still funnier than anything in this show. Has anyone fallen from esteem (for non-sex reasons) so forcefully as Jon Stewart? When he left The Daily Show he was the elder statesman of political comedy and he correctly stayed out of the content mill muck that was the Trump era. Now, though, with his film Irresistible and his new Apple program it’s evident that the emperor has no clothes and has been nude for a while now. It’s become such a glaring issue that I fear looking back at the content of his I enjoyed and finding out it always sucked. (Call it “The Bendis Daredevil Dilemma”.) Whereas I think it’s evident Colbert sold out for money and for comfort, Stewart is a tougher nut to crack. Did he simply fail to evolve with the times? Do we no longer need his brand of infotainment? This is what this article seeks to answer.

If The Daily Show with Jon Stewart was a cheeky take on the (now retro) half-hour newscast format, The Problem is Stewart’s take on the newscast’s equally irrelevant but slightly more prestigious sibling, the news magazine. As handily demonstrated by the title of the most famous program in this format, 60 Minutes, the news magazine program is an hour-long broadcast, about 45 minutes of show material compared to the zippier 22 minutes of a half-hour show. One thing I can praise The Problem for is answering the question “Can a Daily Show style of presentation be sustained for twice as long” with a conclusive “NO.” 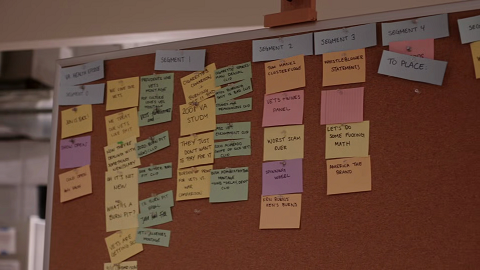 So many note cards, none of them jokes.

The jokes come few and far between, typically only as an obvious scoffing one-liner at some news clip or perhaps a too-self-deprecating joke at Stewart’s own expense. The classic Stewart self-deprecation worked decently well as a meta-joke during his Daily Show heyday, when a jibe about a joke falling flat or his personal appearance was made with the understanding that he had the energy and charisma to dig himself out of the hole in the next minute. During The Problem, Stewart’s wise-cracks about his evident aging or attempt to wring some life out of a weak joke instead just felt like invitations to pity him. These are not the humanizing asides of a beloved hot shot but the sighs of someone who seems just as mystified as we are that he’s on a TV show.

In addition to the war time rations rate of jokes being doled out, The Problem’s issues with pacing are further exacerbated by the decision to focus each episode’s entire runtime on one topic. Presumably the idea is that this allows for an in depth exploration of a topic. In practice, it meant hearing the same iniquities and miscarriages of justice again and again, albeit within the context of segments differentiated by format rather than topic. The show opens with Stewart introducing the topic of toxic military burn pits in occupied Iraq and Afghanistan and their health effects on service members. This is followed by a full two minutes of old TV news clips regarding the topic with an occasional reaction mug from Stewart, and another few minutes of monologue. This is followed by a ten minute live panel discussion segment with former service members affected by the toxic dumps who have formed an advocacy group to lobby the VA to treat their conditions. After the break we are treated to another monologue introducing the ways in which the VA has ignored, downplayed, or denied these conditions with Stewart ably trapping them in the most effective snare ever devised: proving their hypocrisy with TV clips! After THIS segment we are treated to a truly interminable interview with a VA official which was clearly intended to be Stewart pulling a “gotcha” moment of activist journalism, but which was ultimately two gray haired men talking in circles for what felt like hours. By the end I was ready to huff the fumes from a burning pit of military waste just to end it all.

This choice is among the most baffling, and perhaps in later episodes it will be modified so that a single episode can explore some other RELATED topics at least, but even at its stodgiest the hour long news magazine has four or five separate features plus a cranky old guy complaining about how bread has riboflavin in it now. Devoting the entire run time to one topic, no matter how worthy a cause, destroys even the potential for 45 minutes worth of decent jokes for your infotainment because there are only so many jokes to be made. Perhaps this explains the seemingly inexplicable lag between jokes in the program: if you have material that yields say 20 jokes, you’re necessarily looking at an average of one joke per minute. Grim. 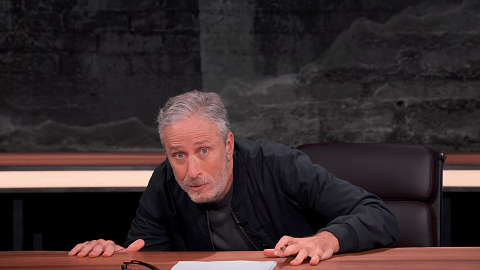 There are elements of The Problem that seem like conscious course correction from The Daily Show, like the way in which Jon lets you know his writers room is no longer a coterie of Jews from Harvard. Why, I spent a great deal of time investigating based on the footage and I could not confirm any Harvard Jews were involved at all, which seems like it ought to be a violation of the Comedy Code. The episode opens with a view at a producers meeting, and several collaborators are named and given titles, and none of them are white men. Now, don’t get me wrong. Diversity is great. Writers rooms should be more diverse so as to be able to cover more comedic ground by tapping into a variety of perspectives. But if you don’t think Stewart included this in The Problem to highlight he’s moved on from the days of Wyatt Cenac being the only POC in the room then you’re stunningly naive. It feels pandering, the way the camera cuts from black woman with dreadlocks to white woman to a Middle Eastern guy. It’s very BK Kids Club; all that’s missing is somebody in a wheelchair and Kid Vid.

The other common complaint lodged at The Daily Show was how often Stewart hid behind “I’m just a comedian”; this too has been course corrected because no one will confuse this show as the work of a comedian. This shift from even the pretense of being funny to full on advocacy may make sense as part of Stewart’s career evolution, but as 2021 entertainment it’s an absurd notion in that he’s not a journalist. This isn’t journalism. At best it’s infotainment, with emphasis on the ‘info’ with a paucity of ‘tainment’. It’s been approximately 6 years since we became deluged in Daily Show offspring flotsam and I question the efficacy of the format. Does it lead to change or does it create complacency by confining one’s outrage to an hour a week? Do I want partisans decked out in John Oliver iconography roughing up 1%ers into putting their money in the nation’s till, does that signify moving the needle for these shows? Perhaps. It certainly would diminish the sense that I’m being lectured at by a rich white guy who can’t even be bothered to wear a suit anymore. 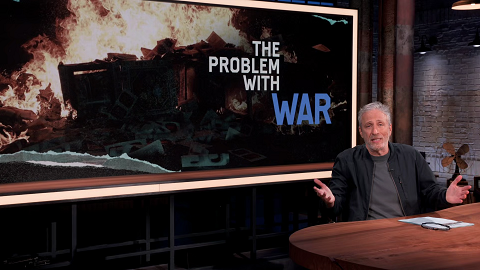 I like how “The Problem with War” boils down to “our service members are getting sick from burn pits”. Really? That is the problem with war?

Oh, and can we talk about how this is a complete lift of Problem Areas with Wyatt Cenac, right down to the name? Motherfucking Stewart was so pissed off at Cenac for voicing concerns about that Michael Steele puppet bit he went up and purloined the guy’s TV show and did it for a more exclusive platform. I’m only being half-serious; it’s possible that Jon Stewart came up with the same tired premise as one of his underlings for this reason: there are too many of these fucking infotainment shows. Despite attempts to differentiate them they’re all basically the same, and the woke corporate strategy is to give you color and gender options for your infotainment. Want a woman, there’s Samantha Bee. Want a foreign perspective, John Oliver or Trevor Noah. A black voice? Larry Wilmore. Oh, wait, uh. Look, they haven’t worked out all the kinks with this strategy, but don’t worry, they’ll iron them out. Point is that there’s about fifteen shows that pivot on the premise of “the news but funny” and they’re all either low hanging dreck (SNL’s Weekend Update) or laugh free lecturing that doubles as the audience’s One Hour Hate. 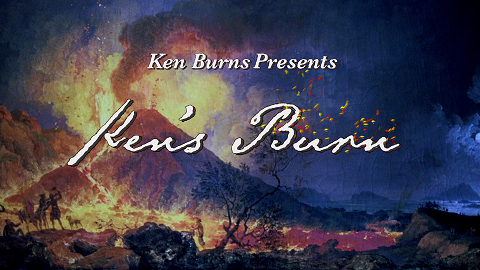 Although considering The Problem’s comedy consists mostly of hiring Ken Burns on Cameo, maybe it should stick to sober minded journalish-ism.

There’s no reason to watch this. It does nothing to distinguish itself from a crowded field of inheritors to the throne. We’ve been under the assumption that when Jon came back from the wilderness of “not having a TV show to vent his spleen four days a week” he’d have something important to say. I distinctly recall in the ramp up to Irresistible the more gullible among us believed he’d be the savior to deliver us from tired, repetitive anti-Trump humor. Instead we got whatever the hell that movie was. There’s I think the belief and demand that creatives stay vital for their whole careers, but in all likelihood people only have so much lead in the pencil. Creating hit after hit after hit is unsustainable, so why should Stewart be any different? He brought us the good version of The Daily Show and nothing can ever change that. Maybe he’s spent. But because of people’s immediacy bias, inevitably when discussion of him mounts people will bring up his shitty recent output as a corrective to his golden age. That’s a touch unfair because I believe like everyone and everything on Apple TV, The Problem will be swiftly forgotten, left in a shallow grave.

If anything, we should pity Jon Stewart the famous millionaire, because he’s doing the equivalent of going to the bar and musing “man, I used to BE somebody” while taking home suds soaked former high school cheerleaders who ask during foreplay for him to do Italian tough guy voice. Look in his eyes. You won’t see anything there.