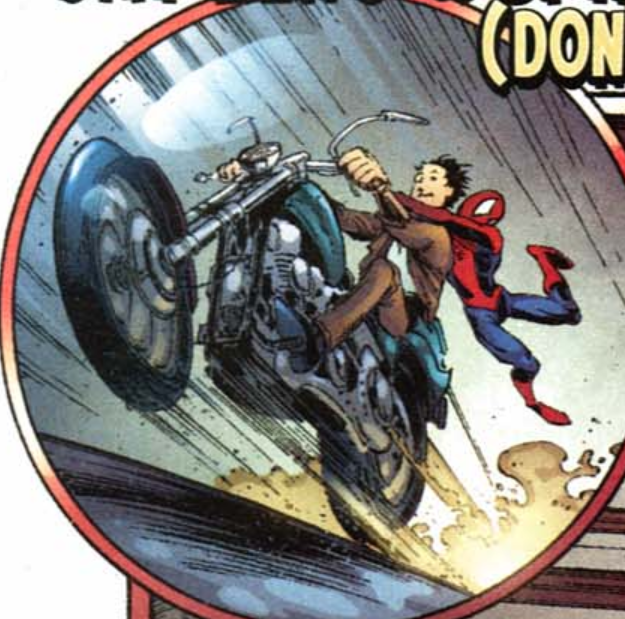 Like all good Americans, I have an unhealthy fascination (obsession, perhaps) with former Tonight Show host and all-around funnyman James Douglas Muir “Jay” Leno. He stands for everything I don’t: denim, classic cars, Cool Ranch Doritos, being Italian. How exactly did he become a mainstay of American popular culture for decades despite not being funny or endearing? At least Jimmy Fallon is easily explained; people love dogs. I decided to investigate this query in the way I know best: through reading bad comics. Indeed, there is a Spider-Man/Jay Leno team-up and it’s just as beautiful and as hideous as you might expect. I should clarify: Jay Leno gets top billing on this shit. It’s Jay Leno & Spider-Man, not the other way around. That’s the first of many crimes the comic, a blowjob to Leno so big and committed you’d think it was a commercial Jay himself starred in, commits.

Before we get into this shitshow, I want to try to explain Ron Zimmerman’s meteoric rise and fall. A writer for The Howard Stern Show, it seems Zimmerman received multiple comics writing jobs off the back of being then-Editor in Chief Joe Quesada’s buddy. Nepotism and patronage is nothing new in the comics industry, but this is a particularly galling example of it because Zimmerman is a witless hack. Far be it for me to impugn the tight scripting required for Howard Stern mentioning his tiny penis or Artie Lange describing his latest failed attempt at sobriety, but the overlap between that skill set and writing costumed adventurer stories for an aging fanbase of bitter pricks is infinitesimal. I know reading bad Wolverine comics suggests anyone can write these things, but that’s just not true, as Spider-Man/Jay Leno: You Hear About This, You See This, Spider-Man’s Got More Dead Girlfriends Than Monica Has Stains On Her Dress aptly demonstrates.

Here we are. Peter Parker is explaining to Aunt May he won’t be “home” for dinner, establishing this version of Peter is a loser who still lives with his fossil of an aunt, when his boss J. Jonah Jameson unloads an unusual request on him: ensure Spider-Man makes an appearance at a General Motors commercial shoot Jay Leno is doing, because apparently the funnyman has requested the wallcrawler do the commercial with him. Jameson doesn’t want “Leno using me or my paper for his monologue jokes from now til Christmas!” Yep, that’s the prime target of Leno’s LA-based program: New York media personalities. This made me imagine that Trump would absolutely hate Jonah. “Jameson’s failing Daily Bugle is a joke. The Scorpion is a LOSER. Can’t beat Spider-Man!!” 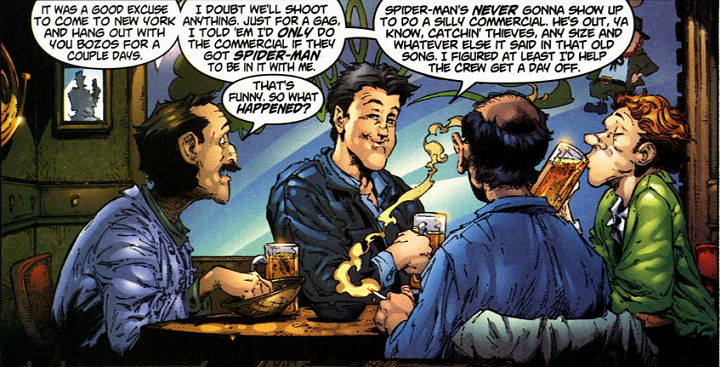 In the most inauthentic scene in history, because it posits Leno has friends he has beers with, Jay explains he demanded Spider-Man so the crew could get a day off. More than likely the crew will have to “waste the entire day” waiting for someone who isn’t going to show up to show up, but what do I know. Meanwhile, Spider-Man busts up a mugging and discusses how NYPD Blue just isn’t the same without Jimmy Smits. “It’s not that the show is bad, I just loved that big lug.” “On the other hand,” he tells the crooks, “you guys should try to become fans of Oz. I think you’ll find it more relatable viewing.” Just be glad there’s not a prison rape joke. See, this scene is Ron Zimmerman’s bread and butter, the kind of material one only can generate if they’re a Hollywood insider like he is. Dammit, NYPD Blue is a TV show! Jimmy Smits did star on it! Since comics is filled with people so out of touch and deluded that they think kids still read this shit, these facile references to then-popular entertainment was considered a breath of fresh air, an interesting novelty. Well, until the lumbering giant that is fandom mobilized and drove him out of the industry at least. 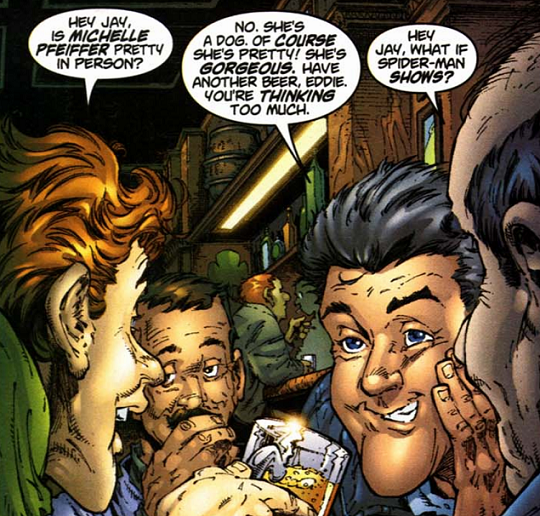 2002’s hot commodity, Michelle Pfeiffer. I think the original reference was Farrah Fawcett but the editor (Axel Alonso of Preacher, 100 Bullets and Jay Leno & Spider-Man: One Night Only) made him change it.

To Jay’s consternation, Spider-Man appears and commercial producer/director/whatever who cares Dylan is ecstatic. To shorthand that he’s a douchebag Zimmerman has him call Jay “Jay-O”, the least convincing nickname for Leno ever. Try something like “Chin” or “Cool Ranch” or “Your Career Hinges On Hugh Grant Picking Up A Prostitute”. This being a GM commercial, the setup has the two sitting on the hood of a car. It’s at this juncture I ought to mention that the story was serialized in three parts and as such features cliffhangers. The one for part one is a stage light falls, smashing up the car and presumably killing our heroes. A running feature to this 15 page blowjob is that Leno is a regular dude who will, say, decide to help clear the debris from the car until informed it’s a “union thing” and the producer could be fired if Leno provides aid. Spider-Man thinks the stage light falling was someone trying to kill them, but Jay brushes it off as paranoia. One thing I grudgingly admit Zimmerman does well is writing Leno’s dialogue in that true to life, Zimmerman’s Leno is completely unfunny and more than a little problematic. Check it: 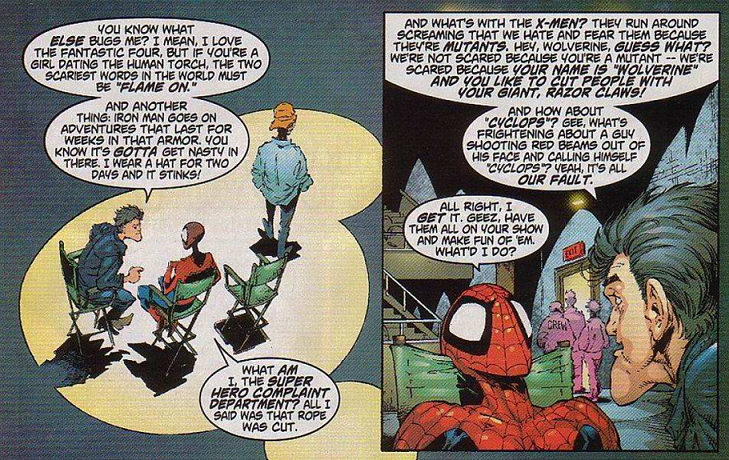 “I’m telling you, if Emmett Till could whistle like Banshee I’d support beating him to death!”

Guaranteed Leno has a lot of Legacy Virus monologue jokes he doesn’t want anybody dredging up. Just sayin’. Men in the audience start shooting at the pair, and Spider-Man conveniently is out of web fluid, so Jay declares “this looks like a job for a professional stand-up comedian” and that’s how you get the indelible image of the Amazing Spider-Man hanging on for dear life to Jay Fucking Leno’s motorcycle. We’re still only 66% of the way through. In the blessedly final five pager, they fight off goons while bantering about a multtitude of topics, like how nice is LA, who it is that’s being targeted for assassination, and whether or not Spider-Man could guest on The Tonight Show. It really makes you nostalgic for the patter between Jay and Pat Morita in Collision Course. Y’know, I’m surprised that’s not referenced. “Hey, this isn’t the first time I’ve traded lame barbs while pretending to be an action star!” To the surprise of no one unless you’re a stupid baby, Dylan the commercial producer hired the assassins, doing so in order to produce footage for a reality pitch he calls Surviving the Marvels. The premise seems to be every week a superhero is paired up with a celebrity and the show tries to murder them. Fine, who cares, there’s no stakes here, you might as well pull off a mask and it’s an old man achieving a real estate scheme. The “punchline” to the whole endeavor is Jay indeed invites Spider-Man on The Tonight Show and true to his prediction, Spidey freezes up. He was doing fucking talk shows as a teenager before Uncle Ben got shot, don’t give me this shit.

To my surprise, Greg Capullo provides the artwork for this mess. I think around the time this was published he was drawing Spawn, but now he’s best known for his collaborations with Scott Snyder, on Batman and the Dark Knights events. He does a thoroughly competent job (the real litmus test is if The Chin juts out enough), but it’s amusing to contemplate that one of the biggest artists in the industry once had to draw a fucking Jay Leno comic to pay the bills. I mean, it is what it is. I’m not going to begrudge a guy for taking a gig that increases exposure and gets a foot in the door at Marvel Comics, even if the project itself is embarrassing garbage. There are even some nice flourishes Capullo accomplishes, like creating a reflection in one of Spidey’s eye pieces. He also succeeds at creating a variable grotesque chin on Leno, so that the characters runs the gamut from “man with sore jaw” to “authentically Jay Leno” to “Robert Z’Dar”. When the content on the page is so inane, you’ve got to create your own entertainment and “find the most fucked up chin” is simply that. 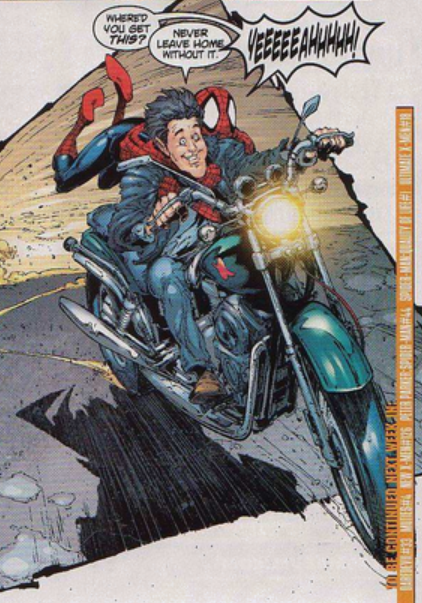 Imagine drawing that and being able to look yourself in the mirror afterwards. It’s impossible.

The great thing about this debacle is that somewhere, deep down, Marvel knew they couldn’t actually sell a Spider-Man/Jay Leno comic. This was serialized in three parts across a number of the monthly offerings, as if to say “you want to read Priest’s Black Panther? Well fuck you, here’s some JAY LENO in the back! And you’re gonna pay for it!” They literally had to give this away and to chop it into portions such that it’s incomprehensible to anyone who doesn’t invest in at least three comics over three months. That shows a serious amount of faith in the material. I have no insider information on why the material was commissioned, but given Zimmerman’s work at Marvel reeks of “starfuckery” I imagine it was a case of “I got Jay Leno to accidentally sign a piece of paper that lets Marvel use his likeness in a piece of shit comic”.

Ron Zimmerman’s reign of terror at Marvel ended as quickly as it began. Once he made his mark with Get Kraven, Rawhide Kid: Slap Leather (the joke is he’s a gay) and Ultimate Adventures, he faded into obscurity, his only credit past 2003 being an unwanted sequel to his gay joke miniseries. OR SO I BELIEVED UNTIL I RESEARCHED FOR THIS PIECE. To my chagrin, people do not simply cease to exist when you stop thinking of them. Zimmerman is still out there, o the margins of Hollywood, picking up the scraps: he worked on a season of professional pedophile grooming program/Disney sitcom Shake It Up! and even wrote an episode of The Simpsons that I recall was pretty good. He also has a graveyard of a Twitter account that features such embarrassing occurrences such as these: 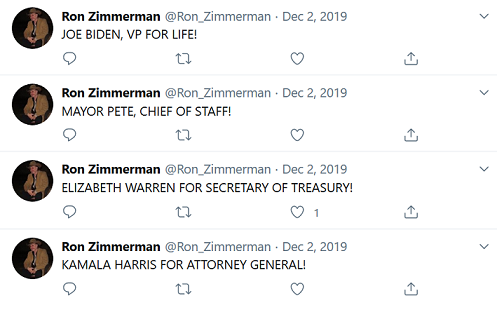 Well, he’s not a Trump supporter. There’s that at least… 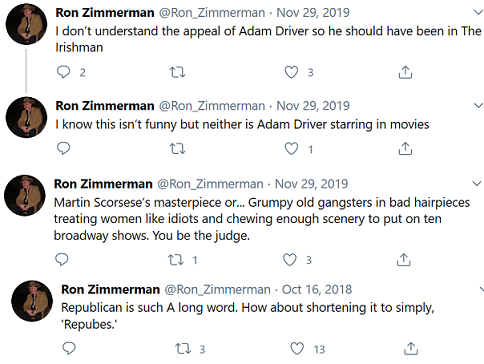 Why yes, he does wear a cowboy hat.

But what can I say. I haven’t written an episode of The Simpsons. (May I mention that with Leno’s direct participation The Simpsons created a funnier and less flattering product, “The Last Temptation of Krust” from Season 9, than this garbage.) Zimmerman knows this puts him a station above so that writing credit is his Twitter banner. So yes, in that respect I am jealous of him. Not for this comic, though, which I found unreadable and a shameless ploy to ingratiate with one of the more irritating personalities to then grace our television landscape. As a Leno connoisseur I must also judge it to be poor, not as good as genuine curios like his feature film, that time he was in a John Waters picture, or the speculative fiction novel Jay Renal, which imagines a world in which everything was the same but Jay Leno was dying of renal failure. (Preorders are going fast!) There’s no reason to give this any thought because I just did all the thinking for you. You’re welcome.