Beth:  So what did you think?
Sleep Goblin: These are my main take-aways:
1. Why couldn’t the artist draw Amy? 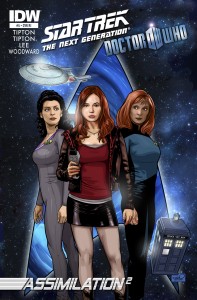 2. Even though the story itself was rather flat, I appreciated that all the characters really sounded like themselves.  I could actually hear them all saying those things in their voices.
3. I am such a nerd that I pulled up my saved Star Trek universe timeline and figured out where this all fits into it, and then did all kinds of side reading about Zefran Cochrane and the Borg.
B: That’s adorable. I don’t think Amy or Rory were drawn especially true. Maybe the artist was a much bigger TNG fan because they were all drawn impeccably. Especially Riker.

SG: I thought all the guys were really well done.  Sometimes Rory wasn’t great, but the doctor usually was. Amy was almost never even recognizable
B: I agree with you in that the story was kind of goofy, but the characters all sounded like themselves
It makes me think back to that weird Dr Who/Sherlock fanvid, you know the one with the creepy dead eyes?
SG: No, I don’t know much about fanvids except the few you’ve made me watch recently
B: You would think that that would be a mashup that would work really well but it just…didn’t. And when you sit there and think about “What would mix really well with the Dr. Whoverse?” ST: TNG is not what immediately comes to mind.
SG: It worked though!  I think it could have been better, i think their scope was too big for the length they used
B: I agree, it worked pretty well. It wasn’t amazing, but I thought it was entertaining
SG: I did giggle a few times
B: I especially loved the “flashback”
SG: I laughed when Data pulled Riker out of the water, because I could just imagine him doing that, all stiff and straight-armed
B: Everything about it. The art was very clean and retro, Kirk was obviously still a total hobag…maybe the 4th Doctor laid it on a little thick with the “Jelly Babies?”
SG: In fact, I think he did…Oh man, the fight scene was absolutely insane
B: You mean the fight scene where Kirk karate chops a Cyberman?

SG: Yes!
B: LOVE
SG: I mean, it was spot on, but so crazy
B: Seriously lost it
SG: There’s one part where the Doctor is just sort of levitating on his back, and was probably supposed to be knocked backwards, but there’s no one there to knock him back
B: I think I missed that! Or forgot it, either are likely. Surprisingly a lot of Guinan
SG: And they show the Cybermen being strong enough to just crush Kirk’s phaser with a single hand, and yet here he is, whacking away
B: haha That’s Kirk for ya though

SG: I know, so full of himself. “Don’t worry, I’ve got this!”  as he goes flying through the air for a side kick which, somehow, sends the Cyberman flying…it’s so true to TOS
B: Can I say I honestly never though the Cybermen would be the ones that got the upper hand
SG: No, they never seemed very creative to me. In their thinking I mean
B: And I don’t know…they always come across as sort of bumbling. they get these ornate plans that always go badly
SG: The Borg plays out across several series of Star Trek, and a few movies, and is a serious threat. And the Cybermen were always like, “Well, the Doctor single-handedly shut down an entire operation again”
B: Exactly! The Borg always come across as totally efficient. I did like that the Conduit Borg guy tried to assimilate the Tardis…Nice try!
SG: Yeah, that was pretty sweet. And then Data became the Tardis!  I would have loved to hear more about that. And I liked when the Cybermen catch Data an 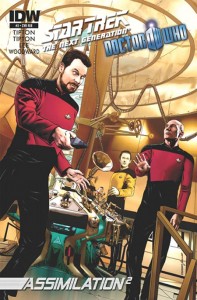 d say, “oh.. I guess you’re good”
B: “This one needs no upgrades!” Good old Data. I loved how delighted the Doctor was by Data
SG: Yes! He would be too, Data is the best
B:  Refresh my memory…was Wesley Crusher absent?
SG: Yes, he’s at Starfleet Academy when this takes place.  In fact, based on the star dates, the very next episode after this took place was when the Enterprise had to go to the academy because one of Wesley’s classmates was killed during a flight exercise
B: oh, I’m so glad you’re keeping track of the Timeline
SG: Just a couple of episodes later is “I, Hugh”, which is when they capture the teenage Borg and try to desimilate him; and they had this big plan to upload a virus into him and send him back to destroy the Borg, but they all have this crisis of conscience and decide not to do it. So at the end of this, the Borg is thinking about time travel
B: I was going to mention that. I knew it wasn’t the greatest idea ever, restoring the collective
SG: And then later, during the movie First Contact, they actually used time travel to try to prevent humans from making first contact with the vulcans
B: I remember that, I love that movie.
SG: They tried to prevent Zefran Cochrane, the American who invented warp travel, from making his first flight
And Borg technology crashes on Earth somewhere, which is actually referenced in the Enterprise series. And Cochrane, who should have died way before Kirk’s crew existed, shows up in TOS because he decided to die in space and some alien they call the Companion grabs him and reverses his aging and keeps him the same age for 150 years just so it wouldn’t be lonely. So all three Captains of the Enterprise actually end up meeting this guy
B: Well THAT’S interesting! Could almost be the Doctor
SG: all thanks to the Cybermen telling the Borg about time travel
B: *head explodes* So this would be before the events of First Contact
SG: yes
B: Got It….Oh right, because LaForge didn’t have his visor in First Contact
SG: First Contact is star date 50893.5 and this was 45635.2
And the Locutus storyline with the Battle of Wolf 359 (which the Doctor pulls a Bad Wolf reference) was Star Date 43989.1-44001.4, So this is between those two
B: Yeah I caught the Bad Wolf reference
SG: Wolf 359 is where Captain Sisko’s wife dies
B: I did enjoy that bit of continuity to The Doctor tells Amy & Rory to stay behind and they say “no” and he’s like “great!”
SG:Haha, I actually laughed when they said they’d be ensuring the safety of the Enterprise away team Riker is like “I can’t promise you protection” and Amy is all “it’s cool, I’ll keep you safe”
B: haha. I liked that Picard seemed to get attached to Amy right away
SG: Who doesn’t?  She’s pretty great
B: A lot of people don’t like Amy. I always did. It’s Rose that gets stuck in my teeth.
SG: Fun fact: The Deltans of Delta IV, the first planet that’s attacked by the Borg in the comic, appear in Star Trek movies 1, 3 and 4. They’re always depicted as being bald, and they’re so highly sexual (to the point that they make everyone around them get hot and bothered just by walking into the room), that they have to take an oath of celibacy to enter Starfeelt.
B: Oh I remember them
SG: They don’t really show up after that though, so now we can blame the Cybermen for that too
B: Had you seen the guys on the Mineral planet before?
SG: I feel like I have, but I forgot to look them up. I think it was the Animated Series 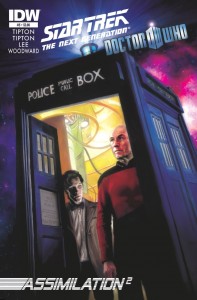 B: Did you get the “Art Gallery” at the end of Volume 2? It was delightful
SG: They’re not showing up on the Star Trek wikia, and I’m pretty certain they would if they were in something else
B: There is something so viscerally appealing about seeing Picard stepping out of the Tardis
SG: I did! I had an art gallery at the end of both volumes
B: Several of those I would frame
SG: The one with Kirk and the Cyberman is pretty great
B: YES! Oh…did you giggle when you saw the picture of Riker playing Jazz Trombone?
SG: Always
B: Because I know did. Hee…I love him, such a cheeseball
SG: I don’t think I’ve ever not laughed when he does that in an episode. Which just reminded me, did you ever see the Twitter account for the 8th season of TNG?
B: I don’t believe I have
SG: @TNG_S8  Feb 14 – A nymphomaniac worm controls Riker’s mind and body to seduce the Enterprise’s female crew. Nobody notices, it eventually dies of old age.
B:  Did you see the comic about why O’Brien has the worst job on the Enterprise?
SG: I did!  I posted it to Facebook and then put it in my RSS feed.  @TNG_S8  21 Jan 2013 – Worf unwillingly participates in his niece’s coming-of-age human hunt. Riker has misplaced his chest comb and it’s getting bad.

B: HA!
SG: @TNG_S8  8 Nov 2012 – An alien boy pretends Data is his science fair project to hide him from military forces. Riker’s sonic shower is set to “silky jazz.”
B:  I recommend listening to Will Wheaton’s episode of the Nerdist podcast, he’s got some funny Frakes/Stewart anecdotes. SILKY JAZZ LOL
SG: @TNG_S8  28 Aug 2012 – A company needs help when their knockoff Datas start exploding. The warp core dries up because someone (Barclay) left the cap off overnight.
B:  haha Barclay!
SG: Sidenote: Barclay and Moseley BFF
B: LOL I never would have put that together had you not said
SG: I only just realized when I read that tweet, now I can’t stop laughing
B: I loved this one: Wes gets his amber collecting club trapped in amber. Picard’s end-of-episode speech segues into a meandering rant on turbolift etiquette. That’s so Wes!

Molly and I dig in to Doctor Who’s 8th Series and dish on Peter Capaldi, Jenna Coleman, and Samuel Anderson as the enigmatic Danny Pink. Don’t forget to check out Lost In Asgard!

I’m going to get right into this because there’s plenty I want to accomplish. Basically kiddies we’re talking TV today. A television show that I watched for years has ended and I just recently tried to get on the bandwagon of another that’s been around forever. At the same time I’ve been trying to figure…

Episode 16 – Dr. Who Christmas Special ‘Time of the Doctor’

Molly and I discuss the high and low points of Matt Smith’s farewell episode, why we have issues with Dalek People, wooden cybermen, and Stephen Moffat’s insane retconning. Were we the only ones who had Castaway flashbacks with ‘Handles’? How did I find myself finally liking Clara? And HOW EXCITED ARE WE to finally see…