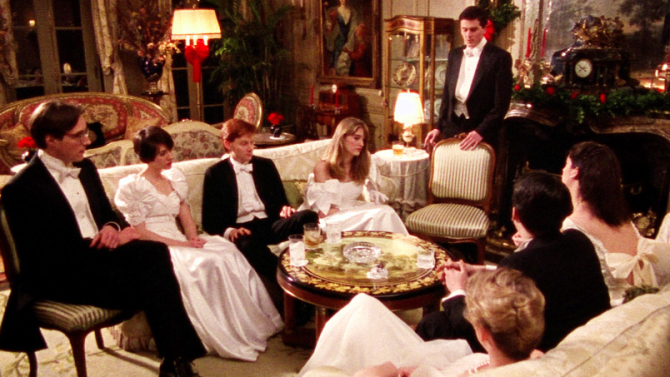 Sammi and Beau take on Mansfield Park in discussing Metropolitan, Whit Stillman’s clever tale of young Manhattan socialites in the early 1980’s. The whip-smart humor of the Sally Fowler Rat Pack hit our intellectual sweet spot and their rapid-fire dialogue evoked our love for both Jane Austen and Gilmore Girls. Stay tuned for the miraculous declaration at the end of this episode (spoiler: the declaration is that this clever, lovable movie made us rethink Mansfield Park). Please enjoy responsibly.

This movie gave us a lot to chew on and, as we discuss in the show, is more intellectually stimulating than our usual fare for the podcast. The concept, structure, and dialogue all earned high marks from us, but it might be Stillman’s celebration of Austen’s wit and morals (with a dash of romance) that put this movie over the top from merely ‘good’ to ‘great’ for us. And it was great seeing Chris Eigeman playing what is essentially a younger version of Digger Stiles. It makes us wonder if Amy Sherman-Palladino wrote his Gilmore Girls character specifically for him.

There wasn’t much bad here, some bandying about with the word “slut” was a tad cringe-inducing, and dates the movie more than any of the costumes or sets ever could.

Rick Von Sloneker, both in character and in person.

A refreshingly intelligent movie and probably the purest nod to Austen we’ve seen. It made us both rethink Mansfield Park, so that’s saying something.

Next ArticleDeliver The Profile Episode 56: The Sound of One Hand Killing