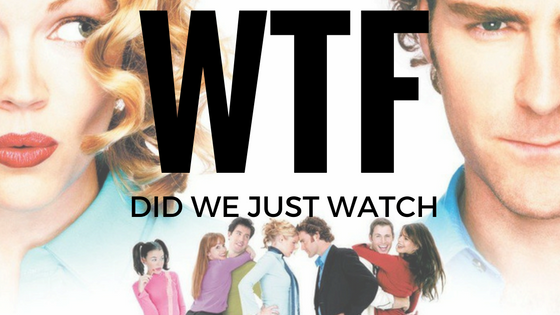 In this episode, Sammi and Beau are joined by guest Karolinn to wonder why this movie was made, why any movies are made, what is the meaning of art, and why is that pool table inside a black void?

Revisit 1995 by way of 2003 with us in ‘Pride & Prejudice: A Latter-Day Comedy,’ a retelling of Austen’s most beloved classic set in the world of the Latter Day Saints. An interesting concept with great potential that was squandered on bland modernization and some very (VERY) questionable character choices. We apologize for the abundance of swearing.

A lot of gorgeous shots of Utah, which is a lovely state. The device of framing the story of Pride & Prejudice in a church setting was inventive and interesting, it had real potential. Unfortunately the opportunity was squandered in trying to make this film appeal to a broader audience. When you’re trying to split the difference between ‘hip’ and ‘traditional’ what you typically end up with is a Sears catalog of a movie.

There were a few funny beats – the news story hallucination, Jane’s constant Spanish guitar intro, but it wasn’t really enough to make us look past…

…pretty much everything else. It’s not a good sign when a movie makes us nostalgic for the glossy but harmless sensibilities of ‘Material Girls,’ but this movie did. Elizabeth is unjustifiably rude and Darcy is a self-involved prig who pretends to read Kierkegaard at parties. We’ve all met that guy, NO ONE likes that guy.  This is not the Elizabeth and Darcy we all know and love.

The misogyny. I mean, wow. We understand that giving this movie a Christian backdrop changes the dynamics somewhat, but this film posits that all of the male characters, no matter how badly behaved, are already where they are supposed to be in life, and need no character growth or development. It’s the female characters who are expected to grow, learn, and change. And what is the lesson when it all comes down to it? Listen to men.

Then we have the Collins character. Oh, where to start? His tendency to “not take no for an answer” is canonical, sure, but here it is taken to extremes. His behavior is aggressive, vindictive, and borderline abusive. At one point he says “my mother told me that when a woman says no she really means yes.” Um, no, dude. She means no, and the GTFO is implied. But rather than calling Collins out for this behavior, Elizabeth rewards him by facilitating a relationship between him and Mary. She encourages her friend to pursue a man who has shown himself to be emotionally abusive. And this is where the movie lost us and lost all hope of redemption. We’re not okay with it, and we’re pretty sure Jane wouldn’t be either.

wordless screams into an uncaring void

Sammi and Beau take on Mansfield Park in discussing Metropolitan, Whit Stillman’s clever tale of young Manhattan socialites in the early 1980’s. The whip-smart humor of the Sally Fowler Rat Pack hit our intellectual sweet spot and their rapid-fire dialogue evoked our love for both Jane Austen and Gilmore Girls. Stay tuned for the miraculous…

Next ArticleDeliver The Profile Episode 51: Episode 50