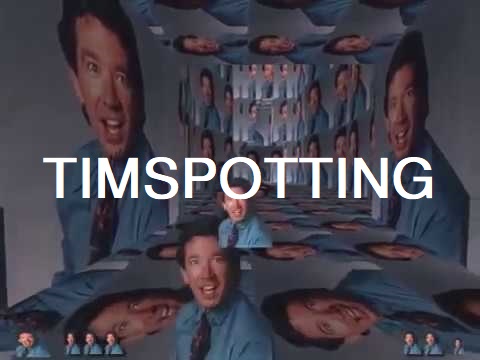 Welcome to Timspotting, an irregular feature for an irregular guy. Tim Allen is a man of contrasts: he indulges in retrograde gender roles for laughs and yet he’s also Buzz Lightyear. Rather than review his new show with Richard “Al” Karn, Assembly Required, I thought I’d listen to an interview with him conducted by Marc Maron for WTF so you wouldn’t have to. Now, a lot of people have strong opinions of Mr. Maron, most skewed towards the negative. His tics are evident, most of his early interviews skewed towards him addressing people he aggrieved when he was abusing substances in the 1990s, and frankly he can be annoying to listen to. I’ll say my perception of Mr. Maron didn’t exactly improve with this hour plus of “entertainment”. It takes him more than 11 minutes to get to the Tim.

That said, Marc Maron is a whiz at the ad read. I didn’t even realize it was an ad read until halfway through; I thought he was speaking honestly, not plugging some shit he wants me to buy. That speaks to how good a broadcasting personality Maron has become: there’s no separation. He slithers into hawking Better Help like he’s descending back into a wicker basket, prompted by some pungi playing. He’s no longer human. You keep it in mind when he does the pre-show ramble about cutting his hand and making sure he has a full tank of gas in case the QAnon people attack Los Angeles and he has to split without much notice. Because if you think he’s human, you’re inclined to eventually shout: Goddamnit, man! No one cares about your fucking allergies! Get to Tim Allen!. But that’s an irrelevant critique, because Maron isn’t a person, he’s a broadcaster. The delineation is clear, that a broadcaster exists to fill time and a human has hopes, dreams, aspirations. Marc Maron has none of that! He just wants to sell you both hatred of going to the Post Office and also the concept of the hypochondriac recovering alcoholic who lives in some sort of Jay Leno’s garage but with cats instead of automobiles. If you believe he cares about your hydration I’ve got a fucking bridge to sell you. He just wants to keep the Liquid Death people happy.

At first you think Maron and Tim will bond over their shared profession as comics, Maron honing in on “his machine, his funny vessel” being forged on the road. It falls away quickly, however, because the host doesn’t have a whole lot of power in this interview. Usually Tim will go on a long ramble and then Marc will counter with a brief followup that elicits another long ramble. They never really develop a rapport, though I’m sure part of that is due to them not being in the same physical location. For instance, Maron never capitalizes on Tim’s tacit admission he engineered the coronavirus (quoth Timothy: “I’m interested in viruses as an entity…I always have been”… SUSPICIOUS). You’d think that’d be a pretty big get for a podcaster but he lets it slide. Tim Allen got the vaccine a month and a half ago, incidentally, which is surprising because I didn’t think he’d believe in vaccines. It goes to show rich guys will take vaccines they don’t even want to just to stiff the little guy.

Things turn to discussing Tim’s early life, starting with the horrific drunk driving accident that killed his father to his youthful delinquincy. “I was an f-up”, comparing himself to Eddie Haskell, the character from Leave It To Beaver. I don’t recall Eddie getting into serious drug weight, Tim! Now, the contention has always been that Tim snitched on other guys, but from this interview it’s suggested he and someone else took the hit for 20 other guys. So when asked by Marc “who are your guys?”, Tim can reasonably answer “not the 20 who escaped prosecution to my detriment”. I’ve joked that the title of his book, Don’t Stand Too Close To A Naked Man, was a lesson he learned from prison, and apparently he learned “sarcasm doesn’t go over too well”. Funny voices, yes. Impressions, yes. Sarcasm, no. I think this might be the rosetta stone for Tim’s comedy: he does material that won’t get his ass kicked in prison. He was in a level 3 federal prison, which he compares to camp. Basically prison taught him to be less of a fuckup and to not knee-jerk distrust authority. Your standard felon to Republican pipeline story, really.

The recovery stuff vaguely interested me on account of me also being in recovery, but it’s pretty anodyne stuff, nothing groundbreaking or unexpected. This section does have my favorite Maron question because of how awkward the transition is: “when did you start hitting the booze hard?”. You’d think after 30,000 episodes he’d get better at these. Tim states he’s 23 years sober, meaning he was still knocking ‘em back well into the run of Home Improvement. Speaking of which, there’s a little on the creation of tht in here. The Disney people wanted to be in the Tim Allen business so first they offered him Turner and Hooch, a TV version. He refused. Undeterred, they offered him Dead Poets Society. Imagine him in Robin Williams’ role. (Imagine him in Robin Williams’ final role.) Finally Tim threw out the amalgamation of all the things he wanted for a show, which was a parody of This Old House, a neighbor that can’t be seen, three sons. What an odd series of elements to demand for your sitcom.

Theory: Tim Allen is Joe Biden. It dawned on me during the episode that the stop-start rambling of Tim’s anecdotes reminded me of the President. Although I’m sure he didn’t vote for him last November, the two share more than anyone might care to admit. They’re both old white men in positions of power (FOX lineup mainstay, President of the United States) they in no way earned. Like, Tim Allen will go from talking about a woman in the Reagan administration to how he liked to chase animals upriver when his dad was still alive. This kind of staccato thinking continues throughout the interview and I think it’s what prevents Maron from forging a bond with him. Maron will ask a question and then Tim will throw a bowling ball in the vague direction of the question. Enterprising audio people could chop and screw the episode so that the Q and A correspond even less to each other, creating a truly disorienting experience, like drinking a bottle of cough syrup and watching New Amsterdam (the show about the immortal guy, not the medical drama) on a laptop with a cracked screen while sitting in a bus shelter. Come on, I’m sure you’ve all done that before.

Early on Marc says “I know people judge him because of his politics”, but politics only figures briefly into the episode. Of course that means politics does figure into the episode. Basically, Tim hates taxes, referring to the government as a “silent partner” that takes 50% of his earnings. Perhaps relevant to his political views: “there is a part of me that’s angry all the time”. It might explain the qualified praise he heaps upon Donald Trump (which has blown up in the press, of course) that he likes that he made people upset. Well, you know what, I can actually see his point. Forget that he made outcomes worse for all minorities, killed a half million people and brought the federal government to even greater dysfunction; the way he caused all the most annoying fucking people to lose their goddamn minds did spark some joy in me. He broke liberal brains the way 9/11 broke conservative brains. Anyway. Tim’s metaphor for liberals and conservatives is that the former are designers and the latter contractors. Designers are kinda, you know, and have no understanding of what’s possible or what it costs, but they have lofty ambitions. Conservatives by god get things done. Hence his new show, Assembly Required: “I like mentoring people about getting stuff done”. I might have to do a Timspotting on that, by the by…

Maron commits great offense when, preceding the interview, he does his own version of the signature grunt. That is as bad as a white person using the n-word and no I will not expound on that. Of the grunt, Tim explains that it is what men sound like when they’re eating, which is news to me. Maybe I’m not enough of a man, because I don’t make those sorts of noises when eating. There’s not as much insight into his career as I was hoping; what I’ve stated before is essentially what you get in terms of fun facts. Zachery Ty Bryan’s name is not once uttered. Oh, apparently the original version of The Santa Clause opened with him shooting and killing Santa Claus, and Disney balked at that. It’d be great to see Tim Allen Castle Doctrining a beloved children’s character. Fans of the Greater Ronnie Obsessions Universe will be pleased to know that Tim mentions Jay Leno multiple times, even citing him as a reason that Last Man Standing has improved in its final seasons. Imagine having a sitcom so shitty that JAY LENO could improve it.

In conclusion, Tim Allen is a confused old man who hates taxes. I hope you enjoyed the first installment of Timspotting, and I can promise you this will not be the last.