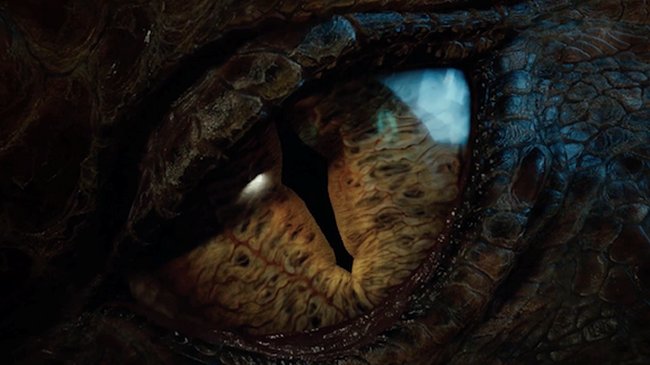 Non-Demand – The Hobbitses: An Unexpected Desolation

It took me eight months to watch the second installment of The Hobbit film series. The movie, The Hobbit: The Desolation of Smaug, came out December 2013, and I finally watched it a couple of weeks ago on HBO. The reason it took so long is because I really didn’t like the first installment, The Hobbit: An Unexpected Journey. And unfortunately, I’m of mixed feelings about part deux.

First of all, when you read this and I reference the title or the character named therein, please, PLEASE, imagine the pronunciation as SMOG. I cannot stand hearing the name pronounced SMOWG. I don’t care if the ‘ow’ sound is right and I am wrong, but every damn commercial made me want to slay a small village. It seriously makes me think of Cartman saying it every time I heard it. “Respect my authorita! I am SmOWg!”

Now that I’ve gotten that out of the way, I can get to something that matters. Well, in the scheme of things it really doesn’t matter, but, I, um…okay. First off, the movie starts out kinda snoozy. The first half hour is yakkity yak, blah blah blah, and a whole bunch of who gives a hot shit. Then the elves get involved. You know, Legolas is there to cash in on the Lord of the Rings trilogy popularity, as well as that girl from Lost (Evangeline whocareswhatshernameisputherinlotsofmovies Lilly). Things pick up there, with elven politics courtesy of many a fan girl’s wet dream Lee Pace, [accurate! – Beth] there’s a strange sort of elf, elf, dwarf love triangle going on, and Bilbo gets to creep around trying to free his companions from imprisonment.

When his friends are freed, it’s followed by a fun barrel chase that looks tailor-made to be adapted into a theme park ride somewhere (are you paying attention Universal Studios?).  Not only are the elves trying to apprehend the dwarves and their hobbit “thief,” but some mean looking orcs are still on their tail, and happen to land a poison arrow into one of the diminutive heroes. Of course, the dwarves don’t know it, but the hot elf chick does, and Legolas likes hot elf chick, so we get to keep them in the story- yay!

From there, we go to the town that Smaug once decimated, with our wee posse smuggled in by this trilogy’s version of Aragorn, who-gasp-has an ancestor that failed to kill Smaug and thus disgraced the familia. If that sound familiar, well, yeah. So there’s a whole bunch of human malarkey that kind of drags on a bit, echoing the Wormtongue stuff from The Two Towers, and all you really want to do is get to the damn dragon already.

Which we do, and it’s glorious.   I reviewed How to Train Your Dragon 2 not that long ago, and bemoaned the lack of dragons in cinema. Thank Gandalf’s beard the few instances are good ones. This is pretty much the most perfect version of Smaug I think one could hope for, right down to the digitally enhanced gravelly voice of Benedict Cumberbatch.   He slithers, and then bellows, and then he’s menacing, and breathes fire like it’s some kind of dragon arousal technique. He’s imagined wonderfully, and rendered just as good. Then they had to go and ruin it by ending the thing the way they did.

One of my problems with this flick is by stopping at such a crappy cliffhanging midpoint. Smaug is unleashed onto the neighboring village, promising death, and the screen goes black. What. The. Hell. I understand these movies are part of a bigger story, but shit, son. This is like if The Empire Strikes Back cut off as Vader said, “No, I am your…” His what? His father? His father’s best friend? His podiatrist?? But no, Empire let there be a resolution to the story it was telling.

In Desolation of Smaug there is no resolution. Each of these movies should have a beginning, a middle, and an end to them of some kind.   The Lord of the Rings movies all stood apart on their own for the most part, but were all continuations of the same story. Here, there’s just a bunch of stuff awkwardly piled together. That brings us to the other problem.

The Hobbit movies are just too damn long. Originally, there were only supposed to be two films, but it was decided to make three.   Peter Jackson, co-writer and director of all these flicks said it was so they could tell the complete story. But as I’ve alluded to already, it’s more likely so the studio can emulate as closely as possible the success of the LOTR. So they expanded a small book into three movies, drawing on other materials to fill in the gaps of a three hour movie, because the LOTR were all that long.

But all it does it produce a bloated mess. And it really is never allowed to even be its own story. With all the allusions to LOTR, including an utterly boring subplot of Gandalf and the Necromancer, the Hobbit movies end up being a bad prologue to something I’d actually watch again. If they had kept with the original plan, and done two movies, and focused on the story of The Hobbit, these movies would be much better, and might even rival the LOTR.

Things don’t look like they’re turning around for the better, though. The last of these movies underwent a name change a few months ago, and it doesn’t instill much confidence. Originally, the film was supposed to be subtitled “There and Back Again,” which was a wonderful title. However, we now get “The Battle of the Five Armies,” because the executives mistakenly think the LOTR was popular because of the wars and battles and violence, and so this story should be that way also. But the thing is this isn’t LOTR. This isn’t Middle Earth’s story. This is Bilbo’s story. Or at least it used to be.

Episode 13 – The Hobbit: The Desolation of Smaug!

Brian joins Molly and I to talk about everyone’s favorite Hobbit, Bilbo Baggins! (Sorry, Samwise Gamgee). We discuss Thorin the unattainable, CGI weather, Smaug the FABULOUS, Lee Pace’s majestic eyebrows (you know I had to go there), why Martin Freeman is the best, and the inexplicable Elven-Dwarf romance elements. Not that we blame her, Kili is…

Next ArticleAxl and Eva Sitting in a Tree