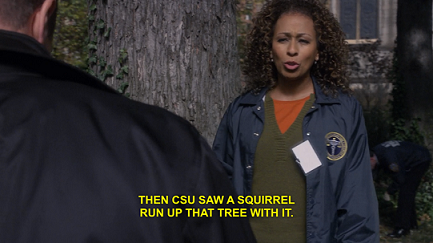 Law & Ordocki: Law & Order: SVU and the case of the penis thief squirrel

Hello, my name is Ronnie Gardocki. I am an orphan who writes about Law & Order in exchange for cheese sandwiches and wine. Law & Order, much like The Simpsons and Saturday Night Live, is one of those American cultural institutions that will inspire a number of shitty thinkpieces on websites like Salon.com when it’s snuffed out. For my first foray into the franchise, which spans decades and multiple spinoffs, foreign adaptations, crossovers, Richard Belzer was temporarily the President of the United States during Clinton’s impeachment, I decided to tackle the sublimely absurd Law & Order: Special Victims Unit, the last refuge of actors who live on the East Coast. (From 1995-2004, it was actually a requirement that all working actors who set foot in New York state had to appear in an episode of the show.) If Law & Order is the stoic baseline of the franchise, that makes Law & Order: Special Victims Unit is the repository for all the freak material that couldn’t fit in the main show. (Criminal Intent, incidentally, is the show that charts the decline of Vincent D’Onofrio from a respected if oddball actor to what the Thing looked like in early issues of Fantastic Four.) To establish this, I’ve decided to analyze the most preposterous episode of SVU. Keep in mind that’s saying a lot, considering one time Chris Meloni busted up an animal smuggling ring and over the course of the episode a rapper was eaten by a tiger and Dann Florek rescued a monkey from a basketball. Witness “Perverted”, a Season 11 episode that confirms the existence of successful DNA falsifiers and never does anything with that plot point ever again.

SVU started off as a fairly down to Earth procedural that occasionally had important things to say, like rapists are often played by former TV stars and that the Internet is not to be trusted, especially with the kids on it. With each successive season, however, the relationship to reality becomes more and more strained to the point that a talking dog could join the cast and I wouldn’t question it. “Sure, let’s see if the dog is a family man with a troubled relationship with his wife or if the dog has some tragic backstory that explains why they got into SVU!” “Perverted” starts off simply but becomes convoluted gibberish that culminates in, what else, women in peril. If women weren’t in peril, to be saved by someone else in the cast or by the character herself TAKING HER LIFE BACK (the feminism of SVU mimics 90s Lifetime movies), what would they be doing? There’s a dead, castrated biker found in the park, with Olivia Benson (Ghoulies actress Mariska Hargitay)’s card in his pocket. The biker aspect is a trojan horse designed to waste about 10-15 minutes of the runtime with a Sesame Street version of the Sons of Anarchy. Most SVU plots could be successfully relayed on a Post-It note, so there has to be some filler, some false leads, some Richard Belzer one-liners. They might not be good, but he gets paid every week to make 3 wry comments that don’t do anything for anyone!

A squirrel biting off a corpse’s penis and taking it up to his tree is a subplot that should not have been left on the cutting room floor.

After the requisite amount of time has been pissed away, the dead biker’s murderer starts looking a lot like Olivia Benson, with enough circumstantial evidence that would get her the chair if she weren’t a cop and a main character. In the last several seasons the antagonists have sorta become supervillains. (When Chris Meloni’s Elliot Stabler splits at the end of Season 12, Olivia eventually gains her own fingerprintless rapist Joker character that escapes prison multiple times and kidnapped Benson on more than one occasion who eventually blows his brains out to fuck with Olivia. Yeah.) Brady Harrison can dent Benson’s bumper, make a 911 call about the murder without implicating himself and, most importantly, plant DNA evidence so unimpeachable it triggers Internal Affairs taking her into their custody. Despite the fact that the cops on SVU routinely violate suspects’ civil liberties and don’t lose a moment’s sleep, they still fucking despise Internal Affairs Bureau and its avatar, the guy who played RoboCop in RoboCop 3. He’s played so archly, so unsympathetically that SVU makes you root for grossly unethical fascists in the most transparent fashion possible. Originally the guy from Robocop 3 entered into scenes with a soundtrack of audience boos and hisses but NBC showed restraint for once. 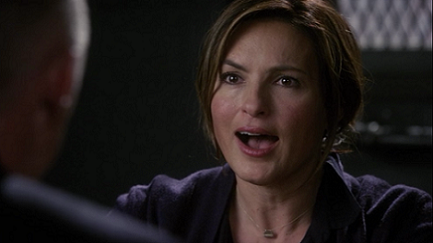 This mirrors my reaction when I found out she’s won an Emmy for Special Victims Unit.

Originally, the Law & Order format, so trademarked by noted Republican and first time author Dick Wolf, was to focus on the day-to-day of a case, from the police finding witnesses, determining suspects to the district attorney’s office prosecuting the culprit to the fullest extent of the law. It’s all there in the opening voiceover. Everything you learned about the characters’ personal lives was incidental except in a few isolated incidents. To differentiate itself, SVU promptly focused on the detectives beyond their work lives, ostensibly to show how grueling the work in sex crimes is and how it’s carried with them outside of the job. It’s actually used to show how Elliot Stabler’s shitty kids are always getting into trouble or Olivia Benson is a workaholic who, in spite of her butch dyke attire, just wants a man and a baby like all single women do over and over again. In “Perverted”, Olivia’s combating the flu, so we find that her apartment impersonal, an empty fridge and travel brochures scattered on a countertop. She bought a car in a moment of midlife crisis. If Stabler didn’t have a wife and kids to keep him grounded as a real human being, he’d spend his off duty time wandering the streets, killing hobos and eating them for their delicious hobo meat. Other characters like Ice-T and the rotation of pretty looking assistant district attorneys don’t get personal lives. I like to think Ice-T’s Body Count years are in continuity with his SVU character.

As one might expect from a program made for people who think rape can be eliminated by police standoffs and “somebody oughta DO something!” protests made at nobody in particular, there’s a fair share of stupidity in “Perverted”. Brady Harrison, who spent time in prison for a series of date rapes and believes getting repeatedly raped by the biker and affiliated Oz day players was orchestrated by Olivia Benson based on a few innocuous comments about how she can’t wait for him to be raped in prison, had the wealth ($25,000) and the foresight to seek out a shady lab that can manufacture DNA to frame Benson for a biker’s murder. I mean, getting a PI is one thing, but Harrison is basically hiring supervillainy. Now, forging DNA evidence is based on reality; this episode is based on Israeli scientists creating DNA using a DNA profile or substituting white blood cells for other white blood cells. Yet, 5 years later, “they just set crime investigations back 20 years” turned out as true as the 2012 Mayan apocalypse. We’ve yet to experience a wave of people put behind bars for 25 K and some discarded utensils. Furthermore, the DNA cooker is cartoonishly smug, who is convinced he committed no crime. He teases out lines like “any biology undergraduate could do it” and “guess your free ride is over” and punctuates it with a cold criminal mastermind laugh. I mean, I learned all my knowledge about life and the criminal justice system from better episodes of Law & Order, but I’m pretty sure concocting false evidence to implicate an innocent person is obstruction of justice and indeed a crime. Yet again SVU raises an issue, lets you “think about it, man” and never addresses it again. Treat the show like you did your stoner roommate in college: tell ‘em to shut the fuck up and pass the Doritos. 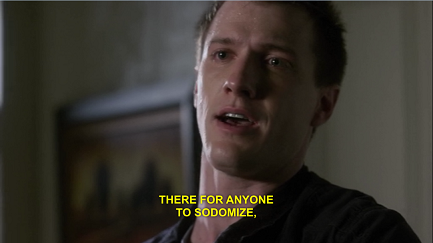 “and they cover it with soap, and you’re supposed to thank them, like they’re doing you a favor!”

Yes, it does stretch credibility that someone who’s worked in sex crimes for over a decade wouldn’t know that threatening people with rape is not the most sensitive thing to do, but SVU isn’t about “making sense” or “examining how difficult it is to arrest and prosecute perpetrators of sexual depravity and how the impact of the crime never really ends for the victims or the law enforcement tasked with investigating”. It’s meant to be nonsensical gibberish, an outrage-filled salve that ideally compensates for all the NBC programming centered on corpses of women, closeups of crying women and whatever the fuck Whitney was supposed to be. Olivia’s lesson learned doesn’t carry over to any other episodes, and the detectives make approximately 300,039 prison rape threats/jokes/jokey threats subsequent to “Perverted”. The Simpsons has a better grasp on continuity. 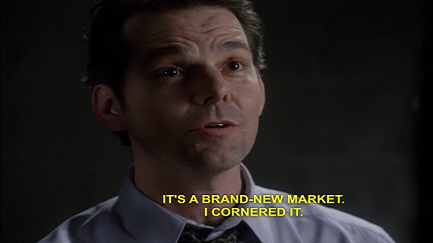 An absurd premise with nonexistent repercussions, with all the basic competence of a Batman comic book in which Commissioner Gordon thinks he saw Batman kill a guy but oops it was Catman trying to frame him written and drawn by a burlap sack full of gerbils, “Perverted” exhibits all that I love and hate about the series. It’s such a fucked up, shitty little diamond that’s endlessly rewatchable. SVU works best when it’s idiots trying to make what they think good television looks like and failing miserably. It is the television equivalent of a coffee mug a 5 year old child tried to make for daddy. It can’t hold beverages well, but it’s the thought that counts. Plus, it’s not like the show can make the country’s fucked up ideas about sexuality and sex crimes any worse.

I enjoyed this experience, and I look forward to detailing something absurd/insane/kinda reprehensible about this multimedia juggernaut each and every week/until Beth gets sick of mailing me cheese sandwiches. By my estimation, I’ll run out of material 393 years from now.