A Batman show without Batman…yet.  That could pretty much sum up the new show Gotham which started airing on the Fox network Mondays this week.  Check your local listings.  You know, for the bat-time and bat-channel.  Ever since Smallville premiered on the WB (now the CW), fanboys were clamoring for a crossover with the caped crusader.  Or even Bruce Wayne come to town for a football game or something, where Clark could banter and stare down the other most famous comic orphan of all time.

It never happened, which was okay, because Smallville had the tendency to really mess up when it came to the storytelling toward the end.  It used characters from all throughout Superman’s canon and transplanted them to his formative years, leaving me to wonder just what the hell he was going to do when he finally donned the cape anyway. 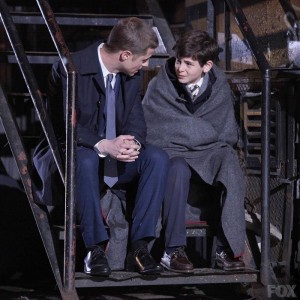 But I digress.  Back to Gotham.  The closest thing to Batman on TV since the animated series that formed many people’s opinions of what the Dark Knight was, or could be.  But where the cartoons took their initial influence from the Tim Burton movies of the 1990’s, this new show has Christopher Nolan’s baby batter all over it.  Not only did Nolan create the template for DC Comics to follow in the modern era with Batman Begins and The Dark Knight, he might as well have lent the creative team the costumes and sets for the new show.

That’s one great thing about this new show- Gotham has an epic feel and look to it.  Where Starling City in Arrow is cinematic, this not only feels like a sprawling metropolis (hehe), but it has the added Batty quality.  It looks like a movie almost, and it works better than some movies do (cough*Fantastic Four*cough*Green Lantern).

Being a big old Bat-fan, I’m gonna watch this show and recap it for all of you, and give my thoughts on it every week.  We can go over questions, comments, concerns, and in this first recap touch on more of the overall impressions I got watching the thing (I promise, not all recaps will be as bloated and self-important as this one).

What’s it called:  Let’s give it up for whoever names these things.  Episode one is called “Pilot.”

What the hell it’s about: It’s kind of the white bread version of Training Day, except there’s no one as charismatic as Denzel.  New detective James Gordon is hot on the case of finding criminals and new ways to intently stare at people, while making a promise to a young boy.  Being a police procedural in a comic book world, Gordon’s first case is the most famous of them all- the murder of Bruce Wayne’s parents, and his promise is to young Bruce to find the killer. 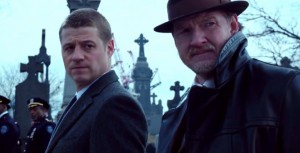 Gordon’s partner, Harvey Bullock doesn’t want the case, because it’s too much of a hassle and he’s kind of involved with the people who might’ve ultimately been behind it.  Renee Montoya does want the case (like seeing her in this!).  Long story short, gangsta Fish Moony (way to name one of the only women, Fish) helps Bullock frame a big dude without shiny shoes (watch the ep) so he can close the case faster.

Gordon is onto it, but Montoya thinks he’s in on it, and they should have had a scene where everyone pulls a guy on each other in some kind of standoff.  Oh, and Montoya goes to warn Gordon’s fiancée he might not be on the up and up.  Apparently Montoya and Barbara Kean have a past, but there are not many clues.  I’m thinking lesbian love fest, and Barbara was maybe a little criminal…who needed to be cuffed.

Through trying to find out who really killed the Waynes, Gordon ends up almost butchered in a hog plant with Bullock (who has a shining knight moment or two), until saved by Moony’s boss Carmine Falcone.  Falcone kind of gives us a little info that he knew Gordon’s dad, and the guy might have been in the mob’s pocket.  Gordon is told to later prove himself to make it look like he’s on the take already by shooting a lackey and dumping him in the river.  Of course, he fakes it, and he’s safe for now until he intently stares down another mob guy in what I’m guessing is the next episode. 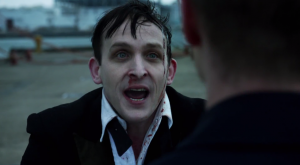 Jr Super Villain(s) of the Week:  Oswald Cobblepot, who later in Gotham life becomes The Penguin.  First glance from the commercials he reminded me of the younger, creepy brother in the movie Wedding Crashers.  I pictured him running around whining, trying to bang Gordon, all the while his monocle stays firmly attached to his eye socket.  Instead, he ends up being a kosher looking meth-head with a slight prosthetic for a nose, and a major anger management problem.  And no monocle.  Yet.  He’s the lackey of Fish Moony who Gordon is supposed to kill.  Oswald was the dude who snitched to Montoya about the frame up, see.  Apparently the man who walks like a penguin (which he is called because of a disabled walk, and a name he doesn’t like) has designs on pushing Fish out.  Get it?  Penguin?  Fish?  See what they did there? 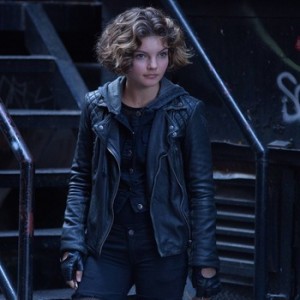 The episode starts out with Selina Kyle, your future Catwoman, stealing milk for some giant ass alley cat.  Coincidentally, she’s in the alley in which Bruce Wayne’s parents bite the big one.  Her role from there on out is to look like the best dressed homeless stalker as she goes where Bruce goes, slinking around like a, you guessed it, cat.  Must have been an easy paycheck.  No lines?  Sign me up! 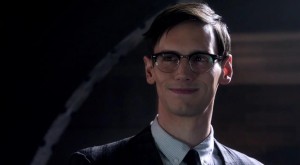 There’s also a brief appearance by Riddler as his former self, Edward Nygma.  He’s the resident CSI weirdo at Gotham Police Department, and he’s already speaking in riddles.  Bullock hates them, and Gordon figures it out.  There’s some brains behind them intent stares. 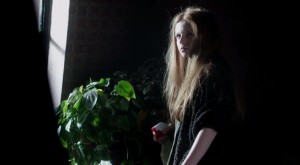 The last little cameo is wee Ivy Pepper, who is already fawning over flora.  Or is it fauna?  Anyway, the chick likes plants.  She is the future Poison Ivy, whose name should be Pamela Isley, but the producers felt they apparently had to knock us over the head with ‘ivy’ and wouldn’t get who she was by her petting leaves her whole screen time.  Ivy’s dad is the guy who gets framed for the Waynes’ murder.  She apparently has a tough life, given her hair is messy and her mom has a black eye.

Bruce Wayne grows body hair, becomes (Bat)man:  Might be a little disrespectful to speak ill of Brucey and his situation this week, since this part of the story is the death of Ma and Pa Wayne at the hands of Nameless Street Thug (or is he?).  Every Batman story, even if it’s not about Batman, starts with the death of the rich doctor and his pearl-laden wife.  Here, we get the cable version of the Batman Begins scene in which Gordon puts his coat on Wayne’s shoulders to comfort him. 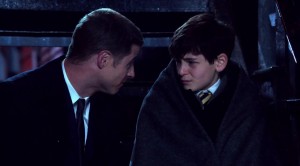 We see Bruce once or twice.  There’s his parents’ funeral, and later when Gordon stares intently, and tells the kid his parents’ murderer is still out there.  I actually think the episode would have worked with slightly less Bruce.  And he kind of rubbed me the wrong way.  What 12-year-old talks like that?  Better figure out the dialogue for young Bruce a little better, and please try to change him from the version of Bruce that’s a dick to Alfred.  I would have slapped the shit out of that kid if he snapped at me the way he snapped at Pennyworth.  Snapped.

Foreshadow like it’s going out of style:  This thing is already running long.  See all previous sections for oodles of foreshadow.

What the hell is next: A lot from the looks of it.  If the preview for next week is to be believed, just about every character’s arcs from this episode are continued in the next.  Let’s hope they don’t scatter themselves to much by trying to follow too many threads at once.  Pick a theme or subject or character and run with it for an hour.

The true test for this show will be the ratings.  Even being about Gotham City, and the best rogues gallery in comics, Fox as a channel is never kind to genre shows.  The premiere of this, and the continuation of Sleepy Hollow on a night not meant to kill programs is encouraging, but nerds should never forget the likes of Firefly or the recent Almost Human.

The one drawback of this show is the focus, like I said.  If I have to follow eight plot lines every episode, I think I might abandon ship.  It’ll be too cluttered, and the narrative will suffer for sure.  We’ve seen it before so many times.

Also, it’ll be a fine line creatively, serving up any kind of whimsical story or humor in a setting we know is only destined to get worse.  None of these characters are on a good path, and despite the trend to “go dark” in comics related stories, this town is gonna have to go REALLY dark to necessitate the rise of the Dark Knight (the rise of the, get it?!? Cause…of the Nolan…oh nevermind).  Point being, it could be one depressing ass program.

Truth be told it’s been a while since I’ve purchased a comic book.  I think in the last few years I bought a hardcover collection of a Green Lantern run dealing with the Red Lanterns and their amok-running that caused the emerald corps of do-gooders much trouble.  But beyond that I haven’t picked up a…

Oh no!  The “sequel” that I’m only sort of looking forward to, to the movie I only kind of liked, has been moved from 2015 to 2016!  The second installment to DC Comics much ballyhooed Man of Steel, with that British dreamboat Henry Cavill as the latest actor to portray Superman, was all set for…