Webster’s dictionary defines “hunk” as “a large lump, piece, or portion” or “an attractive and usually well-built man”. I believe the second definition is more relevant to my latest project, a series of articles making stupid jokes about and occasionally providing simplistic analysis to Justified‘s sixth season. Justified is a show about a man in a hat who shoots a lot of people. Based on the work of Elmore Leonard, the show pays homage to his extensive body of work while not functioning as a hollow simulacra of it. More importantly, there are hunks. Lawman hunks, outlaw hunks, other lawman hunks, lady hunks… it’s a show of beautiful people doing not so beautiful things, unless you consider rural Kentucky’s drug market to be beautiful. (Opinions may vary.) Alas, Season 6 is its last, meaning FX will soon be a wasteland of Ryan Murphy shows and wig doffing. There is intelligence in leaving the audience wanting more as opposed to the audience wanting less; I mean, does Raylan even go to the Nuclear Power Plant anymore? “Fate’s Right Hand” is an excellent funny yet heartbreaking season opener that illustrates all that Justified does well. 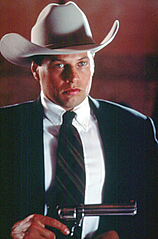 The first guy to play Raylan looked like Vincent D’Onofrio in the troubled times, or Michael Gladis in his Eagleheart fatsuit.

The episode opens with a scene designed to make Mamadocki happy: Raylan’s estranged wife Winona (Natalie Zea, The Following) at their baby’s crib. (Mamadocki is a Raylan/Winona shipper. She indeed liked the scene, though she thought the baby was ugly. Considering I’m her son, she knows a fair bit about ugly babies.) Winona wonders what could be more enticing to Raylan than being with his baby daughter. The answer? Mexico. If Raylan Givens (Timothy Olyphant, Hitman) loves one thing, it’s fucking people up when they fail to politely cooperate with him; in this case he crashes his car into a Federale’s and drives the guy into US jurisdiction where his “star” means something. It’s a rather over the top sequence, but it’s great and successfully restates the premise of the series, that he’s willing and able to go to absurd, rather illegal means to do his job. What separates him from a Vic Mackey, say, is that Raylan’s concern is catching criminals, not lining his own pockets. In lesser hands that those of Graham Yost and the other writers it’d make him the “cop who crosses the line but gets the job done dammit” cliché but instead he’s a different animal than the anti-hero archetype regularly seen in cable and premium television. 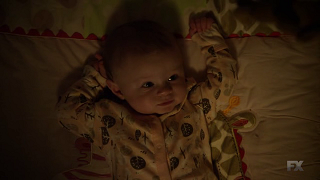 I mean, come on, that’s a pretty decent baby right there.

Although this marks the start of Season 6, “Fate’s Right Hand” is really the denouement of Season 5. Raylan abducts the Federale to find information on the deaths of Johnny Crowder et al.; Boyd (Walton Goggins, Major League 3: Back to the Minors) is back doing his bank robbing thing; Ava (Joelle Carter, American Pie 2) is back to being caught between two men in her life and of course there’s Dewey, poor stupid fuck Dewey Crowe (Damon Herriman, Son of the Mask). As last hurrahs go, this was a fine one for him, melancholy and hilarious all at the same time. Of all the dumb criminals to enter and exit the Justified universe, Dewey’s somehow the dumbest and the most endearing. He’s a bonafide Neo-Nazi who’s killed people and abused women and you can’t help but root for the little guy. Damon Herriman infuses the character with perhaps more soul than deserved. The death makes sense from a dramatic standpoint, but I have to admit I thought he was so too stupid to live it circled back to too stupid to die.

Dewey is released from jail because the lawsuit he filed alleging marshal harassment, from Raylan in particular, taints any kind of case the service makes against him regardless of the evidence. That’s a little shaky reasoning, but fuck it, let’s go with it. Here he finds a world with no place for him. The government seized Audrey’s, one of his girls is working at a diner, and Boyd wants nothing to do with him. Although he sees retrieving his beloved Turtle Dog as a sign, Dewey’s not smart enough to determine what that sign might mean. Dewey’s attempts to find a place in Harlan for himself that’s changing dramatically serves as the thematic spine of “Fate’s Right Hand”. 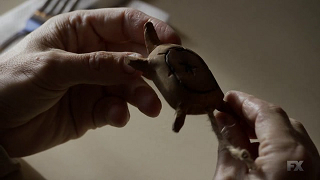 Boyd enlists Dewey with an important job, and by “important” I of course mean he’s a distraction for marshals while his gang pulls off armed robbery (that, to their chagrin, turns out to be a ledger). Dewey gets to tell off a cop at a roadblock, saying “Oh, they didn’t tell you who I am? I am Dewey goddamn Crowe, and I’m gonna keep on driving so I can save the state of Kentucky and the government of the United States of America another $300,000 for harassment, negligence, and general malfeasance, so have a nice day and kiss my ass.” It’s difficult to convey in text how many of those words he mispronounced, so just know it’s a lot. Raylan’s bemusement as Dewey frets over the duffle bag he’s meant to courier being full of underwear is a sight to behold. In a later scene, he angrily confronts Boyd. “Raylan broke my jaw!” “Why?” “I don’t know why!” An idiot knows 50% of what he says; a fool doesn’t know he only knows 10% of what he says. That’s why you can’t help but feel for the guy. Dewey doesn’t have great aspirations: he just wants his Turtle Dog, some money, some women, the dumb criminal lifestyle. But as Boyd shows at the end of the episode, wanting things to be the way they were, before all the blood, before all the history, isn’t gonna happen. I’m just sad Justified‘s court jester never got the $6 blowjob prior to his execution. It’s not difficult to draw comparisons to Steinbeck and I suppose a line to the effect of “Boyd, tell me again about the blowjobs” would be too much. 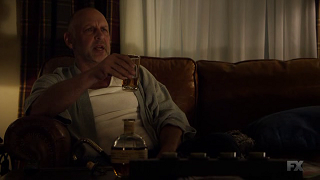 “What’ve you been up to, Art?”
“Oh, you know, I’ve found this website called Twitter where I can be a total ass to people from behind a screen.”

Nostalgia for the good old days and an acknowledgment that circumstances have changed in the time since runs throughout the episode. Boyd’s swastika arm tat makes its most memorable appearance in seasons, reminding viewers that the last time Boyd was committing armed robbery with explosives was while preaching Neo-Nazism. Ava’s back to living with a Crowder she’s afraid is going to kill her one day, and Raylan seeks to return to his wife, to Florida, after finishing one last case. Boyd wants to retire after one last job, leaving Harlan in favor of someplace with job opportunities beyond methamphetamine and repository for Raylan Givens bullets. Raylan’s a believer of fixed character: a criminal is a criminal, a lawman is a lawman, and when Ava protests that she’s no longer the woman who lulled Bowman Crowder into a feeling of security and set up his death, he muses “then, now, it’s the same”. A conversation with Art (Nick Searcy, saying dumb shit on Twitter), still indisposed from being shot, invokes the justified shooting that exiled Raylan to Kentucky in the first place. My favorite scene illustrating this theme introduces Garret Dillahunt as a bearded man with a briefcase of money wanting to buy up Arlo’s land. Raylan’s not sentimental, but he’s sentimental enough not to want to sell family property to the fuckin’ guy from Raising Hope. 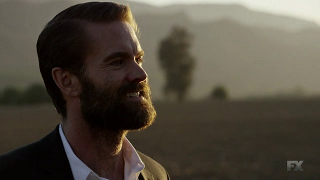 I couldn’t decide on whether he had a Joaquin Phoenix I’m Still Here beard or a beard of bees, possibly made from the Marvel Comics supervillain Swarm.

“Fate’s Right Hand” delivers its theme well, following characters trying to break patterns inherent to them and not necessarily succeeding. Doesn’t matter if a guy’s got a wife and baby a few states over, that’s not enough to pull one away from taking down the one criminal who’s evaded capture all these years. Within the subset of dumb criminals that populate Elmore Leonard’s oeuvre there are the self-aware criminals, the ones cognizant of the “One Last Score” cliché yet all too willing to fall into that line. That isn’t to say Justified is all the drastic consequences of a dangerous lifestyle. It’s also the only show that would have a character uttering the phrase “I’m so hungry I could eat the ass out of a low flying dove” and it not appearing out of place. They make sure to include enough Tim (Jacob Pitts, an episode of Strangers with Candy) and Raylan banter to satisfy. One of the larger drawbacks of the show ending with this season is it closes off the possibility of Tim and Raylan in a car, mocking each other, to continue indefinitely. Make it Comedians in Cars Getting Coffee but with slightly more shootings.

I hope you grimly tolerated my first of thirteen pieces on this wonderful program. I can promise you it’ll only get more readable from there, as a diversify the content of these recaps to include drinking games, “is it Timothy Olyphant or an elephant” and much, much more.

Next ArticleCan We Just Be Friends? Episode 30