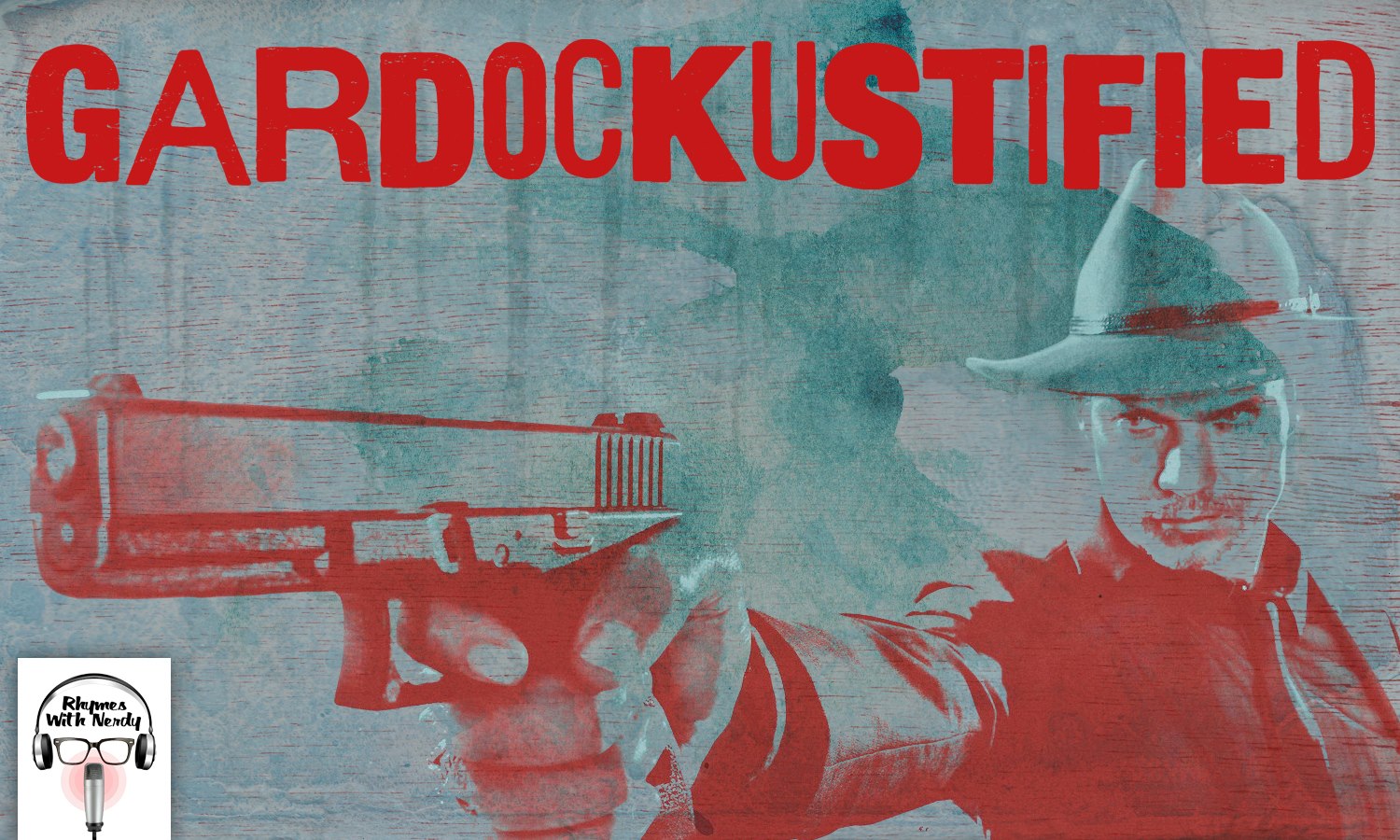 Let us all wear a conductor’s hat and pour one out for Choo-Choo, the character we never knew we needed until we saw him in that tiny car and he professed he “doesn’t follow”. Alas, the Justified henchmen survival rate is basically 0%, so he was gonna get got sooner or later. “Alive Day” is as good a send-off for our man Mundo as the premiere was for Dewey Crowe. Speaking of, this episode also remembers he exists, with Raylan using an investigation into Dewey’s disappearance as explanation for being at Ava’s after dark. I highly doubt Dewey’s murder will be Boyd’s downfall, but it’s nice to see that he has not been forgotten. Dewey’s death feels like years ago, in part because he’s been supplanted as comic relief. Don’t worry now, Dewey; you can hang out with Choo-Choo in Idiot Heaven. Man, imagine the conversations they’d have. I think the two would get along.

Justified smartly doesn’t commit to a love triangle this late in the game, the Raylan/Ava kiss being a moment that is soon brushed aside. They may still have residual feelings, but at best it’s a distraction. It does lead to a wonderfully tense situation when Boyd comes home, with references to another Ava/Boyd/Raylan situation in that house in “Fire in the Hole”. Speaking of which, man, the show would be so different if Crowder was killed off in the first episode as planned. You hear of things like how in Season 1 of Breaking Bad Jesse was fated to die originally, but Justified would be radically changed without Boyd as Raylan’s dark mirror. Anyway. The “is Ava fucked or totally fucked” storyline takes a back seat this week in favor of the fallout from Calhoun’s murder. (Well, until Limehouse makes a phone call with less than a minute left to go before the credits.) As with many narratives in Elmore Leonard’s universe, it begins with an idiot making a mistake. It’s possible had Choo-Choo not hit Calhoun so hard he ceased to be Markham’s plans would’ve continued unabated. Not a definite, considering the setbacks thus far, but possible. That one action, though, sets off a chain of events that makes Markham’s play fucked up beyond all recognition.

“Don’t worry, Mr. Markham, I’ve got another plan in my beard.”

Raylan sums up the problem with Markham’s mercenaries that serves as another distillation of an Elmore Leonard theme: “they know killin’, but they don’t know crime”. The results bear this out: they dump Calhoun’s body in a fashion where law enforcement finds it pretty soon and didn’t think to remove Raylan’s card from the guy’s pocket. Boyd, by contrast, is fairly good at making sure the missing stay missing. No one besides Choo-Choo and possibly the Incredible Hulk could’ve delivered the blow that ended Calhoun and what’s more, Calhoun’s favorite prostitute saw them with him shortly before his demise. Much like in the Middle East, they’re at a disadvantage because they don’t know the territory like the locals do. The cold open in which the Tiger Hawk boys are trying to figure out what their next move is funny, with Choo-Choo offering some thoughts on American Sniper’s kill count and blaming this whole mess on the others not allowing him to go after the skimming bartender (“you could’ve stopped this by letting me deal with the bartender, instead you let her skim and get me all boiled up”). Things come to a head when Seabass calls Choo-Choo a dumb ass and rightly points out they’re no longer in the army anymore. He seems like the only who realizes how screwed they are. 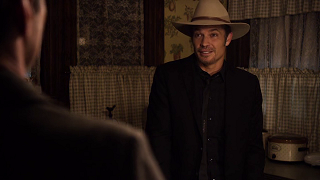 Timothy Olyphant’s contract stipulates at least one of these grins per episode.

Speaking of screwing, Markham and Hale’s affair has progressed to a marriage proposal and an accusation of ratting. If nothing else, the proposal allows Wynn and Mikey to muse over the four c’s that determine a diamond’s worth (“size doesn’t start with a ‘c’”, Mikey helpfully points out) and Markham’s proclamation about the rat muddies the speculation. The assumption of who rolled on Katherine’s husband drives this season’s actions (although Hale would likely steal from Markham regardless) and both the bad guys and the Marshals are trying to figure out the truth. Who could it be: Ted Danson’s wife? The guy from Ghost Rider? Jesse Pinkman’s NA group leader? Maybe Grady Hale ratted on himself, a time travel story not unlike on Red Dwarf when JFK had to shoot from the grassy knoll to prevent a horrible future. The possibilities are endless, and I’m sure a lot of dumb people on IMDB forums will be arguing about it for a while. Maybe Shelby could be the rat in a naked excuse to bring back Jim Beaver. It’s the network of Ryan Murphy programming, things don’t necessarily have to make sense. 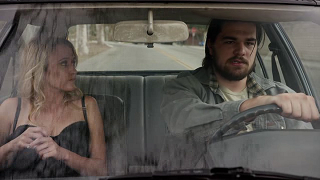 I imagined the scene with Seinfeld rear projection and audience laughter and it both amused and disturbed me.

There exists an undercurrent throughout the seasons of the place of veterans in American society. Nearly all the male characters this season have served, be it Tim and the Tiger Hawk Security guys in the Rangers, Boyd in Kuwait, Art and Markham in Vietnam and even Raylan spent time in the Marines. Most notably Justified explored the dilemma of a soldier who returns to civilian life with skills not applicable to that by comparing and contrasting Gutterson with Boyd’s army buddy Colton in Season 4. There are two options for returning vets in the Justified universe: law enforcement or crime, and these characters could’ve gone either way. A few seasons ago I wouldn’t have been surprised if Tim went DC Sniper. “Alive Day” emphasizes the effect of war with the Tiger Hawk trio; they still use military lingo and adhere to an identical hierarchical structure. They talk of their duty, their mission, when strongarming people into selling their property is less that and more an R-rated Scooby Doo plot. Markham appeals to Walker based on his Vietnam experiences and their common ground as soldiers. But Choo-Choo surprisingly offers the most pathos from this theme. 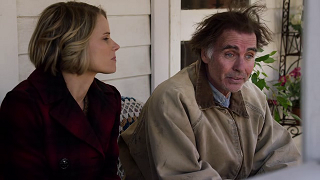 Joelle Carter had to take a shower between every take of this scene.

Here’s a man who got brain damaged in the war, is cognizant of his brain damage and how people treat him because of it, and has no useful skills beyond being really, really strong. Duke Davis Roberts (Gardockustified Player of the Game) deserves lion’s share of the credit in humanizing character. Another performer might’ve kept Choo-Choo as a mere caricature, a big dumb lug. The title “Alive Day” refers to the anniversary of a serviceman’s brush with death, and Choo-Choo’s life could be demarcated that way. We don’t know what he was like before he got shrapnel in his head, but it’s clear post-alive day his life required a lot of adjustments. While “being unsure about whether or not to murder a prostitute for witnessing last known whereabouts of a murder victim” doesn’t make Choo-Choo into a saint, it does show he’s more dimensional than I’d give him credit for in, say, his introduction. His final words, “it’s all I got”, before joining his fellow mercs in trying to kill Raylan and Tim, suggest he knows his limitations and can’t change. Before alive day and after, Choo-Choo is a loyal soldier through and through. Of course, Justified wouldn’t be Justified without a train man dying on train tracks because a real train was too slow or too aware what laid ahead to hit him. Mondo, you died the way you lived: in a car that when juxtaposed with your frame was hilariously ill-suited for you. 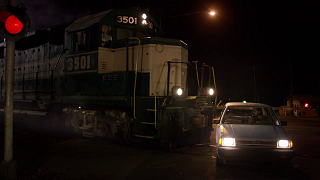 If it hit the car, the scene would go in my “Justified and Eagleheart are basically the same show” file.

On the Boyd side of things, Jeff Fahey tries to kill him, does kill The Pig (the sixty-eighth such Crowder underling death, I believe) and no one is surprised. I’d usually write more about this, but Choo-Choo died and The Pig is no Choo-Choo. I’m glad “Alive Day” included a scene of Ava and her uncle talking, and hearing about what happened to her father fleshes out her character. The mining subplot also reminded me of a Jeff Fahey trapped in a mine movie I saw a few months back by the name of Beneath. Spoilers: it sucked and the real monster was mine madness. Surprisingly, it looked worse than a solitary episode of cable television. Uncle Zachariah’s immediate attempted murder aside, it’s hard to say whether or not the operation will be worthwhile. By the time they tunnel in, Markham could’ve moved the money or ended up in jail. Hale and Duffy don’t appear interested in supplying resources and reinforcements to Boyd, so he’s got two men and a wily Jeff Fahey at his disposal. Odds are not in his favor. Here’s a tip, kids: don’t formulate a plan that can go tits up by Jeff Fahey kicking you down a hole. That’s what sunk Gray Davis.

Before I depart, I must weigh in on the most fascinating aspect of this episode. Raylan says the following: “Wonderful things can happen when you sow seeds of distrust in a garden of assholes”. Tim, no doubt ticked it beat out “Silver lining: you keep that card on you, cops ever find you buried in a shallow grave, they know to give us a call” as best line of the episode, asks if he came up with it. Raylan responds that he read the line somewhere. In truth, that is a quote from another Elmore Leonard book, Glitz. This means in the Justified universe, Elmore Leonard exists and he wrote some of the same books. Is this a situation like where on Futurama The Simpsons is a TV show and vice versa? Do Raylan books exist in Raylan’s world? If he read Pronto, would the world collapse on itself? Did he also see Be Cool and hate it? I’d like the final stretches of Season 6 to dispense with the plot and themes it’s beforehand built up in order to stage a nonsensical (well, MORE nonsensical) Crisis on Infinite Earths crossover between all filmed, televised and written versions of the Elmore Leonard canon. Carla Gugino Karen Sisco holding Jennifer Lopez’s Karen Sisco’s dead body, tears streaming down her face. Audiences would hate it and it would destroy all goodwill Graham Yost, the cast and crew have accrued over the last six years. We’d have to dig up FDR and force him to rescind Pearl Harbor’s status as a day of infamy and replace it with The Day FX became a metatextual nexus of continuity nerd masturbatory gibberish.

…still kinda want to see it, though.

Next ArticleCan We Just Be Friends? Episode 37