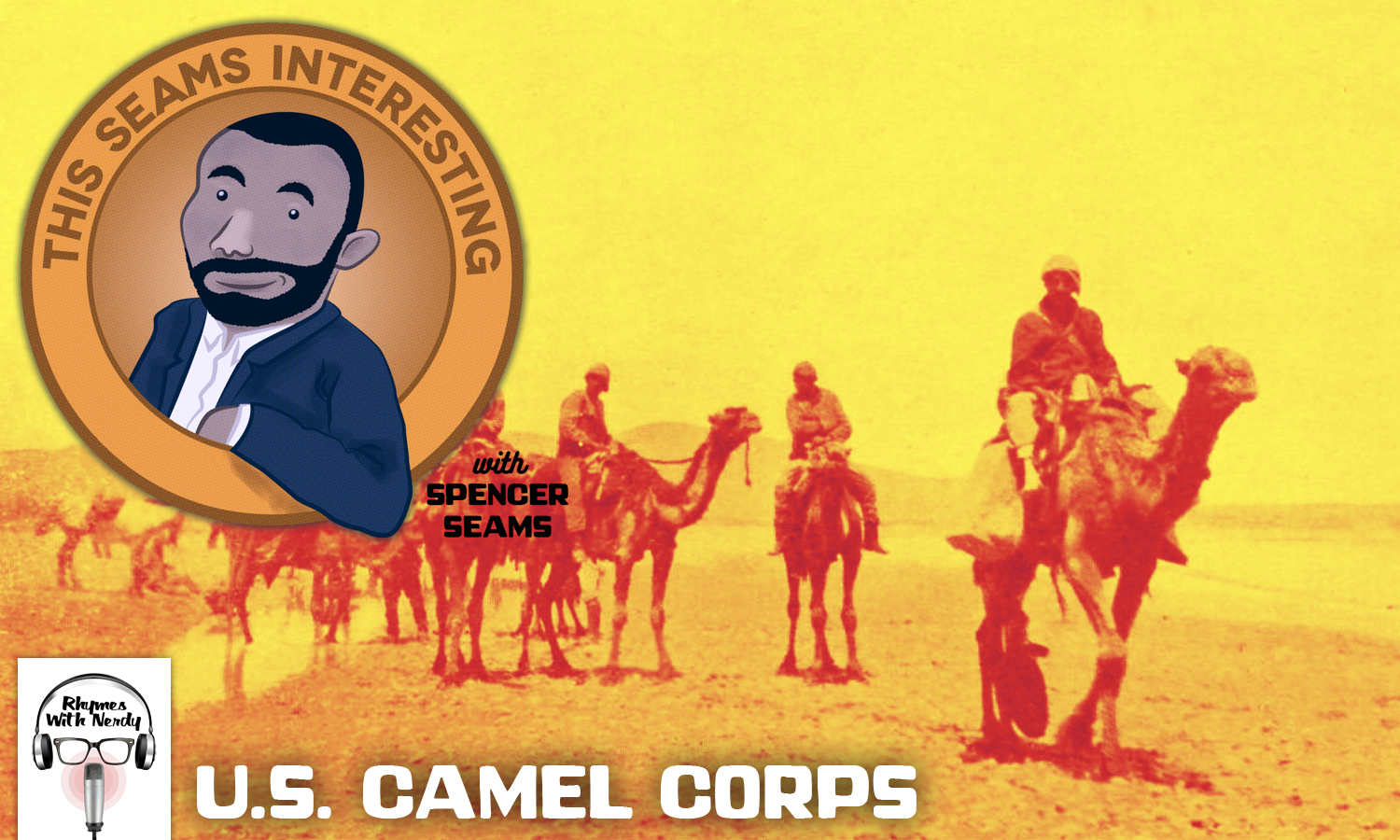 Hello and welcome, this is This Seams Interesting. It’s a monthly column looking at weird, interesting, and overlooked people and events throughout history. September’s topic is… 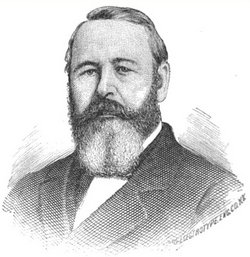 This is exactly what you think it is. There was a United States Army unit that specialized in camels. Was it a success? What does Jefferson Davis have to do with this exactly? How much money was spent on this? Read and find out the bizarre story of the Camel Corps.

The year is 1836. Army Lieutenant George H. Crosman along with E. H. Miller were on tour in the untamed West. They work for the Quartermaster Department. The journey is rough. Horses were okay for the trip but Crosman had a better idea. He suggested camels would make this much easier. They are perfect for the environment. Crosman and Miller completed their tour and then developed a report on why camels are the best option to make settling the West faster and easier. He cited, they can carry up to 900 lbs, go 30 to 40 miles in a day and go for up to 8 days with little food and water. Crosman and Miller turned in their report to the War Department. Before they had time to celebrate, the War Department responded with a resounding Nope.

This was not the first time, camels were considered for military use outside of their natural habitat. The Spaniards had tried a few centuries before in the Americas but it failed. They found camels to be too difficult to deal with and abandoned the project. The British tried using camels in Jamaica but that also failed for the same reason. 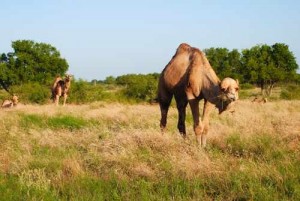 Camel in the Wild

Crosman was not deterred by rejection. He doubled down and continued his camel research on camels.

The Mexican – American War began in 1846. Crosman served and clearly saw how camels could improve military operations. Around this time, he met a fellow camel fanatic, Major Henry C. Wayne. He was a fellow officer from the Quartermaster Department. Major Wayne had also done a tour in the West and saw the need for camels. He had a connection in the War Department that could help. That was Jefferson Davis.

Davis had also spent time in the West and was completely on board with the idea. He tried to get it through Congress in 1848 and still no one was convinced. Camels were a secondary concern to the Mexican War. The trio of Davis, Crosman, and Wayne, still fervently believed in this project despite rejections. 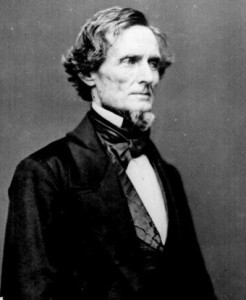 A few years later in March 1851, Jefferson introduced another camel bill for Congress. This was proposing a separate, experimental Army unit specializing in using camels. He wanted $30,000 to purchase 50 camels, hiring 10 Arab camel handlers, and other needed expenses for taking proper care of camel herds. Davis emphasized the history of camels, how they can be fully utilized for American military use, and how camels are superior to horses. Davis wanted to not only use camels for transporting goods and supplies but he also wanted to put small cannons on them to help fight the Native Americans. Dromedaries or Arabian camels (one hump) were requested. Congress shot it down, again.

Senator William Henry Bissell from Illinois, later the 11th Governor of Illinois and Congressional rival to Jefferson Davis, proposed nearly the exact same bill but instead of $30,000, it was $20,000, only a year later. The House voted Yes, but died in Senate.

The news of a potential camel bill going through created a craze over the foreign creature. In 1853,  the historian and linguist, John Russell Barlett was a big supporter for the bill. That same year, George Robins Gliddon, an Egyptologist, had spent 23 years in Egypt. He saw how effective camels are firsthand and wrote to Congress that it was, “feasible.” In 1854, pioneer environmentalist George Perkins Marsh, spoke at the Smithsonian Institution in support of camels. He even published a book on it 2 years later, “The Camel, His Organization, Habits, and Uses, Considered with Reference to His Introduction to the United States.” In New York, a club formed exclusively about camels, The American Camel Club. They paid for a shipment of camels in 1857. It landed in Texas later that year.

Going back a few years, Davis was selected as Franklin Pierce’s Secretary of War, in 1853. Jefferson Davis tried to get his camel bill through and on March 3, 1855 it went through both houses of Congress and became a reality. Davis now had $30,000 to build the Camel Corps. He wanted to be sure that everything would go perfectly so he sent Major Wayne and Navy Lieutenant David Dixon Porter to Europe and the Mediterranean for further research. Porter and Wayne shortly left for their European research trip/vacation.

They spent most of the trip separately to cover more ground. Wayne started his journey in England. He visited the Zoological Gardens while there he learned how to properly take care of them. If they can live in England, they can live in the USA. Next stop Paris, Wayne met with French soldiers that served in Algeria. They agreed that using camels would work. The French soldiers suggested that Arabian camels are the best for the purpose and climate.

Porter on the other hand initiated his branch in the Eastern Mediterranean via the ship, “Supply.” He got word of a massive camel farm in Pisa, Italy where 250 camels did the amount of work equal to 1000 horses. This was too good to be true. When he arrived there, the farmer told him that camels have been used in Italy for 200 years. The camels were according to Porter ‘mistreated,’ and ‘sickly.’ They were bred from a strong Egyptian herd but this was too good to be true.

Porter and Wayne met up in Spezzia, Italy. The next step was simple, adopt a camel, raise it together, and learn how build this new unit. They bought 2 camels from Mohammed Bey in Tunis and stayed in Tunis to raise the camels. They heard that Persia has good, well-bred beasts. Next stop Persia but there was a problem. A war broke out and a colossal snow storm hit during the trip. Luckily, Constantinople was nearby and they could buy some there. There were no worthy camels for military use. Porter and Wayne got word that Egypt had good camels for the unit.

They got down to Egypt and…there were camels, great camels at that. Porter and Wayne bought 33 for about $250 a piece. 8 camel handlers came along with them. Only 2 of them were actual camel handlers. The herd was mostly Dromedaries with a few Bactrian (2 humps) and a Tulu (hybrid- Arabian and Bactrian). The shipment was dropped off in Indianola, Texas in Kerr County. The herd was taken to Army posts around Texas in Houston, El Paso, and Bowie. A second shipment of 4 dozen was purchased in 1856. 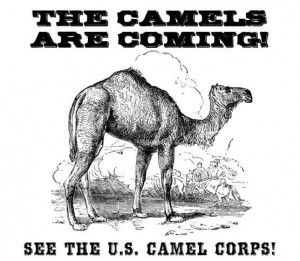 The soldiers didn’t like them. They were stubborn, ugly, and spit at them a lot. The other animals were initially weary but warmed up to them very quickly. Wayne successfully used them as burden-bearing beasts. This was followed up by doing several tests including mountain trails, mud, and traversing rivers. They passed but they were not used to water had difficulty with slippery slopes and rivers.

The locals took to them too quickly. A local poet wrote a wonderful poem praising the camels for the Indianola Bulletin. The children went on a camel rides. People came from all over Texas just to see these camels.

Jefferson Davis was replaced as Secretary of War in 1857. James Buchanan won the recent election and placed John B. Floyd, formerly the 31st governor of Virginia, as Secretary of War. Davis returned to the Quartermaster Department. Now, there’s a dilemma for the future of the project. Was Floyd as camel crazy as Davis?

Yes, he was. He authorized an expedition from Fort Defiance, New Mexico to California following the 35th parallel. This was prompted by a petition signed by 60,000 for the construction for a permanent road to California. Floyd chose the California Militia’s Brig. Gen. Edward Fitzgerald Beale to survey the territory. This was the perfect opportunity for the experimental unit. Beale had to bring 25 camels to see how they handle the trip. This was the real test.

Beale did not want to use camels. He left them at Camp Verde while prepping. Floyd was determined and made him take them. Beale left on June 25, 1857. Initially, Beale didn’t know what to do with the camels but, by late July his stance was reversed. The camels are worth the money. He wrote to Floyd, saying, “I have subjected them to trials which no other animal could possibly have endured.” The expedition reached the Colorado River on October 19. The camels took to the water and crossed with no problem. 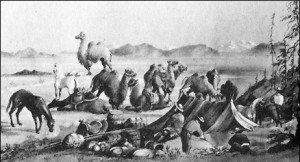 Sketch of the Beale Expedition

On the report back to Floyd, Beale said that it was a success and the camels are perfect for military use. He never mentioned that he left most of the camels in California for the soldiers there and that 3 died on the way there. Based on this success, Floyd went to Congress to order 1000 camels. It was denied. The United States Camel Corps Experiment was over.

The camels were sparingly used by the military afterwards. However, many businesses started to use camels for transporting goods out West. Even civilians got in on the action. In 1858, there was a local woman in Houston that ordered 2 cargoes of camels for her ranch. The person in charge of maintaining these herds and its handlers was Francis R. Lubbock, the 6th Lt. Governor of Texas and later 9th Governor of Texas.

The Civil War killed all the potential of using camels and overshadowed it. The camels were scattered throughout the west. No one knew or cared about what to do with them. The Confederates captured the Texas posts with camels during the American Civil War. The rest in California remained there for the few decades. The Confederates used the camels for transporting mail a few times and nothing else besides that. At the end of the war the animals were sold off to various people and businesses.

A weird side note, 3 of 5 people directly involved with the Camel Corps became major players in the Confederate States of America. Jefferson Davis was the President, John B. Floyd was a Brigadier General, and Major Henry C. Wayne was also a Brigadier General.

This was a successful experiment. Camels could have changed the outcome of American history but we’ll never know how much or to what extent. We could have had Billy the Kid strike fear in the heart of Old West banks on camelback or even better A Fistful of Dollars but the Man with No Name rides in on a camel. The possibilities are endless. It makes no sense that the experiment was cancelled but it’s a fascinating look at a part of history that should be more famous.

Next ArticleCan We Just Be Friends? Episode 55