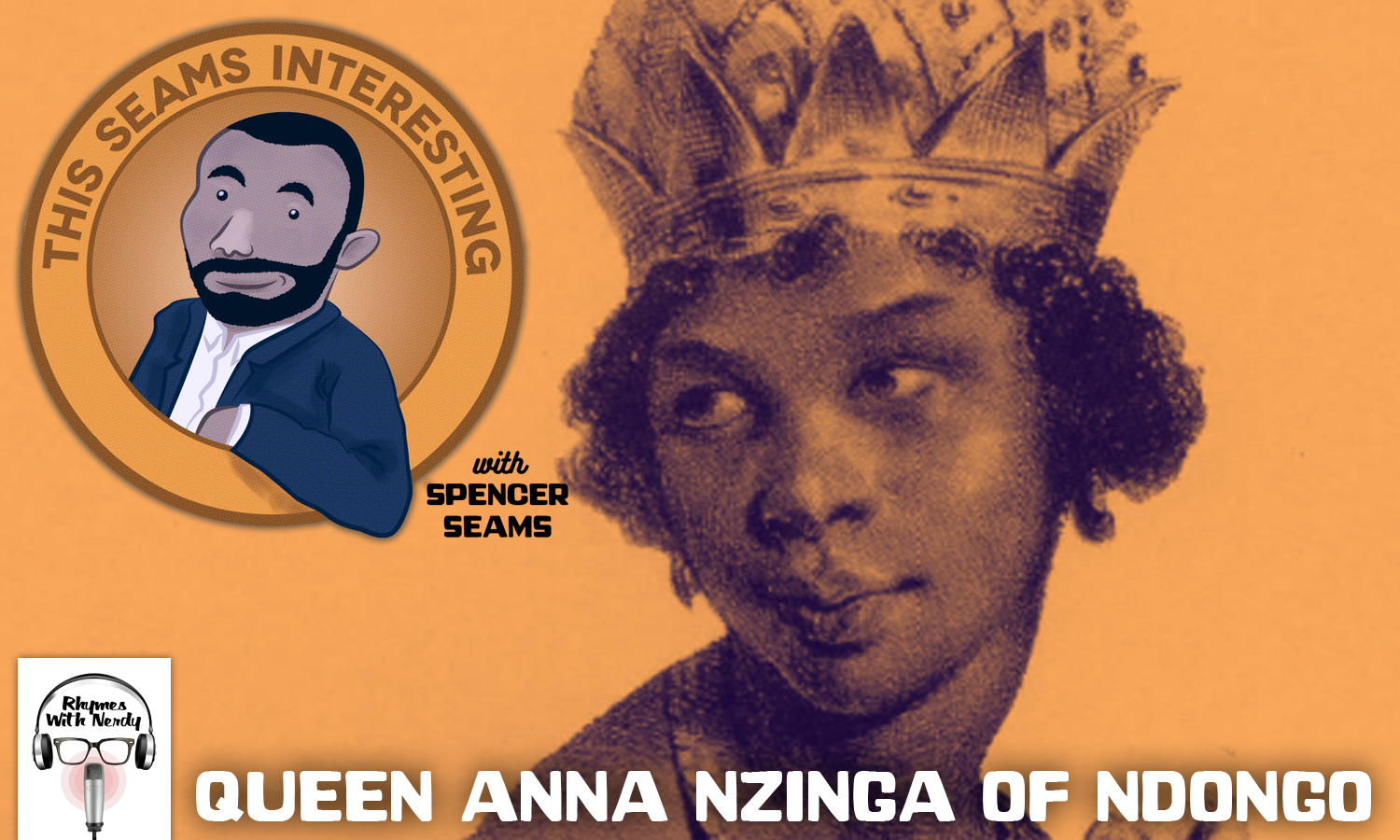 Hello and welcome, this is This Seams Interesting. It’s a monthly column looking at weird, interesting, and overlooked people and events throughout history. November’s topic is…

QUEEN ANNA NZINGA: The Humiliator of the Portuguese

This has taken far, far, far too long but I am finally tackling African history. I’m sorry and formally apologize for that. Also there are several spellings of her name, so I’ll refer to her as Nzinga to keep it simple.

Now, to the fun part, or not so fun part. The time is the 1500s CE, the slave trade in Europe was booming. Several prominent nations had strong claims in Africa and began colonization worldwide. Portugal had established a strong position in West Central Africa, using the standard method of capturing people against their will for slavery in colonies around the world. 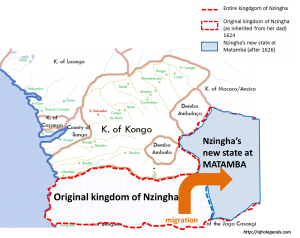 Naturally, not everyone involved was happy about this practice. In 1582, the French and British were making strong moves cutting into Portuguese trade. The Portuguese had begun raiding the Ndongo and Mbundu Kingdoms in modern day Angola as a result. That same year, Nzinga was born to Ngola (king) Ndambi Kiluanji and Kangela, Kiluanji’s 2nd wife. Nzinga was given her name because the umbilical cord was wrapped around her neck when she was born. She had a brother, Mbandi, and 2 sisters, Kifunji and Mukambu.

Her father had fought the Portuguese once they started taking his people and stealing his silver mines. The Portuguese called them the Angola because they were too lazy to actually learn anything about the Ndongo or Mbundu peoples. They mistook the word Ngola as Angola.

Nzinga was the favorite child. Kiluanji showed her all aspects of ruling a kingdom from military operations to diplomacy to dealing with other nobles. He even regularly took her on military campaigns and hunting trips. She received military training and knew how to hunt. In addition to this she received a top notch education. She was even fluent in Portuguese, which came in handy down the road.

Her father attempted to work with the Portuguese diplomatically but it never worked out. Mbandi took over in 1617. His father died under mysterious circumstances. He kept on fighting the Portuguese. This went rather poorly. After 5 years, he was desperate. Diplomacy was the only choice but who should he send? 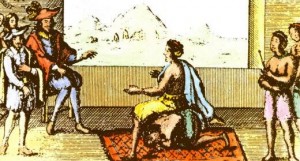 Nzinga left Kabasa, the Ndongo capital, with an entourage for Luanda, the nearest Portuguese port. The resident colonial governor, Joào Corria de Sousa, had only one chair for this meeting. It was for him. He had an Mbundu floor mat for her. This sounds like it shouldn’t matter (but hear me out first). In Mbundu culture this floor mat was reserved for those inferior to you while you had a chair or stool. Nzinga was his equal, and proved it. She had her a servant get on all fours as her seat. The Portuguese were wildly caught off guard and actually took her seriously as a result. A peace treaty was reached. A large part of the success came from her getting baptized as a Christian and taking the name Donna Anna de Sousa after Joào’s wife.

Upon her return to Kabasa, her brother died. It’s murky how this happened. Some speculate that she had her brother killed, some believe that he killed himself, some believe that he was killed by a third party. Either way, it was Nzinga’s time to shine. Her claim to the throne was challenged since the Ndongo Kingdom was still a relatively new centralized kingdom and several nobles didn’t want a woman ruling them. However, she had the support of the military. Also her son, Kaza was too young to rule so he was she ruled in his place. He died under mysterious circumstances shortly after her crowning. Some suspect that she had him killed but there isn’t enough evidence to really support this. This probably isn’t the case. Her sisters served as her key advisers. She was given full regent powers. She was the first female Ngola.

Under her reign, things turned ugly quickly. The Portuguese saw this moment of weakness and attacked Kabasa. They annihilated the city and burned it down. Ngola Nzinga had to move her people out of Kabasa. She moved the capital to Kidonga with the refugees from Kabasa. She lost the Ndongo kingdom but formed a new one, the Matamba Kingdom (centralized at Matamba in 1630). She had worked out more peace treaties with the Portuguese but only she actually honored them. The Portuguese continued to pester Nzinga forcing her to relocate a few more times and form a new army. In order to secure even the slightest buffer from the Portuguese, she allied with the Imbangala state nearby. In addition, she also renovated the military with the Kilombo. These were villages where boys were sent to be trained for the military. 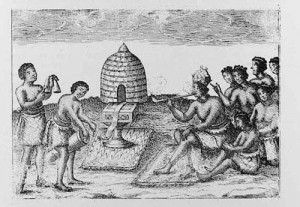 Nzinga is seen smoking in this engraving.

In the meanwhile, a puppet king was put up in Ndongo. Philip, he was related to Nzinga but she didn’t officially recognize him as the Ngola. One of her sisters was captured in the skirmish of various battles. She luckily found a way to still communicate with Nzinga.

During the 1630s, Nzinga herself, led troops in resistance. These campaigns heavily utilized guerillas tactics given the stark differences in weapons technologies. By 1639, the Portuguese were tired of fighting not only was Nzinga stronger than they thought but the neighboring kingdoms and states as well. A Portuguese priest and soldier were sent to discuss a peace treaty but these failed. They made some headway but not enough.

The fighting continued after the attempt at peace. In 1641, the Dutch with the Kongo kingdom seized Luanda. Quickly, they realized the Portuguese were the real enemy. They united. Nzinga moved her capital to Kavanga at this point. A few years later in 1644, with the allied kingdoms crushed the Portuguese at Ngoleme, a major Portuguese settlement, but did not completely defeat them. They regrouped and gave the united force a massive defeat at Kavanga in 1646. At this point, Nzinga’s other sister was captured and they raided her archives. The sister that had been a prisoner, for close to 10 years, was sending Nzinga Portuguese plans. That sister was drowned in the Kwanza River.

The Dutch helped by sending reinforcements and the fight continued. They assaulted the Portuguese capital at Masangano but again the Portuguese took her capital in retaliation. The war went back and forth for almost a decade more. Nzinga resisted until 1657. They signed a peace treaty. Each side honoured it this time. It even had a clause that made the Portuguese help her regain power, she didn’t have a living son to pass the throne onto. They attempted to marry off a noble or two but it never worked out. She still wasn’t safe from attempts by usurpers but none succeeded. She got the Ndongo Kingdom back and still reigned in the Matamba Kingdom. She transformed the kingdoms into economic powers. They became formidable for their businesses as opposed to military like before. 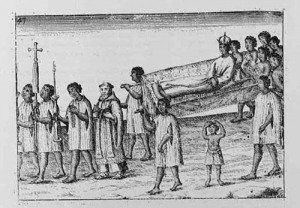 Ngola Nzinga died on December 17, 1663 peacefully at the age of 82. She fought in battle with her soldiers until her 60s. She offered refuge for former slaves. She was a vocal advocate for women. As much as she used war, she attempted peace. She was widely respected, even by the Portuguese. She should be known by everyone in every history class but she isn’t. She even had a harem of men that would fight to spend a night with her. She was in charge and everyone knew it.

It took a few more centuries before the Portuguese finally conquered the Ndongo and Matamba.