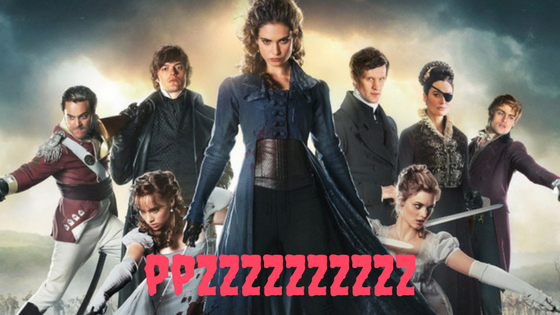 Sammi and Beau are back to talk Zombies, Wickham, and period drama half-measures in this episode of Excessively Diverted. While this wasn’t close to the worst of the movies watched for the show, it was nowhere near a favorite.

We won’t beat around the bush, this wasn’t a movie that we were terribly eager to watch. That being said, there were a few things we enjoyed: the Bennet Sisters’s basement training, Matt Smith, every time Lena Headey’s Lady Catherine became ruffled. The opening montage was well done and Charles Dance makes a great Mr. Bennet (or would, if he was given ANY screentime). The zombie effects were well done and we liked the opening scene for how bananas it was.

We were very confused as to why some regency rules still applied after a zombie apocalypse and some didn’t. Why does Lizzy seem to be the only one allowed to wear dark dresses? Why are there still balls and assemblies? Why is Darcy’s coat so loud, isn’t he supposed to be able to sneak up on the undead? Why do they need to say zombie apocalypse, won’t ‘apocalypse’ be enough on it’s own? Why is Elizabeth the stern, Mary-like sister? Not that any of these issues were dealbreakers, and ordinarily something as insane and over-the-top as a regency zombie story would be enough to guarantee our liking it, but the odd pacing and wooden acting weren’t enough to lock us in.

There was nothing truly offensive in this movie, it didn’t even come close to reaching the depths of despair that ‘A Latter-Day Comedy’ and ‘Material Girls’ plunged us into. It just…was. Though we will say were were not fond of Darcy’s great plan to feed the human brains to the good zombies of St. Lazarus, essentially committing mass murder.

Eh. Watch it on a sick day.

Next ArticleDeliver The Profile Episode 52: 1-800-SUICIDE