A few thoughts about NYCC, let me show you them.

It’s been a week since Sarah and I dragged our tired asses over to the Javits center to attend New York Comic Con, the first Con that I’ve attended that’s not Dragon*Con. Here are a few observations as to how it stacks up: 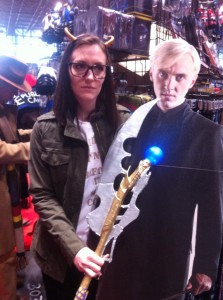 So overall NYCC is cleaner and more organized, which contributes a LOT to my enjoyment. But Dragon*Con is a lot more of a no-holds barred, full-tilt boogie extravaganza.

A feast for your eyeballs.

If you’re curious about what Jo and I discussed in the first episode, look no further than this 40-minute Dragon*Con video from the guys at Beat Down Boogie. See how many amazingly original/clever/nostalgic/technical costumes you can spot in all that time. My Favorites: Beebop and Rock Steady Dr. Zoidberg Hocus Pocus The Digital Underground Every…

Here’s some pleasure for your ears: Episode 1 of Rhymes With Nerdy. In this episode, Beth & Jo chat about cosplay, DragonCon and perceptions of women cosplayers. Take a listen and let’s hear your feedback in the comments. Or give a shout to the hosts at : Beth: tumblr | twitter   and   Jo: tumblr |…